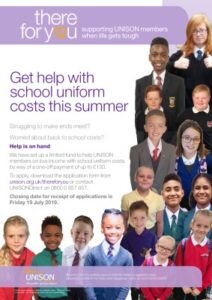 Get help with the cost of school uniforms

Families living on low incomes with children struggle constantly to make ends meet – and this can be particularly acute before the new school year begins when the extra costs hit hard. But it’s not all bad news – help IS available.

The union’s welfare charity There for You has once more set up a limited fund to help members on low incomes towards the costs of school uniform through a one-off payment of £40.

The process is very similar to previous years and an amount of money has been ring-fenced to support this initiative. However, once it’s gone it’s gone! So don’t miss out.

Apply early and send your form and supporting paperwork in as soon as possible. All the information you need can be found below. Alternatively, contact UNISON Direct on 0800 0857 857 for a form to be sent to you.

Just one more thing please don’t keep details of this grant a secret. Help us to help even more members and let your work colleagues know that help is at hand.

There will be many, like you, worrying about how they will be able to afford uniforms to send their children back to school in the Autumn.

Completed applications need to be sent to There for You, UNISON Centre, 130 Euston Road, London, NW1 2AY by Friday 19 July 2019 at the latest.