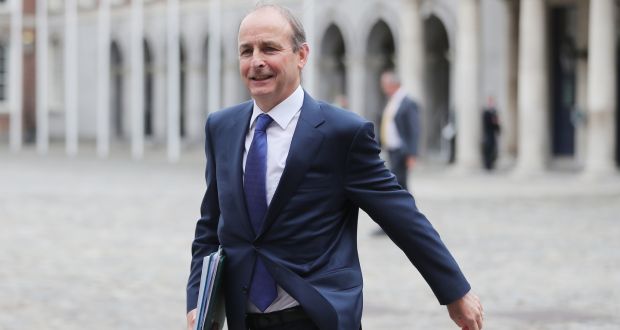 Taoiseach Micheal Martin has said relations between Britain and Ireland had been damaged during the Brexit process and needed to be improved upon.

From The Irish Times

Speaking on the Andrew Marr Show, Mr Martin said Ireland was taking a “cautious approach”, emphasising that all visitors would have to quarantine for two weeks if they came to the Republic.

“It is under constant review because there is a lot of volatility with this virus.”

Asked whether it was too early for British people to holiday in Ireland without being quarantined, the Taoiseach replied: “It is, yes.”

Mr Martin was asked what Britain would need to do to enable its citizens travel freely to Ireland.

“We are still, as our travel advisory, saying to people not to travel for non-essential travel. That is our advice to our citizens… Our priority is to get our schools open towards the end of August and to also free up capacity in our hospitals to deal with non-Covid illnesses.”

Mr Martin was speaking after the Department of Health recorded this week a rising number of new Covid-19 cases in the State linked to overseas travel.

There have been calls in some quarters for better policing of the 14-day quarantine. However, some figures in the tourism and travel industry, including Ryanair bosses, are lobbying for the scrapping of the quarantine entirely.

Separately in the BBC interview, Mr Martin reiterated his opposition to Sinn Féin’s call for a Border poll on a future united Ireland, he said “a lot of work” remained on building “peace and harmony” with the unionist tradition.

“The way forward is to continue to nurture the set of relationships…to work out how we can share the island of Ireland together…respecting each other’s traditions and concerns”. He pointed to the establishment in the Department of the Taoiseach, of a “shared island unit” which would “develop fresh thinking” on a future united Ireland.

“I want to inject greater momentum into the North-South dimension of the Good Friday Agreement in terms of practical pragmatic economic projects and activity.”

On Brexit, Mr Martin said “time is tight” on reaching a deal between Britain and the European Union on Brexit by the end of the year.

He also indicated relations between Britain and Ireland had been damaged during the Brexit process and needed to be improved upon, particularly for the sake of the Northern Irish peace process.

He called for greater urgency in negations between Britain and the EU. A deal was in all parties’ interests he said, but should not be reached “at any price”.

“I think we need an injection of momentum into the overall talks between the European Union and the United Kingdom in relation to Brexit. I had a very fruitful discussion with the Prime Minister Boris Johnson after I took up office…We both agreed that it’s in everybody’s interest, particularly in terms of businesses and giving them certainty and securing employment into the future, that we get a good comprehensive trade deal between the UK and the European Union.

“Our concern now is that time is tight. We are getting into an urgent time frame now.”

He said with sufficient political will resolutions could be found. “But so far the progress has been too slow in my opinion and we do need an injection of momentum.”

Asked if there would be a deal, he said: “I think there will be a deal. There has to be a deal. It can’t be at any price.

“It makes absolute sense that the UK should retain access to the European single market for its own benefits, but with that comes responsibilities and obligations as well and we all have to work on a level playing field. I see no sense in a no-deal Brexit…The ordinary people on the ground, the workers, will suffer if that is the case and all of us in politics must do everything we can to protect workers, to protect livelihoods.”

No matter what the outcome of the talks there would be no border between the Republic of Ireland and Northern Ireland.

“There won’t be a border. That’s agreed. The withdrawal agreement is agreed, the protocol is agreed. There can be no resigning back from that…I think Northern Ireland can get the best of both worlds here – continued access to the UK market but also access to the single European market. Northern Ireland needs development. It needs economic momentum.”

He had discussed British-Irish relations with the British Prime Minister since becoming Taoiseach.

“I was hearted by our discussion in terms of how to reset the British-Irish relationship post Brexit which I think the Prime Minister is keen on doing. I was particularly taken by that and we both committed to the necessity of doing that in a post-Brexit scenario.

If you develop symptoms of COVID-19, you should now book a test online. A further £15 million is available from the Scottish Government to support tourism. Argyll and Bute Council’s website provides information and support for local businesses reopening safely after COVID-19. Thanks As we deliver our final community food parcel, we wanted to give […]

Get a discount with the Eat Out to Help Out Scheme

The discount will be automatically available to you at participating establishments. Establishments will then claim a reimbursement from the government for the discount they’ve given you.

Think twice before signing up with cold callers

We’ve all heard stories of people being ripped off to the tune of thousands by rogue traders, be it for roof work that is shoddy or driveways that are never laid or cost thousands more than the original price quoted.

The ruling ensures the widest distribution of important information, says the SoE, and provides the best method for local councils and other bodies to enable citizens to be made aware of what is being proposed in their name.

BID TO RE-OPEN ROAD TO ARGYLL, BUT …

It would be used as a local diversion route from Saturday mid-morning, following a “full rigorous” safety assessment by Police Scotland and geotechnical specialists.

The SQA lowered about 125,000 estimated grades – and many students believe they were penalised during the moderation process because their schools have historically not performed as well as others.