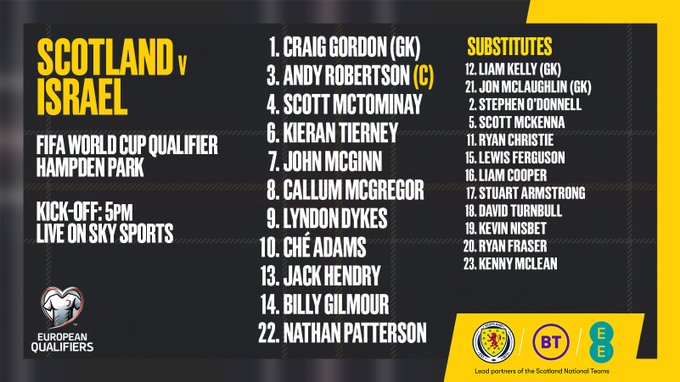 West Dunbartonshire will raring up to cheer on local boy John McGinn in the Scottish team to meet Israel at Hampden Park soon.

His brother, Paul, who came on as a substitute in the last game has disappointingly been left out of the squad by manager Steve Clarke.

John McGinn , who plays for Aston Villa, has starred in every match he has played for the national team so far. Paul plays for Hibernian.

But Paul – both players are grandsons of Dumbarton man, Jack McGinn, who was chairman of Celtic in their 1988 centenary year, only had 15 minutes on the park in the last match to stake a claim as one of the first choice players for today.

The footballing McGinns who have a big West Dunbartonshire connection – Paul, John and Jack.

Nathan Patterson has been given the nod to start in defence as Scotland prepare to face Israel at Hampden.

Steve Clarke has named his side for the World Cup qualifier, where a win for the national team is crucial to hopes of reaching the play-offs for a place at Qatar 2022.

Craig Gordon starts in goal, with Andy Robertson at left wing-back and Patterson on the right flank.

In Grant Hanley’s absence, Scott McTominay, who has family connections in Hewlensburgh, is in a three-man central defence alongside Kieran Tierney and Jack Hendry.

… with  Iain Gordon and Martin Greenhorn at Queens Park Cafe.

The Dumbarton Democrat is closing. Although successful in attracting many thousands of readers each week, this digital news platform can no longer sustain the level

END_OF_DOCUMENT_TOKEN_TO_BE_REPLACED

By Lucy Ashton A Green campaign which saw a record 60,000 objections lodged against a Flamingoland development at Loch Lomond has been rebooted after the

END_OF_DOCUMENT_TOKEN_TO_BE_REPLACED

Police Scotland is appealing for information following a suspicious fire in Dumbarton. Around 11.25pm on Tuesday, 31 May, 2022, police received a report of a

END_OF_DOCUMENT_TOKEN_TO_BE_REPLACED

CRIME: MURDER HUNT MAY BE CALLED OFF AFTER PRIME SUSPECT FOUND DEAD

END_OF_DOCUMENT_TOKEN_TO_BE_REPLACED

TRIBUTE TO US AMBASSADOR FRANK MEEHAN, WHO HAS DIED AGED 98 AT HIS HOME IN HELENSBURGH

END_OF_DOCUMENT_TOKEN_TO_BE_REPLACED

By Bill Heaney Going to the big match at Hampden on Wednesday night? You might just be able to get there by rail but, so

END_OF_DOCUMENT_TOKEN_TO_BE_REPLACED

By Bill Heaney Updated May 31, 2022 “It’s just a domestic,” I would hear them say when I listened into the police radio of an

END_OF_DOCUMENT_TOKEN_TO_BE_REPLACED

COUNCIL: Workers across every council in Scotland on verge of strike action