Incident happened near this part of High Street, Dumbarton.

Police Scotland is appealing for information after a 55-year-old man was seriously injured by another man in Dumbarton yesterday afternoon.

Around 2 pm on Thursday 20 June 2019 two men were involved in an argument on High Street outside the Captain James Lang Pub when one of them assaulted the other.

Police cars raced to the scene and other emergency services attended. The injured man was taken to the Queen Elizabeth University Hospital in Glasgow, where medical staff describe his condition as critical.

A 25-year-old man has been arrested and charged in connection with the incident. Inquiries are ongoing. 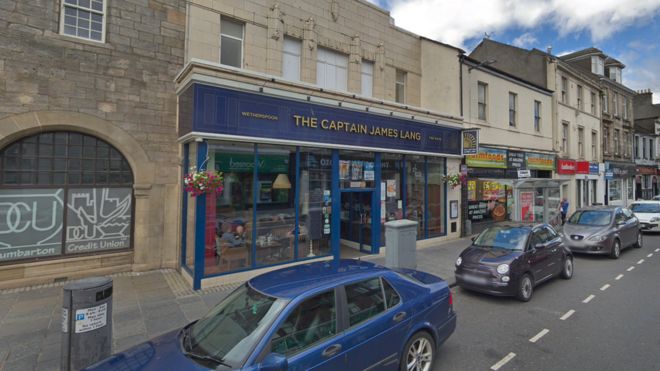 Scene of the assault outside the Captain James Lang public house in High Street.

Detective Sergeant Gordon Murray, who is stationed at Clydebank Police Office, said:  “We are currently carrying out inquiries to establish exactly what has happened here and are appealing for anyone with any information to come forward.

“The street would have been busy at this time of day and we know that there were a number of people in the area with their mobile phones out at the time. We are asking these people who may have footage of the incident to get in touch with us.”

Anyone with any information is urged to contact Police via 101, quoting incident number 1777 of Thursday 20 June 2019. Alternatively you can contact CRIMESTOPPERS on 0800 555 111 where information can be given in confidence.