Prime Minister Boris Johnston gets his wish to go to the polls.

By Denis Staunton and Bill Heaney

Britain was this week on course for a December general election after British prime minister Boris Johnson abandoned plans to push his Withdrawal Agreement Bill before voters go to the polls.

As The Democrat went to press on Tuesday morning, it emerged that the Labour had agreed to push the red button and  that Jeremy Corbyn had given his assent to the election, which will take place on either the 9th or 12th of December.

The Argyll and Bute seat, which falls within the Westminster boundary, is currently held by Brendan O’Hara for the SNP, whose task against unknown opposition will be made all the harder by the Royal Navy’s announcement on Monday (See yesterday’s Democrat) about an increase in the number of people employed at the Clyde Naval Base at Faslane and Coulport rise to almost 9,000.

This major issues of nuclear weapons plus abortion and gay rights, employment, the Loch Lomondside environment, and the dire performance of the SNP-controlled West Dunbartonshire Council implementing austerity measures when none was needed,  will be high on the agenda for the December election.

Argyll and Bute was one of the few four-way marginal constituencies in Britain. The Liberal Democrats held the seat from 1987, when they took it from the Conservatives, until 2015 when the SNP won the seat. The equivalent seat to Argyll and Bute in the Scottish Parliament was lost to the SNP in 2007, and was again taken by the SNP in 2011 and 2016, with Labour representing the overlapping constituency of Dumbarton to the south-east covering Helensburgh and Lomond. It is widely believed that the new boundary was created for Argyll and Bute because West Dunbartonshire had styled itself as a “nuclear free zone” 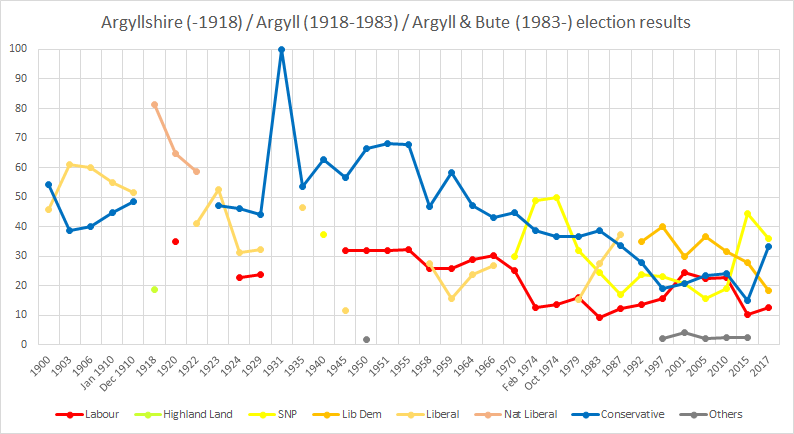 Look out for feelings running high at public meetings as candidates clash before the electorate goes to the polls.

This is a clear indication that the UK government intends to hold on to what it has and have no truck with the anti-nuke SNP’s appeal for a second referendum on Scottish independence.  O’Hara’s slim 1,500 plus majority looks fragile in all the circumstances.

There is no news yet of a Liberal Democrat, a Brexit Party or single issue candidate who could still come forward before the nominations close.

The boundaries for the Westminster and Holyrood seats are different with Jackie Baillie MSP holding the Scottish Parliament seat which will not be is not up grabs in December.

The prime minister failed on Monday to win the necessary two-thirds majority for an early election under the Fixed-Term Parliaments Act. However, opposition parties signalled they could support a Bill on Tuesday that would bypass the Act to give the go-ahead to a December poll.

“The house cannot, any longer, keep this country hostage,” said Mr Johnson. “I don’t believe this paralysis and stagnation should be allowed to continue.”

The new Bill to authorise an election requires only a simple majority and unlike Monday’s motion it can be amended. Downing Street sources said on Monday night, however, that a December 9th election would mean a dissolution of parliament within days, and would not allow enough time to pass a Northern Ireland budget Bill that is needed to keep public services running.

Labour leader Jeremy Corbyn, whose party abstained in Monday’s vote, said he did not trust Mr Johnson, but that he could support an early election once he was certain that there was no risk of a no-deal Brexit.

“We will obviously look at and scrutinise that Bill. And we look forward to a clear, definitive decision that no deal is absolutely off the table and there is no danger of this prime minister not sticking to his word – because he has some form on these matters,” he told MPs.

Mr Corbyn also warned that an election on December 12th could disenfranchise third-level students, for many of whom the term ends the following day.

Earlier on Monday the EU agreed to accept the British government’s request to delay Brexit until January 31st, 2020, but said Britain may leave on the first of any month until that date once the withdrawal agreement is ratified by the Commons.

Mr Johnson, who won the Conservative leadership contest pledging to deliver Brexit on October 31st “do-or-die”, was forced by MPs to request a delay to ensure Britain could not leave the EU without a deal.

France worked with Ireland, Germany and officials of the European Council over the weekend to frame the terms of the extension. The declaration “firmly” excludes any reopening of Brexit talks in the future.

The UK was also told it must also fulfil its treaty obligation to nominate a commissioner to the new commission even if he/she may only serve for two months during the extension. Failure to do so would create legal problems for the formation of the new commission.

In answer to a question from the DUP’s Ian Paisley on Monday, Mr Johnson said he would campaign in any forthcoming election for a mandate for the deal he agreed with the EU earlier this month.

The DUP abstained in Monday’s vote, although their leader, Arlene Foster, was said to be swithering on the Irish language question, which led to Stormont failing to sit for the past two years.

END_OF_DOCUMENT_TOKEN_TO_BE_REPLACED

Sturgeon should resign if she broke ministerial code, says Labour leader Sarwar By Democrat reporter First Minister Nicola Sturgeon  is the focus of an investigation

END_OF_DOCUMENT_TOKEN_TO_BE_REPLACED

SALMOND INQUIRY: Former FM tells Baillie ‘there absolutely should be [a further] police investigation of the matter’

Former First Minister Alex Salmond told Dumbarton MSP Jackie Baillie that there should be a further police investigation into the leak of documents. By Bill

END_OF_DOCUMENT_TOKEN_TO_BE_REPLACED

SALMOND INQUIRY: The Government acted illegally, but, somehow, nobody is to blame.

By Alex Salmond, former First Minister of Scotland This inquiry is not about me. I have already established the illegality of the actions of the

END_OF_DOCUMENT_TOKEN_TO_BE_REPLACED

Margaret Smith was knocked down while walking her dog on the seafront in Oban. By Democrat reporter Police officers are continuing Inquiries into a fatal

END_OF_DOCUMENT_TOKEN_TO_BE_REPLACED

HERITAGE: Kilmaronock Old Kirk will be made available for community use

By Democrat reporter A historic Loch Lomondside kirk, where luminaries such as Brigadier Alistair Pearson and Lord Fraser of Allander are interred in the ancient

END_OF_DOCUMENT_TOKEN_TO_BE_REPLACED

Lawyer who helped fraudster run £1.6m scheme struck off list Police Scotland picture of Edwin McLaren who was jailed for 11 years in 2017 for