If a protest is not a success, numbers can be very easy to calculate, but what about when thousands of people hit the streets?

The Scottish independence march organised by All Under One Banner on 5 October led to a variety of estimates, but the figure most often quoted was from the organisers, who claimed that 200,000 people had attended the rally.

This number was picked up by The National newspaper, as well as leading SNP politicians. Some, including MP Joanna Cherry, suggested 250,000 attended the march.

What a day! 250,000 behind us marching for independence @AUOBALBA @YesScot @theSNP 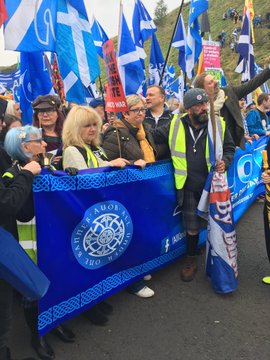 The People’s Vote march in London on 19 October led to even larger numbers being reported. Organisers estimated one million people took to the streets. This figure was reported by a number of major newspapers and politicians. Some, including former Labour spin doctor Alistair Campbell, claimed reports of 2.2 million.

How are crowds counted?

Estimating crowd size is not an exact science, and there are a number of different ways it can be done.

The most famous method was developed by Herbert Jacobs, a journalism professor at the University of California. The Jacobs method works by dividing the crowd into equal square sections, counting the number of people a few squares at random to get an average density, then multiplying by the number of squares.

However, this method works better for static demonstrations or crowds such as political rallies or, for example, the US presidential inauguration attendance. Fact checkers were able to easily disprove claims from the White House that Trump’s 2016 inauguration had been attended by more people than Barack Obama’s inauguration in 2009 by looking at images taken on both days which showed the size of the respective crowds.

Measuring moving crowds can be more difficult, as it is hard to accurately estimate the size of a moving mass which can ebb and flow in size as the event continues.

On method is ‘heatmapping’ which uses mobile phone or WiFi signals to identify the number of devices to create a ‘heat map’ which can give an indication of the number of people in a given location. However with city marches it can be difficult to separate signals from other people who happen to be in the area.

RAMP (route, area, movement, people) analysis looks at the entrance and exit areas of the marching area, the size of the route and the movement of the people within it, together with the sort of person involved.

One widely used tool used to estimate crowd size is MapChecking, which uses Google maps and density of people to come up with a workable estimate.

The density of the crowd is the hardest part of crowd estimation. MapChecking uses the models by crowd expert, professor Keith Still, who has created visualisations of different crowd densities.

A good rule of thumb, according to professor Still, is a density of around 2.5 people per square metre for moving parades.

All Under One Banner

The All Under One Banner march in Edinburgh started near to the Scottish Parliament and made its way through the streets of the city centre towards The Meadows, where a static event with speeches and entertainment took place.

Using this route, we can see that an attendance of 250,000 as claimed by Joanna Cherry MP is unlikely. With the entire route of the march and a huge swathe of the final congregation area filled at a density of four people per square metre, the estimate would only reach 197,000 people.

All Under One Banner 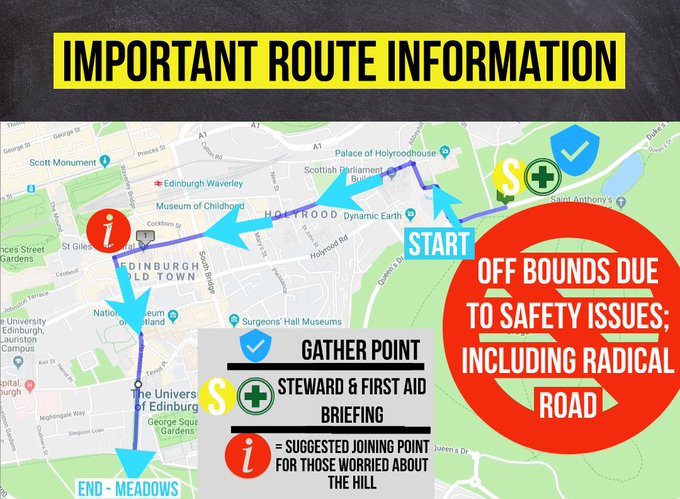 The estimate provided by All Under One Banner also seems very unlikely, given the footage available on the day.

Livestream footage of the Meadows shows a much smaller crowd gathered throughout the speeches.

Much of the march was captured by drone footage which showed the attendees at around 1pm, the planned start time.

Using the MapChecking tool to map the approximate area with a density of 2.5 people per square metre we estimate that if the whole route was fully covered, there would be likely less than 100,000 people marching. It is likely that people joined the march after the start time, and some specifically joining the march at an advertised entry point around half way along the route. However, it is unlikely that they did in sufficient numbers to allow 200,000 to be an accurate estimate of numbers.

The Final Say march organised by the People’s Vote campaign on 19 October was easier to estimate, as there was aerial footage available showing the whole route from above. This enables us to use mapping tools to estimate the density of the crowd and therefore give an indication of the size of the crowd.

Organisers came up with an approximate figure of one million, and explained how they arrived at the estimate.

“In assessing the size of the march, organisers took in information from staff and volunteers on the ground along the entire march route from Park Lane to Parliament Square, as well as examining aerial footage,” reported the New European.

A spokesperson for the People’s Vote campaign said: “It is impossible to put an exact figure on the size of this immense crowd because it is an open route spilling out across central London.

“But indications can be taken from flow and fill rates and crowd density monitoring.

They added: “At the time the rally began, and for a significant period of time after the start, people were still arriving in Park Lane.

“Our assessment is based on professional advice and whatever the exact number, there can be no doubt that this ranks as one of the greatest protests this country has ever seen.”

Live aerial footage of the march taken by BBC News after the attendees had set off from the start point on Pall Mall shows the march route and Parliament square busy with protesters.

While there were likely people who attended the march but were not picked up when the aerial footage was recorded, perhaps leaving before or joining after, it is very unlikely that they were large enough in number to come to the estimate of one million suggested by the People’s Vote campaign.

Should we trust crowd estimates?

Be wary of very large estimates from the organisers behind a protest march or demonstration. It is very difficult to come to an accurate figure without being able to see the whole event filmed or photographed from above. It is likely that the upper estimates for the All Under One Banner event in Edinburgh and the People’s Vote march in London are too high, given the area of the route and the footage available of the events.

Ferret Fact Service (FFS) is a non-partisan fact checker, working to the International Fact-Checking Network fact-checkers’ code of principles. All the sources used in our checks are publicly available and the FFS fact-checking methodology can be viewed here. Want to suggest a fact check? Email us at factcheck@theferret.scot or join our Facebook group.

DEMOCRACY AND OPEN GOVERNMENT ARE ANATHEMA TO SNP IN WEST DUNBARTONSHIRE

The Sheep Hill quarry which is at the centre of the planning dispute in Milton and Bowling. NOTEBOOK by BILL HEANEY I have said in

END_OF_DOCUMENT_TOKEN_TO_BE_REPLACED

Erskine Veteran Steve Wylie finds it difficult to use public transport. Now, Erskine hopes to hit the road after launching a fundraising drive for a

END_OF_DOCUMENT_TOKEN_TO_BE_REPLACED

LAW AND ORDER: 8% of adults were victims of a property crime, and 2% experienced a violent crime

Police on patrol in Dumbarton (top picture by Sean Davenport) and Vale of Leven (bottom picture by Craig Jump of Turkey Red Media). By Democrat

END_OF_DOCUMENT_TOKEN_TO_BE_REPLACED

HMS Spey sets sail past Dumbarton Rock and away from the Clyde as BAE Systems  delivers £635m contract despite coronavirus. By Democrat reporter BAE Systems

END_OF_DOCUMENT_TOKEN_TO_BE_REPLACED

Senior classes need more teachers and bursary scheme is designed to attract them. By Democrat reporter The STEM bursary scheme to encourage more people to

END_OF_DOCUMENT_TOKEN_TO_BE_REPLACED

By Democrat reporter Yesterday in the Scottish Parliament, Scottish Labour tabled an amendment to raise the pay of all social care workers to £15 an