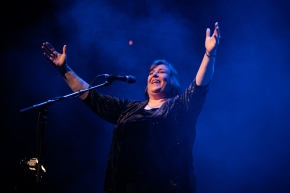 Cherish the Ladies – one of the many big hits at the Celtic Connections Festival.

IT’S all over for another year. Since January 16, performance venues across Glasgow have resonated with the sound of whistles, fiddles, pipes, electric guitars and glorious song. But now, after 18 days and nights of sparkling music and celebratory events, Celtic Connections 2020 has drawn to a close.

However, Celtic Connections 2021 is already on the way. Next year’s festival will take place from January 14 to January 31, and organisers have begun work on the colossal task of scheduling an event that this year saw more than 2,100 artists from around the world take part in more than 300 events on 29 stages across the city.

With attendances of around 130,000, Europe’s top winter music festival proved to be a huge draw for audiences from across Scotland, the UK and around the world.

“The end of the festival is always a bittersweet moment,” said Celtic Connections’ Creative Producer Donald Shaw. “Though it’s sad when the music stops, it’s also great to look back on such a successful event as this one, which has brought together so many talented performers and presented so many dynamic and creative collaborations. Feedback from our audiences and musicians has been fantastic.

“Programming an event on this scale is a huge logistical operation and after all the months of planning and organisation by such a dedicated team, it’s been wonderful to experience the festival in full swing. Bring on 2021!’’

This year’s programme was packed with highlights and special events. On day one, January 16, a spectacular Opening Concert at the Glasgow Royal Concert Hall saw the Grit Orchestra perform six brand new compositions. Commissioned through the Scottish Government’s Festivals Expo Fund to mark the 700th anniversary of the Declaration of Arbroath, the pieces were performed by the full, 85-piece, multi-genre orchestra with vocalists including Karen Matheson and a custom-written contribution from playwright and former Makar, Liz Lochhead.

Celebrating Scotland’s Year of Coasts and Waters 2020, Coastal Connections offered single-ticket access to a host of concerts, exhibitions and workshops, all linked to the unique heritage and culture of the country’s sea and shorelines.

Taking place on Saturday, January 18, it began with a splash as Storm – a spectacular, 10-metre sea goddess crafted by Vision Mechanics from recycled materials ­­– made her inaugural journey, strolling through the city streets to the Glasgow Royal Concert Hall. The largest puppet ever created in Scotland, she drew a huge crowd as she spread her message about the importance of caring for the marine environment.

That eco-conscious theme was at the heart of Coastal Connections. Inside the Glasgow Royal Concert Hall, ticket-holders enjoyed a feast of music from island and shore-based artists including North Uist’s Julie Fowlis, Tiree-based Skerryvore and Orkney’s Fara. The packed programme also included talks, workshops and events including a preview of the National Theatre of Scotland’s Ferry Tales and Launch! – an immersive performance combining footage from the Royal National Lifeboat Institution’s film archive with live music from beatboxer Jason Singh and singer-songwriter Jenny Sturgeon.

There were birthday celebrations for Scottish folk greats, Jimmie MacGregor (at 90), Archie Fisher (at 80) and Phil Cunningham (at 60). Another birthday – Bruce Springsteen’s 70th – was marked with two sold-out Roaming Roots Revue collaborations, musically directed by Roddy Hart & The Lonesome Fire along with a host of artists performing favourite tracks by The Boss.

There was also a Scandinavian flavour to this year’s festival. Each year since 2000, Celtic Connections has partnered with a country to create new international links and advance opportunities for their musicians. For 2020, the Showcase Scotland international partner for Celtic Connections was Finland, with leading and emerging artists featured in association with Music Finland.

Celtic Connections 2020 finally drew to a close. But if Glasgow seems unusually quiet this morning, music-lovers can take comfort from the fact that there are only 362 days until Celtic Connections, 2021.

Councillor David McDonald, Chair of Glasgow Life and Depute Leader of Glasgow City Council, said:  “This festival is always a high point of the year, and Celtic Connections 2020 has surpassed expectations. The quality of performances has been astonishing and it’s been wonderful to experience such a vibrant array of musical traditions and styles in so many venues. Undoubtedly, one of the highlights was the Opening Concert in the Glasgow Royal Concert Hall where six brand-new, world-class compositions had their premiere. The Grit Orchestra’s performance was triumphant.

“I’m also pleased that there were so many opportunities for people to experience the Celtic Connections festival spirit for free – whether through one of our schools concerts, attending a family ceilidh … or simply being among the crowd who watched the amazing spectacle that was Storm, as the 10-metre puppet made her way through the city on the morning of Coastal Connections.

“Glasgow is deservedly a Unesco City of Music – and Donald Shaw, his team and all those talented musicians, have done us proud.”

Culture Secretary Fiona Hyslop said: “This has been yet another excellent Celtic Connections, with 18 days of music by traditional and folk artists from around the world.

“I particularly enjoyed the opening concert celebrating the 700th anniversary of the Declaration of Arbroath, featuring new work funded by the Scottish Government’s Festival Expo Fund.

“This festival is just one way that Scotland’s cultural sector is working to grow its international connections – I am already looking forward to next year.”

Alan Morrison, Head of Music, Creative Scotland, said: “Celtic Connections is a shining example of how culture – and Scotland’s deep and heartfelt traditional culture in particular – can build bridges between people from all over the world. This year’s festival took place at a time when political landscapes were shifting around us and artists everywhere were facing up to fresh challenges.

“And yet, over the past three weeks, Celtic Connections has welcomed friends from abroad, introduced Scotland’s rising stars to new audiences, and found a common language in the instruments we play and the songs we sing. Throughout it all, music has brought us closer together with a spirit that is embedded right at the heart of this wonderful winter festival.”