On 6 February 2020 @UKGovScotland tweeted: “The prosperity of the UK delivers greater funding for Scotland’s public services,” and included an animated video that provided figures to back up the claim.

In response Michael Russell, the Scottish Government Cabinet Secretary for Government Business and Constitutional Relations claimed that Scotland in fact paid out more than it receives. 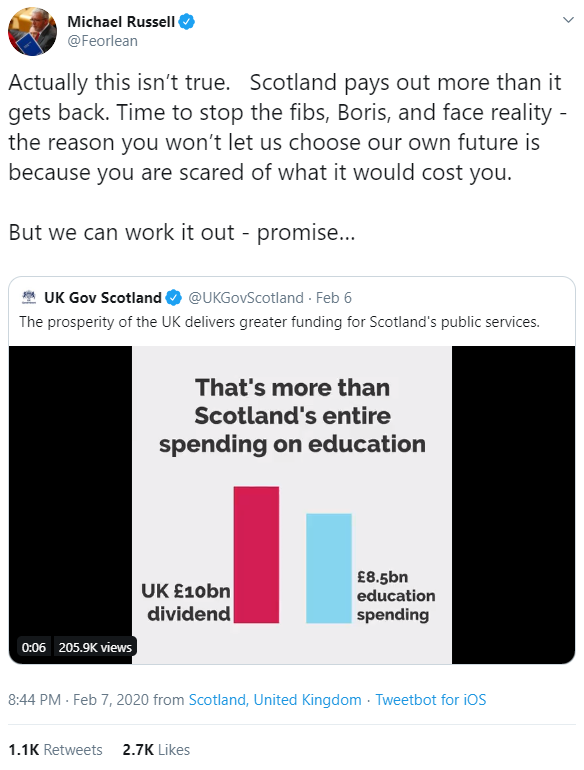 At the time of writing, the tweet from the Cabinet Secretary had received more than 4,000 likes, comments, and shares.

Details on the amount of tax raised in Scotland and public spending can be found in the General Expenditure and Revenue in Scotland (GERS) report published by the Scottish Government.

The most recent figures available are for the year 2018-19.

In that year, the report shows that taxes paid in Scotland amounted to £62.7 billion including a geographic share of North Sea oil and gas revenue.

Total public spending for Scotland by both the Scottish Government and the UK government in 2018-19 was estimated at £75.3bn.

Therefore public spending for Scotland exceeded the tax raised in Scotland by £12.6bn in that year. Spending has outstripped revenue from Scotland since around 1990, although in recent years the gap has decreased.

Some of this spending is ‘non-identifiable’, which means it is spent by the UK as whole and not necessarily in Scotland. This includes defence spending and debt interest payments.

Under current UK constitutional arrangements the amount of money raised from taxes in Scotland is less than the amount spent by the public sector in Scotland.

The Scottish Government has put forward a number of reasons why public spending per person is higher in Scotland than most other parts of the UK, including lower population density which “increases the cost of providing the same level of public service activity, particularly in areas such as education, health, and transport.”

They also cited costs for public services which are not provided in England such household water and sewerage services. The Scottish Government says that the spending also reflects “Scotland’s greater need for some public services such as in health and housing relative to the rest of the UK”.

Currently, Scotland provides less per person in revenues than the average across the UK. This has been the case since 2014-15 when Scotland’s north sea oil industry declined to the point that revenues were lower than the UK average even with the geographical share of oil and gas production.

Previous to this, Scotland was contributing more than its population share of tax revenues to the UK, but still received more in public sector spending than it raised in tax revenues.

Michael Russell was responding to a UK government tweet that included figures on the economic relationship between Scotland and England.

The animated video said that Scotland benefited from a “£10bn dividend” under the current constitutional arrangements. It cites the 2018-19 GERS report as the source for this figure.

This figure does not appear in the report itself but it can be calculated from the data within it.

GERS data shows that in 2018-19 £1,968 more was spent per person than was raised in taxes.  The UK government has multiplied this £1,968 figure by the current population of Scotland year to reach reach the figure of £10.6bn.

Civil servants have cautioned against using GERS data to calculate a figure for the amount of money transferred to Scotland from the rest of the UK. This is sometimes called the “fiscal transfer.”

In a response to a freedom of information request on this topic, Scottish Government officials said: “Official figures for any fiscal transfer are not available.”

“The reason this information is not available is that such a figure requires a number of assumptions to be made. For example, as the UK as a whole spends more than is raised in revenue, an assumption would need to be made about which parts of the UK borrowing is undertaken for, or which types of public spending are financed by borrowing as opposed to taxation.”

The GERS data is an official statistics publication produced by the Scottish Government. As such it provides the most accurate information available on Scottish public spending.

The latest report includes information on the margin of error associated with the figures that are estimated. Overall, statisticians calculated that the estimated figures used in the report have a margin of error of 2.2 per cent.

Claims that apply GERS data to support an argument about a notionally independent Scotland should also be treated with caution.

If Scotland were to become independent, it is likely that different political choices would be made about taxation and public spending. It is also likely that the structure of the wider Scottish economy would change.

The amount of money raised in Scotland from taxes is less than the amount spent in Scotland by the public sector, even when revenue from oil and gas in the North Sea is included. Therefore, the claim from Michael Russell that “Scotland pays out more that it gets back” is incorrect.

UK government figures in this tweet that calculate values for a “fiscal transfer” between the UK and Scotland should be treated with caution.

In response to a Ferret Fact service request for evidence, the UK Government provided an explanation of how they had calculated the figures in their tweet. The Scottish Government has not responded.

Ferret Fact Service (FFS) is a non-partisan fact checker, working to the International Fact-Checking Network fact-checkers’ code of principles. All the sources used in our checks are publicly available and the FFS fact-checking methodology can be viewed here. Want to suggest a fact check? Email us at factcheck@theferret.scot or join our Facebook group.

Note: An initial version of this fact check referred to public spending “in” Scotland. The wording was amended to refer to spending “for” Scotland on February 13. This change was made in order to reflect the fact that some spending allocated to Scotland in GERS does not take place in Scotland.