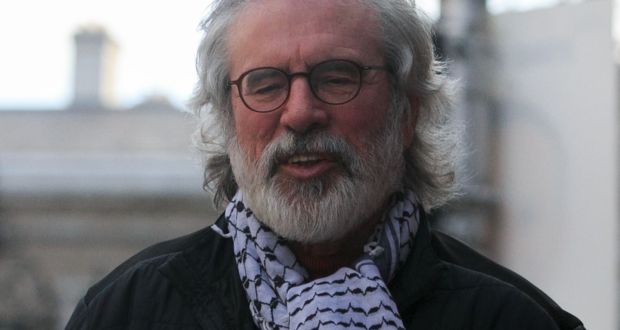 In this Manx flag of an election aftermath, three equal legs of competing parties spin continuously towards they know not what.

They may be spinning for some time. Perhaps, some fear, to no conclusion.

It’s a very strange situation. Sinn Féin, Fianna Fáil and Fine Gael, caught in a three-way tie after Saturday’s general election. How can a government emerge from the confusion?

The first working week since that game-changing vote is nearing an end. The big three are still coming to terms with the results, along with the smaller parties and independents also caught up in the political conundrum.

Everyone is exhausted. An elated Sinn Féin, having even surprised itself with a stellar performance at the ballot box, is still flying on the fumes of success. The smiling Greens and SocDems are also operating on adrenalin. Fianna Fáil and Fine Gael are still traumatised.

But one thing never changes in Leinster House – the evergreen mantra of politicians from all parties and none was pressed into action as soon as the weary troops returned to Kildare Street: Nobody wants an election at this point in time.

Sinn Féin TDs, having convincingly secured the most votes from an electorate hell-bent on demanding a change in how the country is run and how politics is done, say the people expressly gave them a mandate to govern and, effectively, the keys to Government Buildings. But party realists know the seat numbers don’t add up for them, even with the addition of smaller parties and a rag-tag assortment of independents. One of the other two main parties must come on board.

Fine Gael has blankly refused and is not for turning. Fianna Fáil has categorically ruled out Sinn Féin too. On Thursday in Leinster House, among the dazed but delighted newbies exploring the complex and the hurt and downcast former deputies wandering the precincts, Fine Gael was gone to ground, Fianna Fáil was sequestered in a basement, windowless room and Sinn Féin’s new, expanded Dáil team was busy stealing a march on them by grabbing all the attention and shouting loudly about an “appetite for change”.

In a scenario where the Dáil seat numbers don’t add up to compile a working majority, optics are hugely important.

Mary Lou McDonald marshalled her forces (with added Gerry Adams along for a gawk) and led them on their maiden voyage across the plinth following a parliamentary party meeting across the road in Buswells hotel. It seems some of the new TDs were only meeting colleagues for the first time, with a lot of hurried introductions going on.

Journalists were allowed into the packed Georgian Room to hear the leader’s speech, although the party press office had clarified the previous evening that the meeting itself was private and a question and answer session with Mary Lou would be facilitated back at Leinster House later on in the afternoon. This is not particularly unusual, despite a Daily Mail journalist getting very hot under the collar over this disgraceful attempt to curtail press freedom.

A deep voice rose from a seat along the wall near the top of the room. “The Man from the Daily Mail,” boomed Gerry Adams. This was a reference to a republican ditty of the same name, and of the type which might have been sung by a victorious Sinn Féin TD after an election count until intimations of government curtailed the singing of IRA songs in polite society.

The former Sinn Féin leader is still wearing an immobilisation boot following an iPad related accident. Gerry was at home writing with his iPad resting on his leg. He became so absorbed in his task the leg went to sleep and when he stood up his ankle buckled and he broke a bone in his foot.

As always, deputy leader Michelle O’Neill was brought along for the occasion. How the Sinn Féin’s leader in Stormont manages to get anything done up North these days is a mystery. It seems Mary Lou McDonald isn’t allowed to take part in any major public event without poor Michelle (who rarely gets a chance to open her mouth) being dragged along as the Northern Irish mascot.

Oblivious to the politics – Dubliners carried on as only they can in Grafton Street with the craic and the music. Pictures by Bill Heaney

The leader’s Buswell speech was supposed to rally the troops, but it was really designed to cast Fianna Fáil as a bunch of wimps who haven’t the bottle to go into government with Sinn Féin, as the people demanded, because they have no “appetite for change”.

Well, Micheál Martin, do you have what it takes? Do you? Is Fianna Fáil up to it? Are you up to it?

And should Fianna Fáil not go into coalition with Mary Lou in the end, let the people remember she gave them every chance. . .

If this were a sprint, Micheál and his team would have been on the back foot. But this is a long game.

Anybody But Sinn Féin

Back in Leinster House, while one of the Manx Flag three was out cavorting for the cameras and making entrance after big entrance, Fianna Fáil TDs were queuing up to get out the message that they will talk to anybody about putting a government together, except Sinn Féin.

ABSF. Anybody But Sinn Féin. And almost all members the new, slimmed down, parliamentary party, stuck to the line. They met for four hours, downstairs in Leinster House 2000 in a room which, it was hoped by the handlers, might not have a decent mobile phone signal. It didn’t matter, because TDs just had to nip out to the coffee dock where they could tell any number of the hacks hanging around what was going on.

Micheál broke his self-imposed isolation to go on the evening news.

“Any government formed has to be sustainable,” he said. Clearly a blatant attempt to woo the Greens.

“I wouldn’t rule out another general election, this is going to be so difficult.”

The Taoiseach, meanwhile, was out and about doing Taoiseachy things. He arrived in the lobby of Leinster House at teatime to sign the roll to activate his membership of the 33rd Dáil. Leo Varadkar looked very relaxed in his jeans and casual shirt, sipping a can of Diet Coke as he chatted to staff.

Former Labour party leader Pat Rabbitte was in on business. He’s loving the intrigue and excitement.

“It really is a very unusual situation,” he mused.

One from the Sixties. Jim McIntyre, father of the former Dundee United, Ross County manager of the same name, is hoisted high by his St Michael’s Boys’ Guild team mates after winning a tournament at The Murrough in Wicklow town during an annual camp there.

The number of people in Scotland who have died with coronavirus now stands at 41, and the number of confirmed Covid-19 cases is now 1,384

Not just in charge but looking after us in this crisis.

During his evidence to the court, Mr Salmond said the claims made about his alleged conduct were “deliberate fabrications for a political purpose” or “exaggerations”.

VIRUS: WORLD WEEPS WITH THE PEOPLE OF SPAIN

Earlier on Saturday, Fernando Simón, the head of Spain’s centre for health emergencies, said that the situation in some regions appeared to be improving even as the country reported another record single-day death toll of 832.

Dr John Ashton, a former regional director of Public Health England, said on Friday: “The government has been too slow to act on this, and they’ve been slow as individuals. I was surprised to see prime minister questions going ahead this week. It was clearly unnecessary.

VIRUS: STATISTICS FOR EACH SCOTTISH HEALTH BOARD

It is based on information published by the Scottish Government and collated by civic hacking project Code the City. It was commissioned by The Ferret to make historical data on the virus more accessible.

Johannesburg-based King had announced his intention to leave this month at the club’s AGM last year, when it was revealed £10m was required before the end of the season.