Changes to Scotland’s freedom of information (FoI) law which were narrowly agreed by Holyrood for the coronavirus crisis, have been condemned as “dismal” and “draconian” by campaigners.

Deadlines for public agencies to respond to FoI requests from the public have been extended from 20 to 60 working days. In some circumstances the Scottish Government can extend deadlines for agencies other than itself for another 40 working days.

This means that requesters could have to wait up to five months for an initial response, and then a further five months for the outcome of a review. That wait is five times longer than under previous FoI law.

Early indications suggested that the government was planning concessions to critics of the FoI provisions in its emergency Coronavirus (Scotland) Bill. But by the end of a hectic day of Covid-19 law-making in the Scottish Parliament on 1 April, only a few minor changes were made.

A concerted bid by Labour, the Conservatives and the Liberal Democrats to delete FoI from the bill and allow flexible arrangements to be made without changing the law, was defeated by the SNP government, which was backed by the Scottish Greens.

Six amendments lodged by the Greens and Labour to reduce the deadline delays and limit the number of public agencies covered were lost on the casting vote of the Presiding Officer, Ken MacIntosh, after votes tied 41 to 41. Unusually, the number of SNP MSPs voting exactly equalled the number of all other parties.

The only amendments agreed were those supported by the government. They replaced options for extra deadline extensions of 40 working days, with a ministerial power to grant such extensions to public agencies other than the government itself.

The Campaign for Freedom of Information in Scotland warned that the new law “will have draconian and far reaching implications on the exercise of FoI rights, just when people really need to hold public bodies to account for decisions made.”

The group’s convenor, Carole Ewart, said: “This is a dismal result and there is no way to dress it up. We provided MSPs with an evidenced briefing to adopt a non-legislative approach, but they chose to legally restrict enforceable FoI rights anyway.

“It sets a very bad example to other governments around the world who so far have resisted restricting FoI rights.”

Ewart added: “I am exceptionally disappointed that the Scottish Greens failed to prevent the government from bringing forward these draconian proposals and failed to mitigate the excesses of what was proposed. I also have concerns about how the Scottish Parliament’s system of tied voting is or is not working.”

Lisa Mackenzie, from the policy analysis collective, MurrayBlackburnMackenzie, organised an urgent letter from journalists urging MSPs to halt the proposed FoI changes. “With many other forms of scrutiny diminished, it is disappointing that ministers did not justify the length of the time extensions for FoI responses,” she said.

“Many people will be surprised to learn that the government chose to take advantage of an increase in its vote share as a result of absences due to Covid-19 to push through controversial measures – and that that the parliament collectively appears not to have been able to put in place any institutional safeguard against that.”

The joint letter was signed by 31 journalists and policy analysts from The Ferret, openDemocracy, Daily Record, The Sun, STV and elsewhere. The changes would “make the FoI system a far less effective mechanism for holding public bodies to account,” they said.

We are grateful to be joined by signatories drawn mainly from different areas of journalism, brought together very quickly yesterday evening, in asking the Scottish Parliament to take more time to consider what changes are needed to FoI law as part of its emergency response. 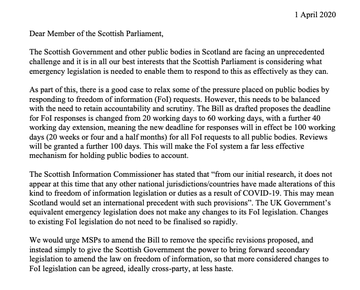 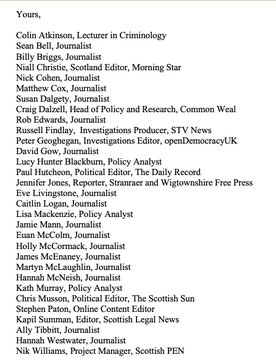 Twelve of the 20 amendments to the coronavirus bill’s FoI section were lodged by the Scottish Labour MSP, Neil Findlay, left.

His main aim was to delete the entire section, arguing that the government had “not justified the necessity and urgency” of the changes and that a “non-legislative approach” would be more constructive.

“We cannot abandon key elements of scrutiny and transparency at this critical time,” he said. “Greater transparency gives the public more confidence in what is being done in their name.”

The Liberal Democrat MSP, Alex Cole-Hamilton, said the bill was “setting up the FoI system for paralysis and opening the door to the suppression of scrutiny, particularly from journalists”. Tory MSP, Adam Tomkins, argued that the government was seeking “to shield itself from increased scrutiny”.

Findlay’s bid to delete the FoI section was rejected by 47 votes to 35, with the Greens voting with the SNP. Another of Findlay’s amendments sought to allow only sectors he said were under the greatest pressure from Covid-19 to delay responses to FoI requests. But this was defeated by the SNP and the Greens.

Other amendments by Findlay to reduce deadline extensions and allow extra funding for the Scottish Information Commissioner were also voted down. Three were backed by the Greens, causing the vote to split 41 for and 41 against.

According to the parliament’s Presiding Officer, he was then required to use his casting vote in favour of the government, meaning the amendments were rejected.

Green MSP, Ross Greer, left, lodged four amendments aimed at reducing the deadlines for public agencies to respond to FoI requests, and reviews of those requests. He wanted to reduce the maximum period in which public bodies could respond from 200 to 80 working days, he said.

Three of Greer’s amendments were defeated by the government on a tied vote. But ministers backed his bid to remove a provision allowing public agencies to delay responding to FoI requests by an additional 40 working days, after an initial delay of 60 working days.

This was replaced by a power for ministers to “specify circumstances” in which public authorities could get an additional extension up to a maximum of 40 days, in consultation with the Scottish Information Commissioner. The government also accepted that it couldn’t allow itself an extra 40 days.

Greer said it was “unfortunate that all but one of our Green amendments to roll back these unnecessary freedom of information measures were voted down by the SNP”.

He added: “These restrictions are completely over the top and undermine trust in government at precisely the moment it is needed. We limited the damage to transparency in Scotland today and we will reverse it completely at the first opportunity.”

Findlay, however, told The Ferret he was “very disappointed” that the Greens voted against his proposal to scrap the FoI section of the bill. “We could have followed other countries with a non-legislative common sense approach,” he said.

“Instead, now we are the only Western democracy to use emergency legislation to restrict scrutiny and transparency. That is not something we should be proud of.”

On 1 April we reported warnings from the Scottish Information Commissioner and campaigners that the delays could weaken scrutiny of public bodies at a vital time. In August 2019 we revealed that 20 public sector bodies were pushing to weaken FoI law by increasing charges, widening exemptions and relaxing deadlines.

20 public bodies pressing for restrictions on public right to know

In a briefing to MSPs before the vote on 1 April the Scottish Information Commissioner warned that the proposed changes to FoI law “may negatively impact on international perception of Scotland’s commitment to transparency and accountability”. The commissioner expressed particular concerns about allowing public agencies to delay responding by an additional 40 days.

Following the vote, the commissioner’s head of policy, Erin Gray, was pleased that the extra 40-day extension had been limited. “A balance must clearly be struck between ensuring the delivery of vital public services at this time and ensuring that decision-making around those services is open, transparent and accountable,” she said.

“The impact of Covid-19 and increase in the maximum statutory FoI response time from 20 to 60 working days will undoubtedly lead to delays for some individuals requesting information. However, our guidance for public bodies will make clear that this is the maximum time limit for response, and FoI law requires that public authorities respond promptly in all circumstances.”

Gray added: “Where an organisation has the capacity to respond within 20 working days or fewer, they should clearly do so. Our forthcoming guidance for public authorities will make this point clear.”

Requests for environmental information made under the Environmental Information (Scotland) Regulations 2004 would not be impacted by the coronavirus bill, Gray pointed out. She stressed that the new law was temporary and due to expire on 30 September 2020, though ministers had the power to extend it “if necessary”.

The Global Investigative Journalism Network (GIJN) reported on 31 March that other countries had restricted FoI rights during the outbreak. Brazil’s President, Jair Bolsonaro, introduced a provisional decree allowing officials not to supply requested information – but it was suspended by the country’s Supreme Court.

Extensions to FoI response deadlines have been introduced in Mexico, Italy and by some US agencies, GJIN reported. Delays were expected in Canada, Australia, Hong Kong, India and El Salvador.

However, New Zealand’s chief ombudsman, Peter Boshier, issued a statement arguing that freedom of information was now crucial. “Big decisions are being made in the wake of the global outbreak and public authorities must be in a position to respond to requests from the media and others for information about those issues as soon as possible,” he said.

TRAVEL: Free bus travel for under-22s to begin at end of January

END_OF_DOCUMENT_TOKEN_TO_BE_REPLACED

Ally Dawson made more than 300 appearances for Rangers Former Rangers and Scotland defender Ally Dawson has died aged 63 after a long illness, his

END_OF_DOCUMENT_TOKEN_TO_BE_REPLACED

By Peter Kearney Blairs Museum, Scotland’s National Catholic Museum has launched a brand-new website featuring an interactive virtual museum and shop, thanks to funding from

END_OF_DOCUMENT_TOKEN_TO_BE_REPLACED

By Bill Heaney Scottish Labour have raised concerns after research by the ONS showed Covid-19 rates continuing to rise in Scotland during July. The most

END_OF_DOCUMENT_TOKEN_TO_BE_REPLACED

DOWN MEMORY LANE: BETWEEN A ROCK AND A RIVER

Dumbarton Rock which stirs the hearts of exiles the world over. Picture by Tom Gardiner By MT Rainey It was near the top of my

END_OF_DOCUMENT_TOKEN_TO_BE_REPLACED

COVID: Moderate drinking is unlikely to impair your immune response … but heavy drinking might

Due your Covid jab? Mind what you drink afterwards By Anahad O’Connor Covid shots: ‘If you are truly a moderate drinker, then there’s no risk

END_OF_DOCUMENT_TOKEN_TO_BE_REPLACED

DROWNINGS: Man pulled from loch after six die in weekend of water tragedy

Picture above: Loch Lubnaig, near Loch Lomond, where a man was rescued from drowning. By Democrat reporter A man has been taken to hospital after

END_OF_DOCUMENT_TOKEN_TO_BE_REPLACED

By Billy Briggs in The Ferret July 25, 2021 Police Scotland and the RSPCA are investigating after an animal welfare campaigner filmed lice infested salmon