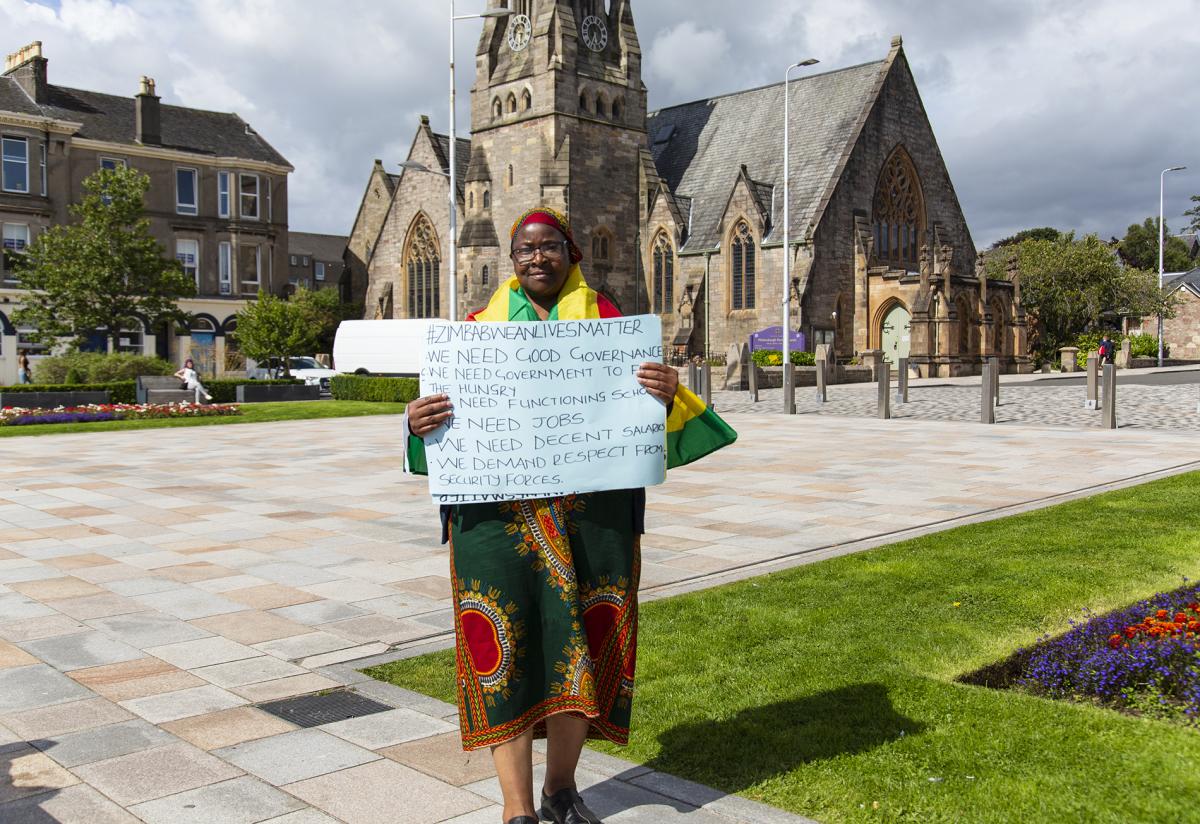 The Helensburgh Advertiser is reporting that an asylum seeker who has made her home in the town has spoken about her agonising wait to see whether she’ll be allowed to stay in the UK.

Harriet Ndlovu fled human rights abuses in Zimbabwe in 2007 and travelled to the UK before moving to Helensburgh in 2012.

Her case is being supported by the town’s MP, Brendan O’Hara, pictured right, who says Harriet’s life would be in danger if she was forced to return to Zimbabwe.

Mr O’Hara lent his backing to a small protest in Colquhoun Square last Saturday, August 22 in support of Zimbabwean Lives Matter, a campaign to raise awareness of human rights violations by the country’s government.

Harriet said she was still so shaken by the horrors she experienced in Zimbabwe that she was unable to describe them to the Advertiser.

She said: “I got help from Positive Action in Housing, a non-profit, refugee and migrant homelessness charity based in Glasgow who helps find housing for those in desperate need.

“Thanks to them, I lived with volunteers over three years before finally being left homeless and making my way to Helensburgh where I now live with a caring family.

“I love Helensburgh. The people are so nice and supportive, the sea is something that I didn’t know because Zimbabwe is inland. It is just beautiful here and everyone is so friendly.”

Harriet was nominated as one of the Advertiser’s ‘Lockdown Heroes’ in June after she spent the early weeks of the pandemic making protective face masks for health workers and members of the public.

Harriet continued: “In Zimbabwe, there is no rule of law, and human rights are violated by the ruling party and the government. Corruption is too high, and inflation is more than 800 per cent.

“There is no freedom in Zimbabwe. The only people enjoying freedom are the government and its officials and their families. Ordinary citizens are so poor that they can’t even afford to look after their families.

“There is a serious water crisis, there is no electricity in most parts of Zimbabwe, and the hospitals are in the worst conditions, that out of 10 infants, only one survives. There is no medication or working equipment in hospitals.”
Mr O’Hara said: “Harriet has made Helensburgh her home and is a well-respected and much valued member of the community. I have made it clear to the Home Office that Harriet should be allowed to stay.

“Harriet should be granted political asylum and allowed to live here without fear of being sent back to a country where her life would be in danger. It’s time the Tory Government stopped playing with people’s futures and treated refugees and asylum seekers as people.”

A Home Office spokesperson said: “Ms Ndlovu made several asylum claims, all of which were carefully considered and rejected in line with the immigration rules both by the Home Office and the courts.

“In January a judge ruled against Ms Ndlovu’s claim and concluded that they did ‘not accept that the appellant would be at risk on return’.”

FANCY A BITE TO EAT? GET YOURSELF DOWN TO BEN VIEW

Ben View:  Looking forward to Thursday when we team at Ben View in Strathleven Place, Dumbarton (next to the church) up with Blue Triangle and

END_OF_DOCUMENT_TOKEN_TO_BE_REPLACED

BOOKS: Culture That Made Me

John Banville on Joyce, The Sopranos, and the Catechism John Banville, 76, grew up in Wexford. He is arguably Ireland’s greatest living writer. In 1969,

END_OF_DOCUMENT_TOKEN_TO_BE_REPLACED

TEACHERS’ STRIKE: All secondary schools will close amid strikes

END_OF_DOCUMENT_TOKEN_TO_BE_REPLACED

Annual Battle of the Boyne celebration reportedly saw about 7,500 marchers taking part on July 2 By Bill Heaney Police had to devote more than

END_OF_DOCUMENT_TOKEN_TO_BE_REPLACED

RELIGION: We don’t seem to be able to find the time anywhere

CANON GERRY CONROY There is, I think, in life a great temptation to live simply day to day without thought for tomorrow. There is a

END_OF_DOCUMENT_TOKEN_TO_BE_REPLACED

LIBDEM Liam McArthur: Chance of dying in prison has doubled since 2008