When reporting on naval procurement related topics, we frequently encounter myths regarding shipbuilding in Scotland, ranging from claims on one side that all of the orders were cancelled to claims on the other that a ‘Frigate Factory’ has been built on the Clyde.

Below are most of our most-encountered myths and the reality behind them. Despite being numbered, they are in no particular order.

At 5,700 tonnes no one could realistically accuse the Type 31e Frigate of being a “mini frigate”, an MP decided to do so a couple of years ago however and as a result he has spawned a myth that doesn’t seem to go away.

The below image shows the Type 23 Frigate (the vessel type being replaced) followed by Type 31, Type 26 and for reference, a Type 45 Destroyer. 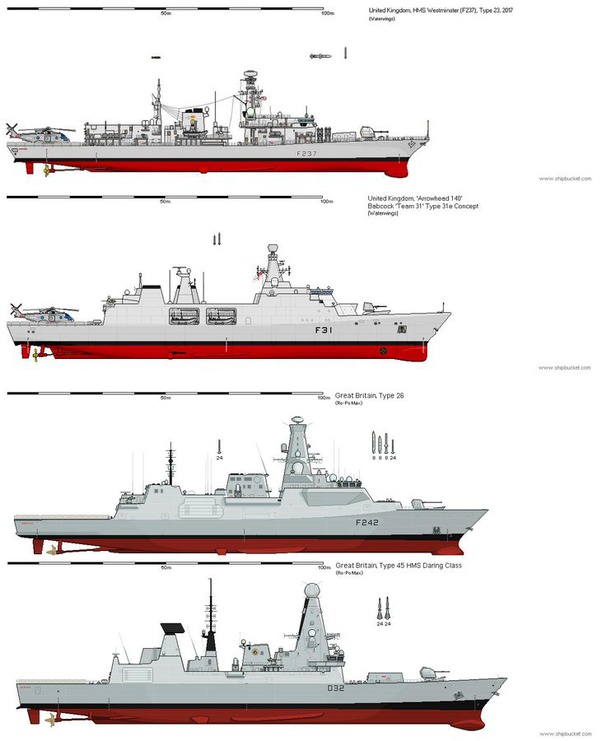 The reality is that 26 is the ‘Type’ of ship, not the number to be built. There are plans for 8 Type 26 Frigates and 5 Type 31 frigates to be built in Scotland.

This crops up constantly, almost daily in fact.

Myth 3 – ‘Scotland gets the scraps off the table!’

Scottish yards are building the entirety of the the frigate fleet and the Offshore Patrol Vessel fleet, more than anywhere else in the UK.

Myth 4 – ‘Scotland was betrayed when work on the tankers went overseas!’

Before the referendum, many were accused of exaggerating how secure the shipbuilding industry would be after independence. This came about due to comments made by Geoff Searle, director of the Type 26 Global Combat programme indicating that they had no back–up plan to the Clyde if a ‘Yes’ vote was returned. However, the Ministry of Defence, the shipbuilding union and BAE themselves all claim that major warship builds would be reconsidered if Scotland left the UK. Many in industry rejected this interpretation, advocating the position that no alternative plan did not rule out the possibility of the UK Government rethinking investment in the Clyde in the event of independence, something which was later confirmed by ministers.

“The Government is not making contingency plans because we are confident that the Scottish people will vote to remain part of the UK. No Royal Navy warships have been built outside the UK since the Second World War for national security reasons and we have no intention of doing so in future.”

Many have also misconstrued the building of naval tankers in South Korea for the RFA as a break in this policy, that is not the case. Support vessels like this were (at the time) eligible to be constructed outside the UK as only ‘complex warship’ construction (such as frigates) must stay within UK borders.

Besides, no Scottish yard actually bid for the work.

“I can help with that one, and probably others. No UK yards actually bid on the oilers. About 1 month before contract award an It/UK combo put forward a non-binding proposal. It was multiple times the cost of the contract awarded.”

This outrage also happened when the announcement that the new support vessels were going to international tender (although it has since been learned that the plan now is for a UK build). You can read more about that in the link below.

Myth 5 – ‘The Type 26 Frigate programme has been cut to three ships!’

Warships of this size and complexity are ordered in batches, British complex warships are typically ordered in batches of 3 to 5 vessels, allowing for incremental changes to a design as a result of lessons learned in build.

The Type 45 Destroyer was ordered in batches, why should the Type 26 Frigate be any different?

As we predicted before the announcement that the first batch of Type 26 Frigates were to be ordered, some groups have taken the batch build process to indicate a cut.

We covered this topic a few years ago.

Ordering in batches is common for projects of this size around the world and was last seen with the Royal Navy for the Type 45 Destroyers and recent Offshore Patrol Vessels. The Type 45s first batch order was for three vessels just like Type 26, the remaining five Type 26 Frigates are currently in negotiation.

This is normal and it is routine, more on this can be read in the next section.

Myth 6 – ‘Orders were quickly cancelled after the independence referendum’

One key issue that has had significant influence over the often torrid debate when it comes to military shipbuilding in Scotland is the reduction of the Type 26 procurement from thirteen to eight vessels. The often passionate arguments from those who support and oppose Scottish independence makes a balanced view of military ship building in Scotland and its future difficult as it can often end up with people shouting their ‘prefered’ facts at each other over social media rather then examining the issues.

With the change from 13 Type 26 Frigates to 8 Type 26 Frigates and 5 Type 31 Frigates (plus some Offshore Patrol vessels), there was the perception in some corners that work had been cut for Scotland, what actually happened?

As a result of Type 26 being reduced to 8 ships, it was announced that five general purpose frigates were to be designed and ordered. These became the the Type 31 Frigates and they were ordered from Babcock at Rosyth. Part of the reason for this change was understood to be that the MoD is hoping to reduce its reliance on BAE and cut the costs of procurement.

There are plans for 8 Type 26 Frigates and 5 Type 31 frigates to be built in Scotland, 5 River class Offshore Patrol Vessels have been launched. The original plan was for 13 Type 26 Frigates at one yard, years later the plan is now 18 vessels of three types sustaining work at three yards.

Jonathan Chartier, a defence commentator working in Government and local government IT services, explains the issue.

“Traditionally the Royal Navy has purchased ship classes from multiple yards and in distinct batches, this not only spreads programme costs but also allows for changes and improvements to the base design plus rectification work as well as keep shipyards open with a constant steady stream of work. Certainly for famous classes like the Type 12I Leander this batch production was necessary just to keep up with the radical changes seen in electronics and systems over their extensive career.

So whilst the Royal Navy would have a projected number to be built it was not unusual for the number of batches to be reduced or on some occasion increased as needed without comment by the wider general public to satisfy the requirements of the Admiralty and always lurking in the background Treasury. This practice continued through to the Type 23 class which was built by competing yards Marconi Marine (YSL), Scotstoun and Swan Hunter, Wallsend. It is actually possible to tell where an individual Type 23 was built by inspecting its internal pipe fittings. With warship construction consolidated on the Clyde Type 26 was projected to be a build of thirteen vessels again through multiple batches in keeping with common practice, for those familiar with military ship building the thirteen projected was at best a placeholder subject to change.

Certainly it was well known in the period after the 2010 Strategic Defence and Security review it was clear that the equipment programme was again coming under extreme financial pressure again. In that circumstance it was unfortunate with a Scottish Independence referendum in the running David Cameron and the Better Together campaign unwisely turned routine procurement that could be subject to change into a political football by making it a direct promise to Scotland; thirteen Type 26 Frigates would be built on the Clyde alongside a new ‘Frigate Factory’.

The Labour Party exacerbated the situation with a leaflet spelling out that if Scotland remained in the Union it would get 13 Type 26 frigates. The Prime Minister and other Ministers plus representatives of the Better Together Campaign regularly spelled out that a Scotland in the Union would be getting thirteen Type 26.”

So when the referendum was over and won for Better Together, the reality that Thirteen Type 26 was not deliverable within the allocated budget set in.

“A few months after cast iron guarantees for thirteen Type 26, the order was cut to eight as part of the 2015 Strategic Defence and Security with a compensatory order for five General Purpose frigates proffered and some Offshore Patrol vessels ordered in their place. Considering what was promised in very clear terms by the Prime Minister, Better Together and other Parties including Labour it is understandable why Scottish Nationalists have fixated on it as a totemic issue. Put simply thirteen Type 26 was a core promise by Better Together in the Independence campaign that has been, technically, broken.

Of course the more nuanced point to be considered is that Scotland gained five River class Batch II Offshore Patrol Vessels and five Type 31 Frigates (plus a ‘frigate factory’ in Rosyth) as compensation for the loss.”

You can read more on this from Jonathan Chartier by following the link below.

Myth 7 – ‘A frigate factory was built on the Clyde’

Former Defence Secretary Michael Fallon incorrectly claimed that a ‘frigate factory’ has been built on the Clyde more than two years after its construction was cancelled.

BAE Systems had been expecting to build 13 Type 26 Frigates and had even demolished sheds at its old Scotstoun yard to make away for the new covered build hall however the slashed its order for the Type 26 Frigate to 8 and BAE Systems decided to build the vessels across two yards, Govan and Scotstoun, rather than at Scotstoun.

A ‘Frigate Factory’ did however end up being built, just not on the Clyde but at Rosyth for the Type 31 Frigate programme instead.

The five Type 31 Frigates on order are being built at Rosyth in Scotland.

The article from Plymouth Live, while having a bit of a “clickbaity” headline according to some commentators, does go on to explain that the news relates to some components of the ship.

We covered this news in a less exciting way here, essentially, Thales as part of Babcock Team 31, has been selected to be the mission systems integrator for the Type 31 programme, delivering the combat system, communications systems and the navigation and bridge systems.

According to Thales, the work will be done in the UK.

Have we missed anything?

This list isn’t comprehensive so if we’ve missed anything, just let us know below!

By Bill Heaney Devolved or not, Scotland looks unlikely to have its own public inquiry into the Scottish Government’s response to the covid-19 outbreak. The

END_OF_DOCUMENT_TOKEN_TO_BE_REPLACED

SPORT: SCOTLAND WERE MISLED INTO THINKING THEY COULD WIN

Calum McGregor celebrates scoring Scotland’s goal in the Euro match against Croatia at Hampden. John McGinn and Kieran Tierney are on their way to congratulate

END_OF_DOCUMENT_TOKEN_TO_BE_REPLACED

By Lucy Ashton  LGBT Rainbow Flags have been raised at both the Faslane base and Royal Naval Armament Depot (RNAD) Coulport to mark Pride Week.

END_OF_DOCUMENT_TOKEN_TO_BE_REPLACED

By Lucy Ashton The family of an Alexandria lorry driver killed by a drinks driver has received more than half-a-million pounds in damages. Malcolm Easton,

END_OF_DOCUMENT_TOKEN_TO_BE_REPLACED

ENTERTAINMENT: Gillian Anderson hints at fourth season of ‘The Fall’