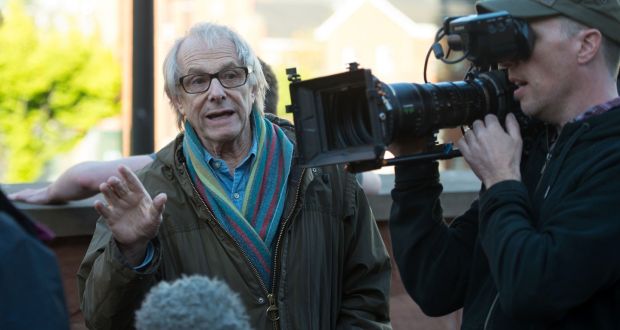 The director who has spent 50 years poking the establishment on Brexit, right-wing broadcasters and the gig economy

By Donald Clarke of the Irish Times

We can safely assume that Ken Loach wouldn’t like to be thought of as any sort of institution. For more than 50 years, he’s been poking the British establishment with a knobbly stick and reminding it of its outrages and inadequacies. Cathy Come Home, his TV drama on homelessness, has lost not an ounce of its power since its first broadcast in 1966. Just three years ago, he won his second Palme d’Or at Cannes (the first went to The Wind That Shakes the Barley) for a film that resonated just as strongly with audiences: the grim, gripping I, Daniel Blake.

His job is making life awkward for those in power. And yet. It’s hard to imagine England without him. The films are as part of the culture as real ale or rainy bank holidays. Familiarity dulls the attack not an iota. Sorry We Missed You, his latest, is ruthless on the iniquities of the “gig economy” and bogus self-employment. It will generate as much chatter as did I, Daniel Blake.

“A lot of people know that this is going on,” he says. “They have a sense it’s happening. It’s a secret everyone is keeping. When they see this they get a chance to acknowledge that secret. We all know there’s something not working in the way we allowed society to develop. It’s not right that we see so many people sleeping rough on the streets.”

Sorry We Missed You offers grim news from the frontline. Kris Hitchin plays a struggling dad who, still fighting to recover from the 2008 crash, invests in a new van and acquires a “franchise” as a delivery driver. He soon realises that the new arrangements allow new forms of exploitation. His children fret. His wife struggles to hold the family together. Paul Laverty, who has been writing for Loach since Carla’s Song in 1996, looks to have researched furiously.

“Paul is like a terrier,” Loach says. “He began as a lawyer and he won’t include anything that’s not verifiable truth. There have been cases where people have died through missing hospital appointments. Don Lane, just 53, died because he felt he couldn’t afford to go to an appointment and miss his work. He died as a result! The way Paul pitched the story was: ‘This is not unusual. This happens.’”

I assume there have already been suggestions that the film exaggerates the iniquities.

“Oh, I quite welcome that,” he says. “Come with us and meet the drivers. One right-wing head-banger called Mark Littlewood said that it was all the bad things in one family. He should meet the families we’ve met. Because far worse things happened.”

Loach’s gentle manner — his Warwickshire accent largely unaltered — does nothing to dull the force of his argument. Rather than bellowing, he will gnaw away at an argument with a polite determination that leaves little space for interjection. Raised in an ordinary West-Midlands home, he eventually found his way to Oxford to study law. A spell as an actor intervened before he found work as a director at the BBC. From this remove, it looks as if the corporation was going through a golden age in those years. The impression is that, while working on slots such as The Wednesday Play, Loach could make whatever the heck he liked.

“I think they were more innocent days,” he says. “Television was in its infancy. We had more freedom because they didn’t know the potential they had. Also, it was sexy to be on the left in the sixties in a way it hasn’t been since. It wasn’t any golden age, but it was a good time to be in broadcasting.”

In 1969, Loach directed a piece that many critics set beside unlikely bedfellows such as The Third Man and Lawrence of Arabia as a candidate for the best British film ever made. Kes, the story of a young boy and his kestrel, was a critical sensation, but, sadly, the subsequent collapse of the British film industry did for its director and many of his contemporaries. By the 1980s, UK film was back. Loach was not, however, invited to the party.

‘Thatcher closed down industry, made laws against unions and attacked the working class full on’

“The eighties were the worst time,” he says. “There was conscious effort on the part of those who controlled news and film to shift culture to the right. Channel 4 actually advertised for right-wing producers. They advertised for that!”

Was that not an attempt to counteract a perceived left-wing bias?

“It may have been,” he says. “But they banned four films I made for them. They wouldn’t show them. So much for the left-wing bias. That was 1983. They’d only opened and they were banning left-wing films. They weren’t left-wing at all. They were cunningly concealed right-wingers — as most broadcasters are.”

I wonder if Loach was trying and failing to get dramatic features made in these years. His contemporary Stephen Frears returned to cinema with My Beautiful Laundrette and Prick Up Your Ears. Mike Leigh was on the big screen with High Hopes. Was he consciously excluded?

“I was making documentaries then,” he says. “And I wanted to do that because the changes were so massive. Thatcher closed down industry, made laws against unions and attacked the working class full on. That was when the war was at its height. There wasn’t time to make a feature. I just wanted to get the documentaries out. Then they wouldn’t show them.”

Eventually producer David Puttnam, a driving force of the age, popped up and nudged Loach towards the film that became Hidden Agenda. Released in 1990, a study of the “shoot to kill” policy in Northern Ireland, the picture started a run of Loach projects that has continued unabated to the present day.

“A Tory MP called it the IRA entry at Cannes,” he laughs. “That probably helped. It got us some attention. That’s how we got back into the cinemas.”

It’s always “us” and “we” with Loach. The “us” and the “we” changes down through the years – currently including Irish cinematographer Robbie Ryan – but Loach will always spread the credit about.

“There is a continuous collective,” he agrees. “It began with writers and producers in the BBC. Now [producer] Rebecca O’Brien and Paul. A film is nothing if it’s not a collective. The idea of ‘a film by so-and-so’ is anathema to me. You couldn’t look the others in the eye. I’ve worked with Paul Laverty for a quarter of a century.”

‘I voted remain, but with a very heavy heart’

Loach has had a complex relationship with the Labour Party over the years. He first joined in the 1960s and remained as a critical force during the years of Neil Kinnock’s leadership. It came as no surprise when, after 30 years in the camp, he left the party during the Blair era. He dallied with the Respect Party and helped form the Left Unity alliance in 2013. Then his pal Jeremy Corbyn took the Labour ermine and Loach returned to his old political home. He has been a loyal supporter ever since. He reacted angrily to the recent Panorama programme alleging anti-Semitism within the party. “It bought the propaganda from people who were intent on destroying Corbyn,” he said. And so on.

“We are good friends,” Loach says. “It’s desperately important that Jeremy Corbyn gets elected. They will strengthen trade unions. They will end zero-hours contracts. They’ll invest in public service and neglected areas like where we made this film. The whole landscape is concerning the Labour Party as it concerns us. But we’re never the voice of a particular political position. You just try and tell the truth.”

Not everybody in Britain or Ireland has been content with Corbyn’s relaxed opposition to Brexit. His campaign in the referendum lacked energy. He refused to confirm if he’d campaign for “remain” in any second referendum.

This may all be so. But many Irish people are more concerned with the immediate threat of a breakdown in the political compromise allowed by EU membership on both sides of the border. This is a crisis right now.

“When it comes to Ireland – and I speak only for me – it has come time to right the historical wrong of 100 years ago,” he says. “The historic wrong of partition. It was divided at the command of people like Churchill to ensure that it stayed in the British Empire. We put in this crinkly border to maintain a majority for unionists. Ireland is one geographic unity. It is time to at least give people the chance to unite.”

But that’s not going to happen this month or next month. Brexit almost certainly will be with us before another spring.

“I see the threat,” he says. “But we need a longer historical perspective. What’s Britain doing owning part of Ireland? It’s been held at the point of a gun for most of those 100 years.”

Well, we aren’t going to solve any of these problems in the relatively short time allotted to our interview. We can have another go next time. If there is a next time. Journalists are always retiring Loach without asking his permission. Jimmy’s Hall, released in 2014, was rumoured to be his final film. So was I, Daniel Blake. Yet here we are. He’s 83 and seems uninterested in removing to the allotment.

“When you get older you take each game as it comes,” he says. “I’ll get this one launched and scratch around and have a think.”