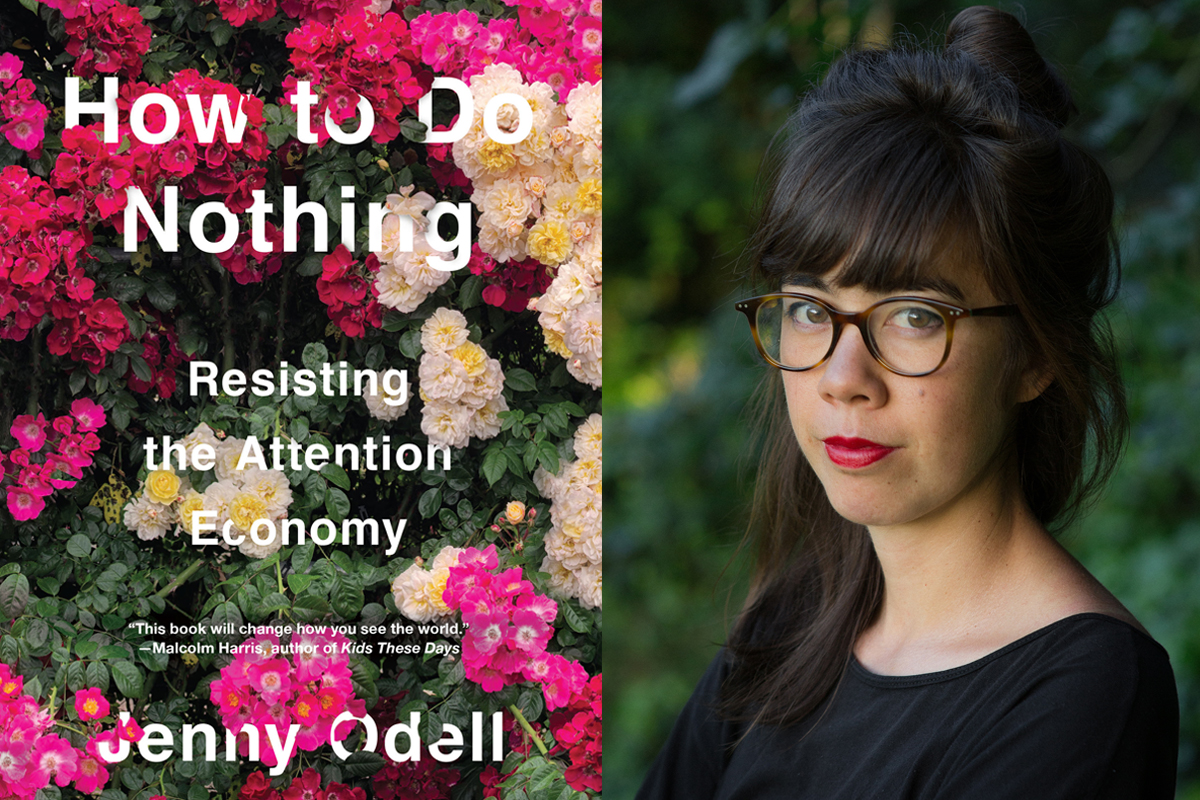 By her own admission, Jenny Odell’s book isn’t saying anything new, but the terms of reference are bang up to date for a new generation inured to personal branding, social monoculture, and the reification of the self: “It is within a blasted landscape of neoliberal determinism that this book seeks hidden springs of ambiguity and inefficiency.” What she goes on to prescribe as the solution to the multiple distractions competing for our mental energy approximates the concept, familiar in many Eastern religious practices, of being “in the zone”, or its more recent iteration of “flow”.

For Odell, a multidisciplinary artist, writer, and teacher, “doing nothing means disengaging from one framework (the attention economy) not only to give myself time to think, but to do something else in another framework”. All rather evocative of Why Don’t You Just Switch Off Your Television Set and Go Do Something Less Boring Instead, but the fact that digital distractions facing millennials and Generation Z are exponentially greater, and with exponentially higher stakes, than those faced by their predecessors, makes this book an important read: it is a call to arms against the attention economy for digital natives.

The book takes the form of six essays. “The Case for Nothing” begins with a personal crisis experienced by the writer in the aftermath of Trump’s election. Taking refuge in the Rose Garden in Oakland, California, she began work on an antidote to the rhetoric of growth, urging a protective stance towards ourselves, our spaces, our animality, and our interiority. While a knee-jerk reaction to the machinations behind the attention economy as described in the opening chapter might be to run away, Odell decides that the greater challenge is to stay in the midst of life, and figure out how to navigate it. “The Impossibility of Retreat” explores the history of the idea of the permanent retreat, from Diogenes to the communes of the 1960s. The story of the commune, she writes, “teaches me that there is no escaping the political fabric of the world”. It is more important, then, to engage in “a form of political refusal that retreats not in space, but in the mind”. “Anatomy of Refusal” considers ways in which this can be done. “Attention”, she suggests, “may be the last resource we have left to withdraw” – a concept which brings to mind Ilya Kaminsky’s recent poetry collection Deaf Republic and its exploration of the revolutionary capability of silence. Odell argues that “to pay attention to one thing is to resist paying attention to other things; it means constantly denying and thwarting provocations outside the sphere of one’s attention”. She notes that collective alignment, rather than individual retreat, creates a third space “of refusal, boycott, and sabotage – [which] can become a spectacle of noncompliance that registers on the larger scale of the public”. One thinks also of Greta Thunberg, and the thousands of schoolchildren staging sit-down protests outside their schools, demanding their future back. While their actions have certainly registered, whether they actually change anything remains to be seen.

The tenets of mindfulness are never far from view in this book, particularly in the emphasis on paying close attention. Such attention has been brought to bear on every aspect of the book’s production: it is end-noted, well-indexed, and the jacket image is of trusses of rose blossoms, a nice touch which evokes both Epicurus’s garden and the Rose Garden where the germ of the book took root. In “Exercises in Attention”, Odell draws on her own experience as an artist and art educator, examining what can be learnt from art history and vision studies to examine the relationship between attention and volition. This section, which for this reader is both the strongest and most original in the book, contains a key discussion of the debate between agency and structure when navigating the attention economy. Technology ethicists (how reassuring to know there is such a thing) argue for legal restrictions on addictive technology, but Odell is more in favour of training people’s attention. The problem with this is that it is largely dependent on social capital, and raises broader questions for educationalists, urban planners and whole political systems. There is no easy answer, because “the pitfalls of the attention economy can’t just be avoided by logging off and refusing the influence of persuasive design techniques; they also emerge at the intersection of issues of public space, environmental politics, class, and race”.

“Ecology of Strangers” takes the discussion into the area of bioregionalism and environmental literature, to argue “for a view of the self and of identity that is the opposite of the personal brand: an unstable, shapeshifting thing determined by interactions with others and with different kinds of places”. Ultimately, Odell aligns herself with environmental writers, concluding that a solution lies in observing natural cycles, working with nature, resisting the idea of “progress” and “growth” that have become so embedded in the human psyche, and replacing them with an appreciation of the old ways and indigenous stories which “animate the world [because they] are not only repositories of observations and analyses made over millennia, but also models of gratitude and stewardship”.

While it is hard to imagine a utopian social network which would respect the need for solitude, “Restoring the Grounds for Thought” stresses the importance of offline communities and resources, such as neighbourhood groups and public libraries, which in many communities it is still possible to access. Odell grew up “thinking that parks were somehow just ‘leftover’ spaces”. Much of her research is a discovery of contexts that previous generations took for granted – the existence of an interconnected world, both in terms of its physical spaces and its interpersonal – and interspecies – relationships.

Somewhat disappointingly, though not surprisingly, she pulls back from proposing a concrete solution to the problems she identifies, suggesting instead a re-evaluation of what constitutes progress. Well-written, well-researched, and unfailingly interesting, How to Do Nothing ultimately reads more like an artist’s journey to a more attentive way of living than a manifesto for broad social and political change.

This review first appeared in the Dublin Review of Books. Amanda Bell is a writer and editor based in Dublin. Her most recent publication is The Loneliness of the Sasquatch, a translation from the Irish of Gabriel Rosenstock, Alba Publishing. http://www.clearasabellwritingservices.ie

By Ian Murray The Society of Editors and Journalists’ Charity are among early supporters of a new scheme to help create paid fellowships to provide journalism experience during the Covid-19 crisis. Organised by Journo Resources, the scheme will enable future journalists who might normally have sought work placements or internships but have seen plans disrupted by […]

Death numbers down ten weeks in a row, says FM

One more person who tested positive has died in the last 24 hours, taking the total to 2,490 deaths in Scotland by that measure.

Next steps for people shielding

From 10 July those shielding will no longer need to physically distance from people they live with.

They are among 150 leading authors, academics and thinkers who signed a letter published yesterday that condemns “cancel culture” for stifling freedom of expression in higher education, journalism, philanthropy and the arts.

“It’s a concern if some hidden epidemic could occur after Covid where you’re going to see delayed effects on the brain,” Zandi says. “But it’s far too early for us to judge now. We hope, obviously, that that’s not going to happen, but when you’ve got such a big pandemic affecting such a vast proportion of the population it’s something we need to be alert to.”

ROYAL NAVY MINE HUNTER RETURNS TO SCOTLAND AFTER NATO DEPLOYMENT

Afterwards the NATO allies sailed to Kiel, Germany, to take part in NATO’s Exercise Baltops where they joined colleagues from Finland, Lithuania and The Netherlands.

A spokesperson for Unison Scotland said: “The current system has clearly failed. But having care homes being used to funnel public money to tax havens isn’t a case of market failure. The failure here is in having the market in the first place.