A Scottish Government programme envisaging trials for seaweed dredging around the coast of Scotland has re-awakened fears for the future of “precious” underwater kelp forests.

A work plan released by the government’s Marine Scotland says that “field trials” assessing the “sustainability of mechanical harvest of seaweed” are scheduled to begin in July 2020.

Campaigners have reacted with alarm, claiming that kelp – a kind of seaweed – is threatened with “environmental destruction”. Kelp is vital to help cut climate pollution, prevent coastal erosion and protect marine wildlife, they say.

The Scottish Government stresses that no dredging trials have been commissioned or planned – though it does not rule them out. Pilot studies would only be carried out after desk studies had been concluded, it says.

Following widespread protests, SNP ministers backed a ban on mechanical kelp dredging proposed by the Scottish Greens in November 2018. Marine Biopolymers, the Scottish company behind plans to harvest 30,000 tonnes of kelp off the west coast, warned this could stymie a £300 million industry.

The Scottish Government then set up a seaweed review group, chaired by Marine Scotland. Its aim is “to help ensure existing seaweed harvesting activity and future proposals are sustainable and Scotland’s marine environment is protected.”

But a “proposed forward work programme” posted online by the review group has sparked concerns that kelp dredging could start next year. Under the heading “sustainability of mechanical harvest of seaweed” it schedules “develop and commence field trials/pilot studies” to start in July 2020 and run through to the end of 2023.

Ailsa McLellan, an oyster farmer from Ullapool who campaigns against kelp dredging, was “staggered” that mechanical harvest field trials had been timetabled. She is worried that kelp dredging has not been ruled out.

“Any removal of the kelp habitat will reduce a marine carbon sink and will reduce the habitat that forms the bottom of the coastal marine food web and any species that rely on it, including commercially valuable fin and shellfish species,” she said.

“Kelp protects coasts from erosion, produces oxygen, and buffers the rising acidity of the sea. The kelp habitat is comparable to the rainforest with respect to the biodiversity that it hosts.”

McLellan added: “Given what we know about climate change and habitat destruction I find it inconceivable that any progressive political party would ever allow this new form of environmental destruction.”

She was backed by one of the world’s leading seaweed experts, Professor Juliet Brodie from the Natural History Museum. “Kelp forests are unique and precious habitats,” she told The Ferret.

“Mechanical removal of kelp from the seabed will remove this unique habitat. Where the habitat is gone there will be no nurseries for fish, no protection of our coasts and the world will be a poorer place,” she said.

“We need to wake up to the loss of these ecosystems before it is too late.”

Its a shame that the hard work put in by everyone to stop kelp dredging, plus massive objections from coastal communities is being overlooked with @marinescotland planning to start dredge trials in summer next year, Scotlands ‘Year of Coasts and Waters’ #nokelpdredge https://twitter.com/SaversSea/status/1202306429245362177 …

With @GailRossSNP at @NatureofScot #NatureOfScotland awards I’m Edinburgh. Our local MSP who has supported the Sea Savers a lot and helped shout #NoKelpDredge! 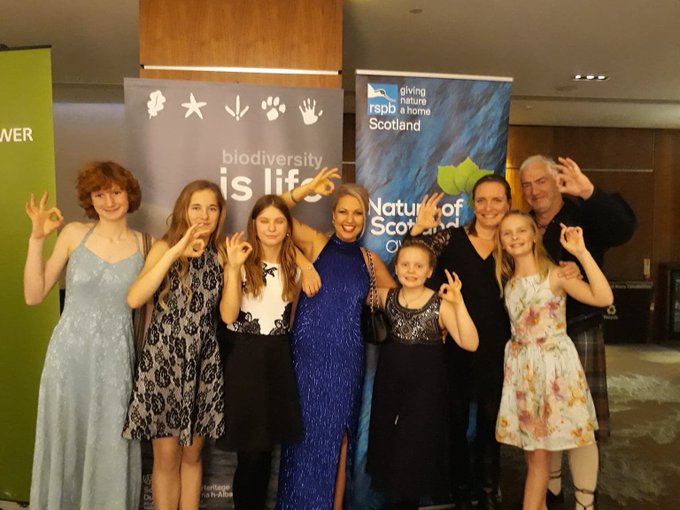 The campaign group, Open Seas, accused the Scottish Government of allowing asset stripping of the seas. “Kelp forests are a hugely important part of Scotland’s coastal ecosystem and yet these documents signal preparations for their industrial extraction,” said the group’s head of campaigns, Nick Underdown.

“What is going on in the Scottish cabinet and how do they think this is going to help respond to a climate emergency? Rather than short term growth at all costs, we should be investing in ways to recover and upgrade the health of our sea, not further degrade it.”

The Scottish Greens argued that ministers only agreed “through gritted teeth” to ban kelp dredging. “So it was no surprise that a working group was set up including the very company that had lobbied government to start dredging in the first place,” said the party’s environment spokesperson, Mark Ruskell MSP.

“There is room for a commercial kelp industry, but it should be about growing kelp not dredging it from the seabed. Ministers need to restore trust with communities, conservationists and the fishing sector that our kelp forests will be left alone.”

Sally Ann Campbell, a scientist on the board of the Scottish Creel Fishermen’s Federation and a member of the government’s seaweed review group, pointed out that kelp was an “emotive” issue. She stressed that no decision to conduct field trails had yet been taken.

The case for the commercial exploitation of kelp “raises a huge number of questions about the actual value of the raw material set against the much wider value of its contribution in place to biodiversity, ecosystem services, wave moderation, carbon sequestration and most vitally inshore sustainable fisheries and their communities,” she said.

“We are dealing here with gold dust,” she added. “Seaweed beds form the very basis of sheltered secure nurseries for many, if not most, of other marine organisms to nurture young whilst limiting predation.

“They are the productive factories enriching our wider inshore waters, the key to getting back our sustainable fishery nurseries, and supporting creeling and coastal communities in inshore waters. We need every means of feeding ourselves sustainably in the future as the world population requires ever more food resources.”

The Scottish Government did not reject the possibility of kelp dredging. “No mechanical dredging trials have been commissioned or are planned,” said a government spokesperson.

“The seaweed review group has agreed for the need for a desk study to consider what any appropriate pilot study approach could be. However, any pilot would only be developed once these desk studies have concluded and supplementary investigations, such as expert judgement and supporting modelling work, are carried out.”

Kelps are large brown seaweeds that grow on underwater rocks around Scotland’s coasts. Globally there are around 30 different types, thought to originate between five and 23 million years ago.

In 2014 the Scottish Government designated kelp beds as one of 81 “priority marine features” to try and give them better protection. That’s because they provide food and shelter for many marine animals, including commercially fished species.

According to the government’s wildlife agency, Scottish Natural Heritage (SNH), kelps have no roots. “Instead, they attach to rocks with tough, branched holdfasts,” the agency says.

“In place of true stems, kelps have stiff stipes, which hold them up towards the sunlight. Their palm-like fronds may be long and strap-shaped or split into several strap-like lobes, depending on the species.”

One type of Scottish kelp called cuvie forms dense underwater forests, where there is bedrock or large, stable boulders for attachment. It grows best where the water movement from waves or currents is strong.

“The sheltered forest floor beneath the kelp can support a variety of red seaweeds and animals including sea anemones, sea firs, sea squirts and sponges. Fish found near kelp forests include the two-spotted goby, wrasse, pollack and saithe.”

The sheltered nooks and crannies of kelp forests can be home to between 30 and 70 different species – and many hundreds of individual animals. “Kelp harvesting needs to be managed to ensure this can be undertaken sustainably,” cautions SNH.

“The scale, intensity and methods of harvesting should not result in long term damage to kelp beds.”

According to a briefing for the Scottish Parliament, kelps are harvested for chemicals known as alginates. They can be used for food production, pharmaceuticals, tooth paste, textiles, paper and biotechnology.

“Approximately 20 countries are involved in harvesting brown seaweeds, totalling over 620,000 tonnes per year. In Europe, commercial kelp harvesting is carried out in Norway and France, with some smaller scale harvesting in Ireland.”

This story was published in tandem with the Sunday National.

West Dunbartonshire’s Labour-controlled council leader Martin Rooney. By Lucy Ashton Dumbarton is gearing up to celebrate its 800th year as a Royal Burgh with a

END_OF_DOCUMENT_TOKEN_TO_BE_REPLACED

By Bill Heaney Road Policing officers are appealing for information following a fatal crash on the A83 Old Military Road, near Ardgartan. Around 6.05pm on

END_OF_DOCUMENT_TOKEN_TO_BE_REPLACED

Start Up Loans programme has supported more than 6,200 Scottish businesses with loans worth £54 million Start Up Loans of up to £25,000 now available

END_OF_DOCUMENT_TOKEN_TO_BE_REPLACED

Raw sewage washed up on Ganavan Sands, one of Scotland’s most popular beaches, at Oban in Argyll. Pictures by Bill Heaney Scottish Liberal Democrat leader