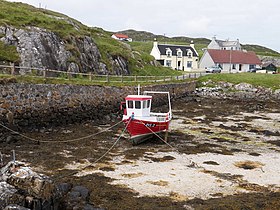 Shoreline view of the Isle of Barra

THERE were a record-breaking number of entries for this year’s Gaelic short film competition, FilmG, and they are all available now to watch online.

A massive 103 entries were submitted in total, including 23 films to the open category, 75 films made by young people aged five-18, and five scripts. The competition is now well-established in schools and with Gaelic speakers and filmmakers across the country.

Voting for The People’s Choice Award is open until the end of January.

Shortlists chosen by a panel of media professionals will be announced in January and their winners will be unveiled at the awards ceremony on 14 February 2020.

Each year, FilmG encourages aspiring filmmakers to show off their talent and creativity. This year, filmmakers were tasked with making films relating to the theme, ‘Treòraich’, which means guide or lead.

Eilidh Rankin, FilmG project manager, said: “It’s been a joy to go through this year’s entries. We are delighted to see numbers growing year on year – a sign that the competition is increasing in popularity.

“It’s also really exciting to see such a breadth of topics and genres being covered, and the overall quality of the films is so high.

“It’s great to see familiar faces returning to our screens, as well as new talent coming to the fore.”

Project funders, MG ALBA, were also delighted at the standard of entries, and communications manager, Murdo MacSween, said: “It’s great that FilmG continues to grow and it’s really inspiring to see funny, dramatic, fascinating content made in Gaelic with such enthusiasm!

“FilmG is a fantastic route to get noticed and to lay a marker for the future and as an industry it’s encouraging to see so many come through FilmG to a career in Gaelic media.”

His documentary film, Aig an Oir (The Edge), follows Lochalsh-born climber Kenny Rankin as he takes on a renowned route in Ayrshire, and ex-pupil of Greenfaulds High School in Cumbernauld, filmmaking student Tommy Hammond’s documentary film, celebrates the work of two influential Gaelic teachers in his old school.

Primary schools in the area showed an interest as well, with Condorrat in Cumbernauld and Mount Cameron (East Kilbride) primaries taking part and Bun-sgoil Ghàidhlig Ghleann Dail on Glasgow’s South Side who have had a film club running in order to make their film An Coidse (The Coach).

Edinburgh entrants have also been creative across the youth and open categories, with Queen Margaret University student, Cara Turner, exploring a world where guidance on all of life’s issues comes at the touch of a button in her drama film, EFFY.

While Napier student Joseph Flower’s film Sgiùradh (Scrubbing), follows a washing woman who has secret powers, as she quietly solves problems for her neighbours.

Pupils at James Gillespie’s High School, also in Edinburgh, made a film as part of the FilmG Workshops process, and two independent entries including a comedy based at a tea-making championship.

In the Highlands and Islands, comedy was popular this year. Kilmuir Drama Club in north Skye adapted a stage play for screen in Bùth nan Èisg (The Fish Market) which follows a cheekily-named proprietor, and a variety of weird and wonderful staff and customers as they go about their business.

Advanced Higher S2 pupils at Stornoway’s Nicolson Institute made a film called Holiday Inn-tinneach which sees holidaymakers arrive at Lewis’ answer to Fawlty Towers, while Gaelic learners in Culloden Academy in Inverness made a film about an old man who comes up with an innovative solution to a shortage of black pudding.

Some of the high schools have taken a supernatural or historical slant on the theme, including Ardnamurchan High School (near Fort William) where fluent speakers made a sci-fi film Reòite! (Frozen) which sees science whizz John invent a machine that can stop time, only for it to land in the wrong hands.

Dingwall Academy, Inverness, created a drama film with influential characters from Scotland’s past while Citadel High School in Halifax, Nova Scotia in Canada, took part for the first time with a film based on a traditional Cape Breton tale.

The newly-introduced award for Best Documentary in the youth category has been popular too.

Fluent speakers at Castlebay High School, Isle of Barra,  made a film Tìr a’ Gheallaidh (Land of Promise) which tells the little-known story of the Annie Jane, a ship which was wrecked off the coast of Vatersay in 1853 with 450 passengers, mostly emigrants, on board.

Independent filmmakers have explored a variety of topics within the documentary genre, as well as making drama, comedy, and animation-based films.

CONCERT: ‘Doddie’s Dream’ will raise funds for the My Name’5 Doddie Foundation

END_OF_DOCUMENT_TOKEN_TO_BE_REPLACED

Available in all good bookshops and online. Andrew O’Hagan with his friend, Edna O’Brien, at the Edinburgh Book Festival. Picture by Bill Heaney The Booker

END_OF_DOCUMENT_TOKEN_TO_BE_REPLACED

Tory interim leader Baroness Ruth Davidson, who is deputising at Holyrood until May for Douglas Ross MP, who will take over after the Scottish Parliament

END_OF_DOCUMENT_TOKEN_TO_BE_REPLACED

By First Minister Nicola Sturgeon Yesterday, 500 new cases were reported, which was 2.5 per cent of all the tests that were carried out. The

END_OF_DOCUMENT_TOKEN_TO_BE_REPLACED

Carmichael welcomes end to US tariffs on Scottish whisky

By Rory Murphy MP Alistair Carmichael, has welcomed news that the United States will end retaliatory tariffs imposed on Scottish whisky, which have cost the

END_OF_DOCUMENT_TOKEN_TO_BE_REPLACED

Thor ready for his Great British Shave Off

Thomas Ellis, the reason behind his lengthy beard and long locks is not to look like a Glaswegian version of Thor, but to raise charity