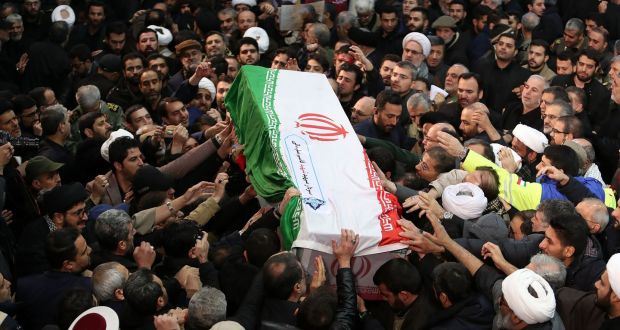 Emotional scenes at the funeral of Iranian general Qassem Suleimani.

Iran has announced that its military “unintentionally” shot down the Ukrainian aircraft that crashed earlier this week, killing all 176 aboard.

The Iranian government had previously repeatedly denied Western accusations that it was responsible.

The plane was shot down early on Wednesday, hours after Iran launched a ballistic missile attack on two military bases housing US troops in Iraq in retaliation for the killing of Iranian general Qassem Suleimani in an American airstrike in Baghdad. No-one was wounded in the attack on the bases.

A military statement carried by state media said the plane was mistaken for a “hostile target” after it turned towards a “sensitive military centre” of the Revolutionary Guard.

The military was at its “highest level of readiness,” it said, amid the heightened tensions with the US.

“In such a condition, because of human error and in an unintentional way, the flight was hit,” the military said. It apologised and said it would upgrade its systems to prevent future tragedies.

It also said those responsible for the strike on the plane would be prosecuted.

Iran’s acknowledgement of responsibility for the crash was likely to inflame public sentiment against authorities after Iranians had rallied around their leaders after Suleimani’s killing.

The general was seen as a national icon, and hundreds of thousands of people had turned out for funeral processions across the country.

But the majority of the plane crash victims were Iranians or Iranian-Canadians, and the crash came just weeks after authorities quashed nationwide protests ignited by a rise in petrol prices.

Iran’s president Hassan Rouhani blamed the tragedy on “threats and bullying” by the US after the killing of Suleimani.

He expressed condolences to families of the victims, and he called for a “full investigation” and the prosecution of those responsible.

“A sad day,” Iran’s foreign minister Mohammad Javad Zarif tweeted. “Human error at time of crisis caused by US adventurism led to disaster. Our profound regrets, apologies and condolences to our people, to the families of all victims, and to other affected nations.”

Iran had denied for several days that a missile caused the crash. But then the US and Canada, citing intelligence, said they believed Iran shot down the aircraft with a surface-to-air missile, a conclusion supported by videos of the incident.

The plane, heading to the Ukrainian capital of Kyiv, was carrying 167 passengers and nine crew members from several countries, including 82 Iranians, 57 Canadians and 11 Ukrainians, according to officials. The Canadian government had earlier lowered the nation’s death toll from 63.

“This is the right step for the Iranian government to admit responsibility, and it gives people a step toward closure with this admission,” said Payman Parseyan, a prominent Iranian-Canadian in western Canada who lost a number of friends in the crash.

“I think the investigation would have disclosed it whether they admitted it or not. This will give them an opportunity to save face.” – PA

SCHOOLS MUST BE CLEAN AND SAFE FOR GOING BACK

Jim Halfpenny, of the West Dunbartonshire EIS branch, said: “Extensive and regular cleaning of schools will be absolutely crucial for the health and safety of pupils and staff.

ROAD CLOSURE BETWEEN BOWLING AND OK ON A82

Brendan O’Sullivan, Scotland TranServ’s area manager, said: “The A82 is an essential route connecting Glasgow and the Central Belt with Dumbarton, Loch Lomond and the North. As such it is used by emergency services, freight, retail and delivery traffic as part of their essential working.

PROSTATE SURGERY IS BACK UP AND RUNNING

He said: “I was nervous like other people who have cancer on what the delay meant. But going into hospital, my mind was taken off the COVID situation. Everyone from the support staff right through to the nursing team and surgeon made me feel safe and never felt at risk.”

Many of the violent incidents are triggered by refusal of sale when a customer cannot prove their age when purchasing age-restricted products like alcohol or tobacco.

PROFESSOR FOUND SINGING TO BE ‘QUITE SAFE’

Some believe singing isn’t the problem – but rather, the close contact. Fluid mechanics expert, Professor Christian Kähler, of the American Military University, conducted a study of droplet spread at concerts and found singing to be “quite safe”.

The Leader of Argyll and Bute Council, Councillor Aileen Morton, said: “We are committed to creating a sustainable future for Argyll and Bute and we are working hard to deliver the Climate Change (Scotland) Act and enhance the area’s contribution to addressing this global issue.

PROGRESS BUT NO CAUSE TO CELEBRATE JUST YET

The first minister told the media briefing in St Andrew’s House that the total number of deaths from last week from all causes, not just from Covid, was 20 below the five-year average.