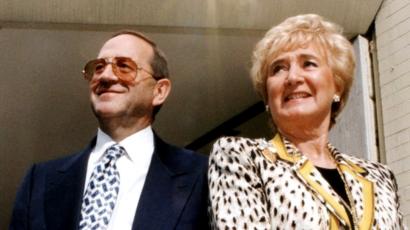 Gerald Weisfeld and his wife Vera were one of the UK’s richest families when they sold the popular department chain.

The founder of the What Every Woman Wants department store has died at the age of 79 after suffering from Alzheimer’s disease.

Gerald Weisfeld died on Sunday at the Summerlee House care home in Lanarkshire.

He founded the popular store with his wife Vera in Glasgow in 1971, before expanding across the UK.

The first of its buildings, which was B-listed, was demolished in November after lying empty for 16 years.

What Every Woman Wants rose from the single store in Glasgow’s Argyle Street to become a landmark of the UK high street in the 1970s and 80s.

Stores sprung up in towns such as Irvine, Blackburn, Hartlepool, Ormskirk, Leyland and Swansea as well as one on the Isles of Man.

Staff would sing the company song as they opened up each morning and TV adverts were recorded to the tune of Status Quo’s hit “Whatever You Want”.

Billy Connolly turned up in a horse and cart to declare The Argyle Street store open.

The Weisfelds sold the business in 1990 for £50m, believed to be the highest amount ever paid for a Scottish fashion house.

Mr Weisfeld, who was born in London, donated £10m to be used for charitable causes at home and abroad and funded an emergency welfare mission to the former Yugoslavia in 1994, taking food by convoy and setting up a kitchen for refugees in war-torn Bosnia.

He also helped to establish children’s homes in Romania, offering refuge to children rejected by society because they were suffering from Aids.

He was also known to pay for medical treatment for members of staff or their families. Mr Weisfeld believed he would get the best out of his workers if they did not have personal problems.

He also founded a chair of peace at Tel Aviv University and made financial contributions to a number of universities in Scotland.

He died on Sunday night, after a lengthy battle with Alzheimer’s disease.

His wife Vera said: “My family’s hearts have been broken over the last eight years, witnessing Mr Weisfeld’s mind and body being taken over completely by this cruel and wicked disease. For all his abilities, he could do nothing to prevent it.”

She added: “I would like to thank the care home staff who looked after him so well.”