Why Annecy is the best town to live in France

And the overall winner was Annecy, the beautiful little town nestling by Lake Annecy at the foot of the mountains in Haut Savoie.

The lake is popular with locals and tourists alike and offers a host of watersports. Photo: AFP

Popular as a tourist destination in both summer and winter and with second home owners, the town is also a favourite among frontaliers who live in France and work in Switzerland, as it is just a 40 minute drive to Geneva.

In fact of the people of working age who live in Annecy – 11 percent of them work in Switzerland.

This gives the town a low unemployment rate (6.2 percent) while Swiss workers, who tend to be on higher pay, find prices affordable.

The flip side of this is that prices, especially for property, are rising in the town.

But locals are still enthusiastic about its picture postcard charm and and good levels of services.

The survey, done by opinion pollsters OpinionWay, took data from Insee in 182 official criteria to create the list.

Towns were ranked in numbers according their size, then the overall winner of all categories as chosen.

Of the smaller communes Rodez, Biarritz, Lannion and Le-Puy-en-Valey came out top while the best village with less than 500 inhabitants was Mey, on the German border.

“There is no element declaring the feelings of the inhabitants,” researcher Thierry Saussez, told the Journal du Dimanche, which published the results.

“We have chosen to use 100 percent quantitative and objective data, the only way to make comparisons. Thus, the economic policies of local elected officials or hyper-local initiatives are not taken into account.” 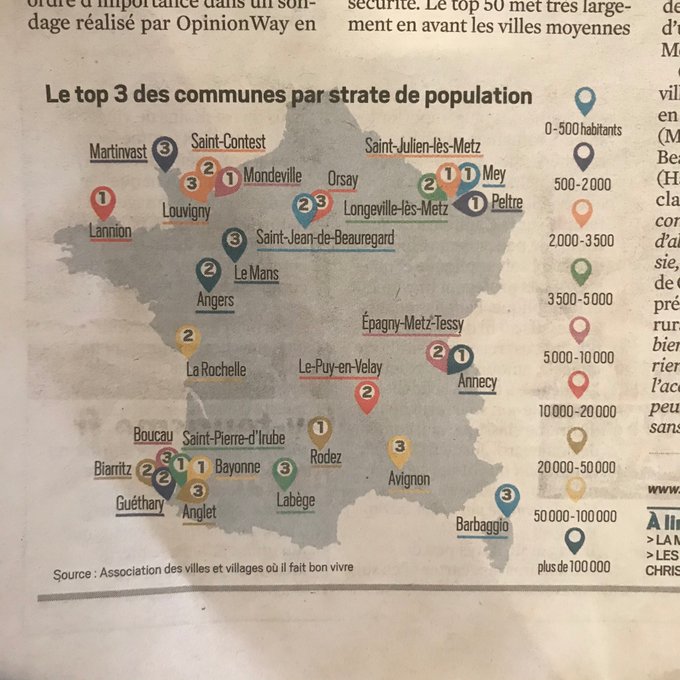 31 people are talking about this

Best of the rest