Murder investigation expected to begin after bodies found in Newcastle 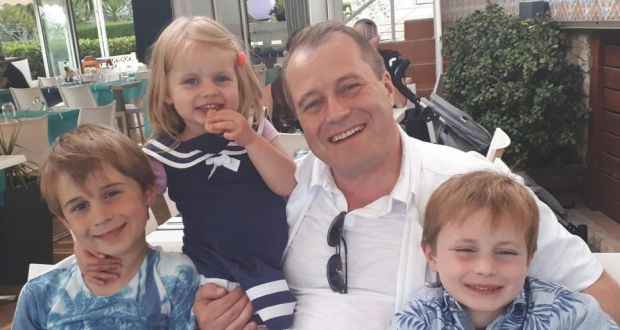 Conor (9), Carla (3) and Darragh McGinley (7) with their father Andrew McGinley. The children were found dead in a house in Co Dublin on Friday night. Handout photograph: Andrew McGinley/An Garda

The three young children whose bodies were discovered in a Co Dublin house on Friday evening have been named.

Gardaí are expected to begin a triple murder investigation as early as Saturday following the discovery of the bodies at Parson’s Court, Newcastle, just after 7pm on Friday.

The children were named by gardaí on Saturday as Conor (9), Darragh (7) and Carla McGinley (3).

A woman, believed to be the children’s mother, is being treated in hospital after she was found in a distressed and disorientated state outside the property.

It is understood the children’s father Andrew was not at the house at the time.

The deaths of the children are being treated by the gardaí as “sudden” and “unexplained” and the inquiry into their deaths is criminal in nature.

One strong line of investigation was that the children met with foul play, though early indications are they had no obvious injuries on their bodies. Gardaí were hoping to speak to the woman, who is in her 40s, as early as Saturday.

She was being treated at Tallaght Hospital, Dublin, and gardaí believe she has information about what happened.

When gardaí and paramedics arrived at the scene just after 7pm the children were pronounced dead inside the house. It was unclear how long they had been dead.

Gardaí believe the children were living with their mother at the property, in a private estate of houses and apartments.

The scene was sealed off by gardaí and the bodies of the children remained in situ overnight pending the arrival of a pathologist this morning from the State Pathologists Office.

The bodies were removed from the scene on Saturday morning.

A pathologist carried out a preliminary examination of the bodies at the scene before their removal for a full postmortem.

The same sources said all the resources of a homicide investigation had been committed to the case.

As well as a pathologist due to the property early on Saturday morning, the Garda Technical Bureau was also set to examine the property. That examination was expected to continue through the weekend.

By Saturday afternoon, several bunches of flowers had been placed at the house. Locals described the area as “nice and quiet”.

Austin Cooney, who lives on the next road, said: “I was born and reared here and I’ve never seen anything like this. It’s desperate, three small children . . . it’s not pleasant to hear something like this anywhere.”

A woman who did not want to be named said she was “ devastated”.

“Devastated is the only word I can think of. The shock of it, three small children,” she said.

Tusla on Saturday said it would put in place necessary supports as part of a critical incident protocol developed by the South Dublin Children and Young People’s Service Committee. The protocol is activated following serious incidents likely to impact a community, it said.