Deirdre Morley, who was on stress-related leave from her job, held on suspicion of murder 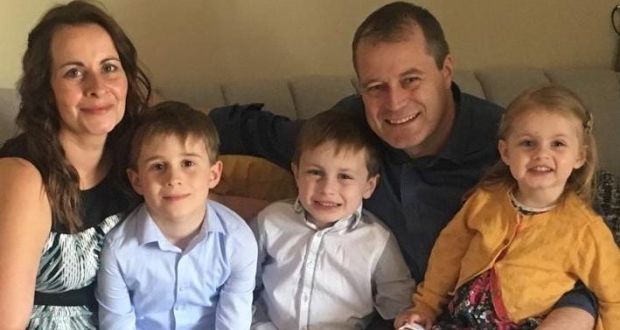 A family photograph of Andrew McGinley and Deirdre Morley and their children; Conor (9), Darragh (7) and Carla (3). The children were found dead at their home on Friday. Photograph: via An Garda

By Conor Lally in the Irish Times

Gardaí  [Irish Police] have extended the period of detention of the mother of the three McGinley children found dead in Newcastle, Co Dublin, last week.

Deirdre Morley was arrested on Tuesday evening and taken to Clondalkin Garda station on Tuesday night where she remained overnight.

Her period of detention, under Section 4 of the Criminal Justice Act, has been extended by a Garda superintendent after the initial allowed period of six hours expired.

The bodies of Conor (9), Darragh (7) and Carla (3) McGinley were discovered in their home at Parson’s Court in Newcastle just before 8pm on Friday.

Their mother was found by a taxi driver in a disorientated condition near her house shortly before the children’s bodies were discovered. She has been receiving treatment in hospital since.

In a statement on Monday night, Gardaí said a woman in her 40s had been arrested on suspicion of murder.

“The woman arrested was found at the scene and has been receiving medical attention at Tallaght University Hospital following the incident. She is currently detained at Clondalkin Garda station under section 4 of the Criminal Justice Act, 1984,” the Garda statement said.

The children’s father, Andrew McGinley, earlier released a statement via the Garda saying the children had “beautiful, bright futures” ahead of them and that since their deaths “every breath is a struggle”.

“There are no words. There is only devastation, grief and anguish. Every breath is a struggle,” he said.

“Conor, Darragh and Carla are adored. They all had beautiful, bright futures ahead of them with family, friends and a community who love them.”

Gardaí believe the children were killed in their home on Friday afternoon while they were in the care of their mother, a nurse at Our Lady’s Children’s Hospital, Crumlin, in Dublin.

Ms Morley has been on stress-related leave from her job for a period and has suffered with depression for some time. She was discovered by a taxi driver on the street in the general area of her home in a disorientated state. She was brought home but collapsed outside the house and the driver called the emergency services.

She was taken by ambulance from her home to Tallaght Hospital last Friday around the same time the emergency services and her husband, Mr McGinley, found the children’s remains in the house.

This essential new history of the Irish state is a study of Ireland’s international profile on the world stage, rather than its party politics. Against a global backdrop, it offers a fresh and analytical study of the origins of the Irish state, the Irish revolution and the growth of Irish diplomacy, from just six consulates in the 1920s to over sixty embassies by the 2010s.

ALFREDO: RED CARDS ALL ROUND FOR RANGERS’ COACHES

Rangers have been fined £15,000 by the Scottish FA for failing to act in an “orderly fashion” in games against Celtic and Hibernian in December.

Jackie Baillie has demanded the two most senior officials at the local NHS Health Board in Glasgow are sacked following a series of hospital scandals. And, doubtless, The MSP wouldn’t mind a bit of Jeane Freeman, the SNP Cabinet Secretary for Health, went with them

We always need to be careful about the motivations of making law as a result of one case, but the Derek Mackay pictured above,  controversy throws light on an important weakness in our parliamentary procedures. He has resigned as a Government minister, pocketed £12,000 ministerial severance payment paid by taxpayers, and is failing in the job he was elected to do – to represent his constituents. If he is not charged by the authorities, there is no current mechanism to get rid of him as a MSP until the next Scottish Parliament election, with him being paid £63,579 per annum in the meantime.

Heart doctors ‘held back stent death data’ By Deborah Cohen and Ed Brown  on BBC Newsnight The Golden Jubilee Hospital in Clydebank is recognised as the main hospital for heart surgery for patients in West Dunbartonshire. It was NOT the hospital where these trials took place. Doctors working on a clinical trial for treatment of […]

In a plan that would change the face of British broadcasting, senior aides to the prime minister insisted that they are “not bluffing” about changing the BBC’s funding model and “pruning” its reach into people’s homes. The blueprint being drawn up in government will scrap the licence fee and replace it with a subscription model, and force the BBC to sell off the vast majority of its 61 radio stations but safeguard Radio 3 and Radio 4