Biker dies in serious crash at Mountblow Road in Dalmuir 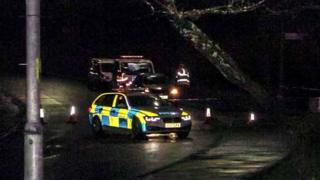 A biker has died after he was involved in a serious crash with a pedestrian and a car in West Dunbartonshire.

Emergency services were called to reports of the collision on Mountblow Road,  Dalmuir, Clydebank at about 16:05 on Tuesday.

Ambulance crews attempted to resuscitate the 23-year-old but he was pronounced dead at the scene.

The pedestrian and the driver of the car were also checked over, but were not hurt.

Police inquiries are ongoing and officers have urged anyone who witnessed the crash or who may have dash-cam footage to contact their non-emergency line.

Mountblow Road at Dumbarton Road remained closed for around seven hours whilst inquiries were carried out.

Sergeant Nikki Taylor, of Road Policing, Dumbarton, said: “Inquiries are ongoing to establish the full circumstances surrounding the incident and we would ask that anyone who may have been in the area at the time and witnessed the collision to get in contact.

“The area would have been busy at that time of the day and I would also urge anyone with dash-cam footage that may be able to assist with our investigation to come forward to police.”

One from the Sixties. Jim McIntyre, father of the former Dundee United, Ross County manager of the same name, is hoisted high by his St Michael’s Boys’ Guild team mates after winning a tournament at The Murrough in Wicklow town during an annual camp there.

The number of people in Scotland who have died with coronavirus now stands at 41, and the number of confirmed Covid-19 cases is now 1,384

Not just in charge but looking after us in this crisis.

During his evidence to the court, Mr Salmond said the claims made about his alleged conduct were “deliberate fabrications for a political purpose” or “exaggerations”.

VIRUS: WORLD WEEPS WITH THE PEOPLE OF SPAIN

Earlier on Saturday, Fernando Simón, the head of Spain’s centre for health emergencies, said that the situation in some regions appeared to be improving even as the country reported another record single-day death toll of 832.

Dr John Ashton, a former regional director of Public Health England, said on Friday: “The government has been too slow to act on this, and they’ve been slow as individuals. I was surprised to see prime minister questions going ahead this week. It was clearly unnecessary.

VIRUS: STATISTICS FOR EACH SCOTTISH HEALTH BOARD

It is based on information published by the Scottish Government and collated by civic hacking project Code the City. It was commissioned by The Ferret to make historical data on the virus more accessible.

Johannesburg-based King had announced his intention to leave this month at the club’s AGM last year, when it was revealed £10m was required before the end of the season.