Even Big Jim Larkin, the trade union hero of last century, was surprised up there on his plinth outside the Irish GPO in Dublin. Picture by Bill Heaney

Harry McGee in the Irish Times 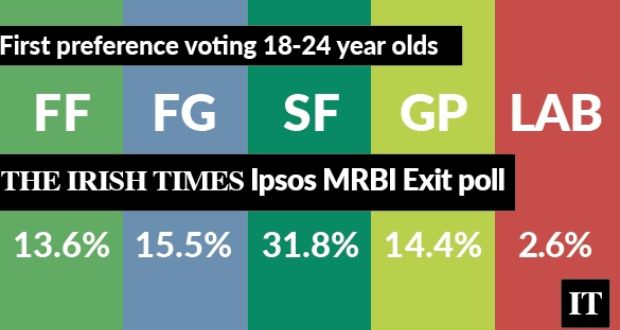 Good morning and welcome to a special Election 2020 political digest, on the day of the general election count.

An Ipsos MRBI exit poll conducted on behalf of The Irish Times, RTÉ, TG4 and UCD yesterday confirms that the issues of issues of health, homelessness and housing dominated voters’ minds in this election to a very high degree.

Health was the major issue for a third of all respondents while housing and homelessness was the main issue for 26 per cent.

Jobs and the economy – which has been traditionally the major issue – was the priority for only 6 per cent, while climate change and pension age were key issues for 6 per cent and 8 per cent respectively.

That said, four out of five of voters polled said the ability to manage the economy efficiently was very important to them.

The big theme of this campaign was change and that was borne out by the poll’s findings. Only one in five voters thought it best to continue with Government and that reflected the Fine Gael share of the vote.

Against this, almost half of voters thought change was needed.

Moreover, a further 31 per cent were of the opinion that “country needs a radical change in direction”.

That shows that there is a desire amongst a third of the electorate for a marked change in direction.

While the macro figures show very low employment and impressive growth figures year on year, it is evident that a clear majority of people do not feel that benefit.

Some 63 per cent said that the benefit in the economy does not apply to them, with a further 37 per cent accepting they had benefitted. Again, it roughly corresponds with the support levels for Fine Gael and Fianna Fáil.

Likewise, two thirds of voters polled were of the view that spending out-trumped tax reduction as an issue.

In terms of the relationship of Sinn Féin with the more traditional parties, there were starkly divided views. A small majority (51 per cent) were favourably disposed to discussion around a coalition, with 45 per cent against.

On the question of a referendum on a united Ireland, there was a clear majority in favour – 57 per cent – compared to 40 per cent against.

Stephen also has a deep dive into the exit poll data and looks at the answers to each of the 15 questions posed by pollsters to voters on Saturday.

Live coverage of the Election 2020 count on irishtimes.com.

The Irish Times is providing live coverage of every count on Sunday and Monday with reporters in every count centre providing rolling updates as they are announced.

Our liveblog will bring you instant updates from all the counts on mobile, tablet or desktop.

Results: Every count as it happens in our Results Hub.

Podcasts: Listen to our expert commentators explain the unfolding results

Video: Can’t make it to a count centre? Watch the drama with us here.

Analysis: Our experts will explain what it all means.

On Monday, our live coverage of the remaining counts will continue on irishtimes.com. The Irish Times will publish a General Election 2020 Results supplement in the newspaper with details from every constituency.

This suggests that the Ireland is heading for either a Fine Gael or Fianna Fail-led Government with Greens and Labour.

This is Sinn Fein’s best ever vote but I do not see them being included in government.

And at midday on Sunday, Cooney wrote:  Still a long electoral counting-crawl lying ahead, but the dominant news this morning is that last night’s Exit Poll placing Fine Gael, Sinn Fein and Fianna Fail neck-and-neck has underestimated the actual voting strength of Sinn Fein. It now looks that Sinn Fein, the erstwhile front for the Provisional IRA, is now the largest political party in the Irish Republic.

It would appear that Sinn Fein is definitely within the portals of Leinster House, the seat of the Irish Parliament, and that pressure will mount on Fine Gael and Fianna Fail to talk to Sinn Fein in the weeks ahead about the formation of the next coalition government.

However, Sinn Fein strategists, not anticipating such a sizeable surge to them on the part of young people, have not run enough candidates in the 39 constituencies nationally.

Cardinal George Pell has been driven from prison to a church property in Melbourne’s inner east after the nation’s highest court quashed his child sexual abuse convictions.

They may not all be answerable within normal timescales. But authorities such as West Dunbartonshire Council which appear to treat the right to know as a disposable extra may lose public trust when they most need it.

She was however able to tell the daily midday press briefing that the death toll in Scotland now stands at 296, an increase of 74 on yesterday’s numbers.

“By working together and observing the latest guidance, we can all play our part in keeping everyone safe.”

“By keeping learning and childcare hubs open in our local authorities, we can make sure children are safe and well looked-after while their parents are doing critical jobs helping our communities.”

The Scottish Environment Protection Agency (Sepa) has agreed to relax the rules governing monitoring, the weight of salmon in cages and how long they can stay there. This is to help fish farms cope with staff shortages caused by the Covid-19 pandemic.

“She was a caring and generous person, especially when it came to her time, having dedicated over twenty years of her life as a home carer to unfailingly serving the needs of the most vulnerable in society.”