Róisín Ingle: His ordered Protestant world was gatecrashed by this chaotic Catholic

My partner’s father went to hospital with a sore hand to find out he had a brain tumour. Death is all around at the moment during this pandemic. This is a wonderful story. 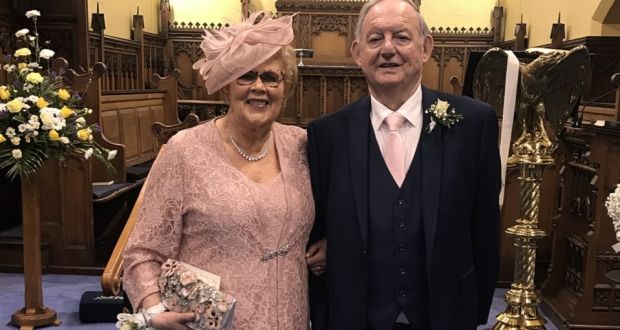 John Hobson with his wife, Queenie, at their daughter Caroline’s wedding last year

I came across some “Advice on Marriage” given by the suffragettes in Britain to young ladies just over 100 years ago. The pamphlet went viral last year. The first piece of advice was unequivocal: “Do not marry at all.”

The second bit listed the kind of men to avoid if the young lady insisted on getting married: “the Beauty Men, Flirts and the Bounders. Tailor’s Dummies and the Football Enthusiasts.”

The third thing on the list suggested the kind of men young ladies might be wiser to go for: “Look for a Strong, Tame Man, a Fire-lighter. Coal-getter. Window Cleaner and Yard Swiller.”

While acknowledging the reductive nature of these male tropes, I thought immediately of my partner’s father, John Hobson. I remembered him as I first saw him, 20 years ago this summer, standing at the ironing board, smoothing out the family’s creases.

He was a window cleaner. A yard swiller. A washer-upper. None of this went unnoticed by me

I think he got the vacuum cleaner out that day too. And another afternoon I watched him outside, on his knees, gingerly tending to some pansies that were planted at intervals so precise, I imagined him having placed them there using a ruler. The hedges surrounding his garden had been clipped to perfection, all sharp lines, no stray leaves in sight.

He was a window cleaner. A yard swiller. A washer-upper. None of this went unnoticed by me. A boy who grew up in a house like this had surely picked up a thing or two. The Football Enthusiast part seemed a cross worth bearing.

I am also thinking of John Hobson because a year ago this week he went to hospital with a sore hand, only to be told he had a massive brain tumour. A year is not long enough to dull the shock. I can still see the several bunches of celery purchased in a hurry and shoved in the boot of the car before we rushed up to Portadown because Dr Google suggested it could help people with brain tumours.

The hand had been bothering John for a while. Queenie, his wife, had noticed he was having trouble changing the gears on the car. “We’ll have to get that gear stick looked at,” she’d say to John, whose middle name might have been “stoic”. One day he couldn’t move it at all, and they went to the hospital, where the whole family’s world fell apart.

John, who used a walking stick after a bad car crash several years ago, was never anything but kind to me, which must have been challenging sometimes.

I was this chaotic, Catholic-reared Dubliner landing in his loyal and ordered Protestant world of the Orange and the Black. One night I appeared and then one day his son was no longer marching – and then he moved away from the close-knit family to Belfast and to Dublin.

I had not put him down as a romantic, but it took him ages to find the sheet music, scouring libraries and archives across Northern Ireland

Later that day they let John come home from hospital. We sat in the sitting room for hours, his six children, their partners, his grandchildren, his Queenie. My daughters sang to him.

It hadn’t been long since his daughter Caroline’s wedding. John, “Tame and Strong”, had gone on a mission to track down a song he wanted the girls to sing at the wedding. It was the song that had been sung at his own wedding to Queenie on internment day, close to 50 years before.

I had not put John Hobson down as a romantic, but it took him ages to find the sheet music, scouring libraries and archives across Northern Ireland. It was to be a surprise for Queenie. And her astonished face, when the girls’ voices rang out in the church, singing the words of a long-ago familiar song, was a prize to him.

John’s own face was a picture of happiness all day long. His life revolved around family and Liverpool and Portadown football clubs. Everything else was window dressing.

That night we stayed in Queenie and John’s house. In the morning we were woken to the sound of Queenie’s fearful calls for help. John was having a seizure; we could hear a loud rattle through his body as he struggled to breathe. My partner got on the phone to the ambulance service and Queenie asked me if I would go into her bedroom and be with John. She was overwhelmed, in a panic. “Please,” she said.

I thought he would die there in front of me. His chest rising, his eyes rolling. I took his hand. I reached for the right words, pretending I wasn’t terrified myself. “It’s okay,” I said trying to infuse my trembling voice with light and love. “There is nothing to be afraid of. We are all here with you. Don’t be afraid.”

His walking stick, leaning on a wall near the television when we came back from his hospital, made his grandchildren cry

The ambulance men came. Strapped him in to a chair. I stood, with the girls, at the top of the banisters as he was carried down. He raised a hand to us on the way. “Bye,” he said faintly in his special Granda John voice, “bye”.

He slipped away 17 hours later, surrounded by family. His walking stick, leaning on a wall near the television at home when we came back from his hospital, made his grandchildren cry.

One year later I recall the closing words of The Wedding Prayer, sung at Caroline’s wedding and then at John’s funeral: “And when at last the lingering shadows gather …”.

He was carried out of the church to the strains of You’ll Never Walk Alone, another song that defined his life, as the bunches of celery wilted in the boot of the car.

He said parts of the national park saw “dangerous” parking on fast stretches of road and groups much larger than two families gathering together.

DISAGREEMENT OVER USE OF JURY-LESS TRIALS

Ronnie Renucci from Scottish Criminal Bar Association said trials without juries may seem the cheapest and easiest solution to the case backlog, but this was not a sound basis for any justice system.

Jackie Baillie, MSP for Dumbarton, Vale of Leven, Helensburgh and Lomond, has called for an urgent review into the day to day running of the NHS by the Scottish Government following the news that Scotland had the third worst excess death rate in the world.

Paisley-born Andrew Neil, presenter of the eponymous BBC politics show and Politics Live, added that many businesses will not be in the same fortunate position and did not expect to set an example for other companies to do so.

“GMB Scotland has campaigned for basic protections for all care workers like PPE, testing and sick pay but the truth is that no one deserves a decent pay rise more.