Fintan O’Toole: Ireland is again collateral damage in Britain’s self-harm. Our neighbour is stuck with a government headed by a chancer and made up largely of zealots and sycophants.

Attitudes behind Brexit resurface in Johnson’s tragic failure of leadership 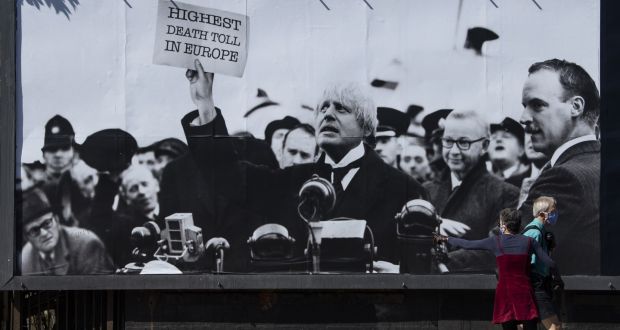 A satirical poster from the group Led By Donkeys depicting Boris Johnson as former British prime minister Neville Chamberlain delivering his “Peace for Our Time” speech.

By Fintan O’Toole in The Irish Times

Even as Ireland dips its toes in the shallow end of escape from lockdown, there is a problem looming on the farther shore. It is Britain.

We exist on an archipelago, most of whose population lives on the eastern island. We share a common travel area. The air route between Dublin and London is, in normal times, the busiest in Europe. In the world we inhabited until recently, about a million trips were made from Britain to Ireland every year.

It is very hard to see how the coronavirus can ultimately be kept under control in Ireland if it remains on the loose across the Irish Sea. We may not be directly ruled by Boris Johnson, but we cannot escape the consequences of his follies and failings.

The brutal truth is that, while Ireland lies in the fair-to-middling range of countries when it comes to success in dealing with this crisis, Johnson’s Britain is among the worst. A rich country that had the advantage of precious weeks of warning about what was coming, a country that has an outstanding nexus of medical and scientific expertise, has nonetheless been unable to prevent many, many thousands of avoidable deaths.

Much as most of us would like to forget the nonsense that was dominating Anglo-Irish relationships before being overtaken by the new crisis, we have to remember that this terrible failure has been brought to us by the makers of Brexit. It is the farce being replayed as tragedy.

The virus found Britain at a moment of self-inflicted weakness. Its civil service had spent four years trying to deal what Johnson called in January “our great national drama” – not dealing with the pandemic but leaving the EU. Its political system had been riven by the same obsession.

As mayor of London, he delegated most of the work to his deputies while he “spaffed” public money on ludicrous would-be monuments to himself

It faced this new threat with a Tory cabinet purged of most of its talent and experience, chosen largely for conformity to the true faith. And above all it had at the very top a lazy, incompetent and staggeringly mendacious opportunist who has proved, to the surprise of no one who has ever worked with him, to be completely out of his depth.

Johnson is a brilliant self-publicist and a master of celebrity. He has a kind of genius for the creation and (until now) maintenance of a persona that most of his compatriots find charming. But a big part of that charm is ineptitude.

His fame outside of Tory and journalistic circles was created by his appearances on Have I Got News For You. His biographer Sonia Purnell wrote that: “Audiences thought him unusually game and somehow authentic; and that his monumental ineptitude when he became guest presenter – fluffing his lines on the autocue and awarding points to the wrong team – was endearing.”

The show of monumental ineptitude was not confined to the small screen. He carried it into the two main public offices he held before becoming prime minister. As mayor of London, he delegated most of the work to his deputies while he (to use a word from his own public school vocabulary) “spaffed” public money on ludicrous would-be monuments to himself, the Boris Bridge and Boris Island.

As foreign secretary, he was so ham-handed that one of his own junior ministers, Sir Alan Duncan, said that cleaning up his messes was a “full-time activity”.

Everyone knew this. Johnson, to be fair, did not hide it – “endearing” screw-ups were his unique selling point. But in the upside-down Brexit world, where expertise and seriousness had become almost treasonous, Johnson’s open contempt for both qualities were proof of his anti-elitist and patriotic credentials.

In this ideological bunker, there was only one imperative – to Get Brexit Done. Since Johnson would do this, what did it matter that his colleagues knew he was unfit to govern? What was the worst that could happen anyway?

Something pretty bad did happen, of course. There can have been no surprise that Johnson reacted to the coronavirus crisis by being Boris.

The journalist who was notoriously addicted to last-minute deadlines let time pass him by – it would be alright in the end, wouldn’t it? The lazy man went on not one, but two holidays, during the weeks when serious planning could have saved tens of thousands of lives.

Above all Johnson fell back intellectually and emotionally on the instinct that underlies Brexit: British exceptionalism.

Britain could not be just one country among all the rest trying to deal as well as possible with a global crisis. This was the Blitz – Spitfires flew again, both figuratively and literally. It was the Finest Hour again: the BBC rushed out a series called Our Finest Hours, splicing together wartime newsreels with contemporary footage of health workers on the front-lines.

And the finest hour means Standing Alone. So Britain could not be seen to participate in a joint EU procurement project. It could not learn from what was happening in other countries and implement the best of it. It had to have its very own strategy, one rooted in ludicrous myths of Britain’s (in reality England’s) ancient and unique love of freedom and ability to take pain without grumbling.

So, on March 10th, Johnson speculated on live TV that “one of the theories is, that perhaps you could take it on the chin, take it all in one go and allow the disease, as it were, to move through the population” – not an endorsement of such a possibility but clearly a suggestion that it might be valid.

On March 20th, when Johnson belatedly announced the closure of pubs, clubs and restaurants, he mourned the terrible necessity of “taking away the ancient, inalienable right of free-born people of the United Kingdom to go to the pub… it seems to go against the freedom-loving instincts of the British people.”

Last week, in announcing his confused and confusing plans for exiting the lockdown Johnson said he was relying on “good British common sense”.

Ordinary common sense would have been rather more useful. So would competence, clarity and leadership. The belief that Brits are uniquely “freedom-loving” may be nonsense but it had a powerful effect on Johnson’s indecision – it lay behind the fatal delay in imposing a lockdown. The assumption was that while foreigners might put up with that sort of thing, the British people would not.

This is where the exceptionalism at the heart of Brexit met real-time policy-making in the coronavirus crisis. It may also have affected behaviour on the ground: in the early stages of the lockdown in the UK, there was a strong correlation between Brexit-voting areas and lower levels of compliance with social distancing.

The problem for Ireland is that the factors that led to such a tragic failure by the British government are not going to just fade away. Our neighbour is stuck with a government headed by a chancer and made up largely of zealots and sycophants. The deep tensions between the four parts of the Union laid bare by Brexit have resurfaced with remarkable rapidity in this crisis, with each of the three devolved governments practising its own form of distancing from London.

Johnson’s personal brush with death may have chastened him and forced him to behave more soberly. But this has merely revealed that, if you strip away the brilliantly constructed clownish persona, there is nothing much there except windy rhetoric and silly gestures.

Above all, the Brexit fever dreams have not abated. Polls show that even those who voted Leave want Johnson to ask the EU for an extension to the period of transition.

But the monomania of the “clean break” has not gone away. All the delusions of the past three years – Britain holds all the cards, the EU will cave in at the last minute, we will have cake and eat cake – still mesmerise the Tories.

A country that is trundling ahead towards a no-deal Brexit at the end of this year is not a country that has come to terms with basic ideas of risk and responsibility.

An ideology of self-harm has not been set aside, even with the British people still very much in harm’s way. The problem for us is that, as with Brexit, so with the coronavirus: Ireland is collateral damage.

One thought on “VIRUS: DELUDED BORIS WANTS TO HAVE CAKE AND EAT IT”