By Patsy McGarry of the Irish Times 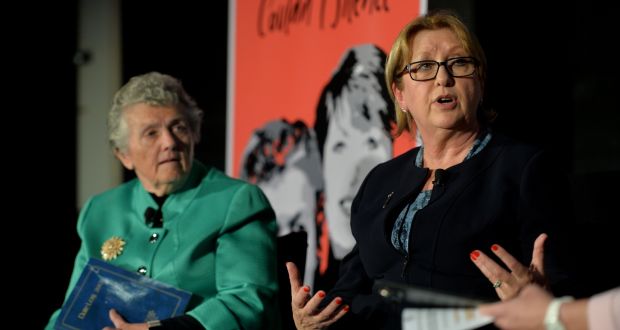 Former Irish president Mary McAleese, who was recently based at Glasgow University, has said it bothers her greatly to see people who are strangers to Ireland treated in ways that are contrary “to the ethic of our country and our people”.

Without specific reference to protests against accommodating asylum seekers in Achill, Ballinamore, and Oughterard, she spoke on Saturday of people who had to leave their homes and “suddenly they have nowhere, and nothing. And now they rely on the kindness of strangers.

“My God tells me I have to be the stranger who is kind. That simple . . . it bothers me greatly finding that [in] a country that I’m so proud of, that sometimes people are not experiencing the kindness that I know is the ethic of our country and our people.”

She pointed out: “We relied on it [kindness] ourselves so often when we went as emigrants to other countries, poor, our two hands the one length, looking for opportunity.”

Ms McAleese was speaking at a conference in Trinity College Dublin on Saturday afternoon, alongside US theologian and Benedictine nun Sr Joan Chittister, under the title “The Women The Vatican Couldn’t Silence”.

In 2001, and under threat of excommunication by Rome, Sr Chittister spoke in Dublin at the first Women’s Ordination Worldwide conference. The Vatican did not follow through on its threat.

At Saturday’s conference both women received a standing ovation on arrival at a packed Edmund Burke Theatre for a discussion chaired by broadcaster Ursula Halligan.

Sr Chittister said that “silence, invisibility is the only role a woman has in the Catholic Church. We make very good window dressing, but in terms of being able to contribute as a baptised person to the development of the church, we are not there.

“Some day you have to wake up and say what you see, and what I see is that the Catholic Church, for women, is a totally owned subsidiary of pious males. We really are not full members of the church. We are the outside edge.”

Ms McAleese said women were “deliberately made invisible. Deliberately meant to stay invisible, and structurally the architecture of the church is designed to create and maintain the invisibility and powerlessness of women.”

Retired ex-president Mary McAleese (centre) with her husband, Martin, at a conference in Dublin. Picture by Bill Heaney

She recalled Pope John Paul’s description of sex in marriage from his book Love and Responsibility. He wrote, she said, that: “It is the very nature of the act that the man plays the active role and takes the initiative while the woman is a comparatively passive partner whose function it is to accept and experience.

“For the purpose of the sexual act it is enough for her to be passive and unresisting, so much so that it can even take place without her volition while she is in a state where she has no awareness at all of what is happening – for instance when she is asleep or unconscious.”

Ms McAleese said that “that is how we are treated in the church”.

She recalled how the late moral theologian Fr Seán Fagan “called Pope John Paul out on that and said the obvious. He asked a question. He said: ‘Can this really be Catholic Church teaching? It sounds like rape.’ What happened? Pope John Paul become a saint. Seán Fagan becomes silenced. That’s our church.”

Repeating that the church ban on the ordination of women was “codology dressed up as theology”, she spoke of the “lie at the heart of priesthood today, a fundamental lie”.

Today the clericalisation of priesthood did not seem to be attracting many, she said, “but . . . [a number of those attracted into it seem to be] deeply problematic in their own sexuality. Why? Because the church demands of them that, if they are not heterosexual, that they pretend to be. That has caused huge problems.”

“The number of fake hetero, misogynistic, homophobic” gay people she met there frightened her, “because the homophobia of people who are gay is a lie. It’s a vicious lie, but they live it and in the living of it they make others, apart from making themselves, miserable.”

If they are pastors “their capacity for dispersing misery, trust me, is immense. That worries me greatly.”

Referring to the ban on her taking part in a conference on women at the Vatican in March of last year, she said she “never received an explanation as to why [she was banned], even though I asked for one”.

The man who banned her, Cardinal Kevin Farrell, was, “in fairness”, new in the job as the Vatican’s prefect of the Dicastery for the Laity, Family and Life, she said.

The ban puzzled her too as “it was known that the pope was coming to Ireland last year and Cardinal Farrell, since he was born in Drimnagh, probably did know that I had been the president of Ireland for 14 years.

“That bothered me, that he would think it alright to silence me knowing that the pope was coming to Ireland, to my country. The complexity of that bothered me.”

It was why “I tried very hard for a period . . . to deal with the matter diplomatically and to get the things rescinded”, she said.

More generally, where deference to clergy was concerned, she said she believed that, “for example with our priests and our pastors, [we need to] strip away the deference, the false deference, and insist on being listened to on equal terms”.

In her view, “the vast majority of bishops worldwide are cowardly. They are cowed, in their turn, [by] the deference they offer to their superior and the overreach of obedience to the magisterium [the Catholic Church’s teaching authority].”

As an example she recalled being in company of former archbishop of Boston Cardinal Bernard Law, who had to resign in 2002 for mishandling allegations of clerical child sex abuse there. She said the cardinal was “in the company of people who were actually offended that he had been invited, but yet the same people would kiss his ring”.

It came to her turn. “I just said ‘ no way’. I couldn’t do it. I was in the company of two other clerics who I knew . . . how offended they were to see him there, and yet they kissed the ring of that man.”

She also recalled the recent comments of Bishop of Waterford and Lismore, Phonsie Cullinan, denouncing yoga. “I speak as somebody who knows him and I think he’s a fabulous singer.”

He is also “a fine person, but merciful hour, sometimes he comes out with stuff that just stops you in your tracks and you think, ‘Ah, seriously Bishop Phonsie?’ Yoga? A bunch of old ladies in lycra with rolled-up mats trying to get their muscles working again? I mean, just give them a break for God’s sake!”

Among those in attendance at the discussion was TCD provost Dr Patrick Prendergast. Last Wednesday it emerged that Ms McAleese had been elected unopposed as chancellor and head of the university.

Commenting on this, she said she was “thrilled”. It meant “a lot to me. I love the bones and stones of this place. I love everything it stands for. I love its history. The history of this university is fascinating, 400 years.”

She recalled how a late 19th-century provost there banned women students. He “was absolutely morally certain they would be a danger to the men. In that respect he was absolutely prophetic. He also said that they would get in over his dead body.”

Women were finally admitted to TCD in 1904, “and life has never been the same since”, she said.

Patsy McGarry has been Religious Affairs Correspondent of The Irish Times since 1997 and has been with the newspaper since 1994. Prior to that he reported for Magill magazine, the Irish Press, the Irish Independent, and Sunday Independent. He was awarded a national journalism award for political comment and analysis in 1993 and the European religion writer of the year award in 1998. Author of three books, the most recent a biography of former President Mary McAleese, published in 2008, he edited a collection of essays on Christianity, published in 2001. He frequently appears on local radio as well as national radio and TV.