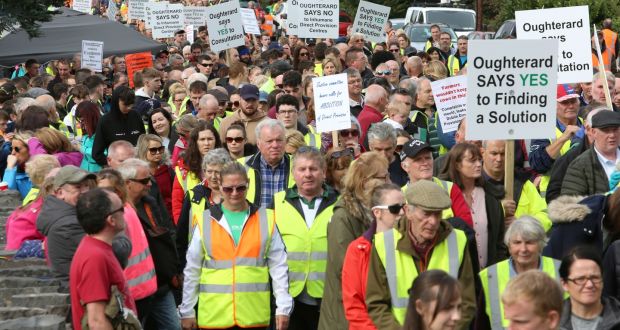 The silent protest walk in Oughterard, Connemara, in September against a direct provision centre at the former Connemara Gateway Hotel. Photograph: Joe O’Shaughnessy

By Una Mullaly of The Irish Times

For 20 years, successive Irish governments and the Department of Justice have pursued the racist, inhumane system of direct provision. This system has been opposed by human rights groups nationally and internationally.

It has made millions and millions for people who own hotels who are paid to house some of the most vulnerable people in our society. This system has been designed to be opaque, nebulous and hidden, and that design is also about making it hard to confront and hard to dismantle.

For a long time, direct provision has been yet another shadow in Ireland’s dark history of institutionalising people rather than caring for them. Hiding people away solves nothing. In fact, it increases the likelihood of something festering.

For Irish society, direct provision has also been a time bomb. Removing people’s autonomy, stripping them of their rights, enforcing poverty and further marginalisation was never going to work out well.

We are now witnessing what happens when governments refuse to face up to the fact that something is very broken, when they refuse to lead, and when they decide on intentional marginalisation as policy.

When something like affordable housing is so unattainable, people can start mentally organising who should be first in the queue

Some are, many are not. We know that far-right, opportunistic provocateurs are using this discontent as leverage for their own agenda and ideologies rooted in the demonisation of “the other”. That is a fact. It’s happening online, and it’s happening on the ground.

We need to listen to everyone’s concerns, and weed out the disingenuous ones. We need to be mindful of what social media messaging we’re consuming, because our ideas are formed, they don’t just appear.

The “look after our own” mentality is a visceral argument, because there are plenty of towns, villages and communities in this country that feel – and are – left behind, under-resourced, devoid of opportunities, and with high outward youth migration.

While the majority of those who voted in our recent referendums were happy to extend equality of reproductive healthcare and marriage rights to others and to themselves, what happens when we’re constantly leaning on a sense of fairness in society, but when people leave the polling booth, that sense of fairness is not apparent in their own communities?

It’s not apparent in their job opportunities or rent prices or health services or public transport. The people who are protesting against direct provision may feel under attack, but the urge to personify that attack by targeting asylum seekers and refugees is a classic gravitation.

Don’t hate the player, hate the game. People coming to this country for refuge are not responsible for the direct provision system. They want safety and shelter and a better life than whatever grimness or trauma they are fleeing, just as Irish refugees did when they were fleeing famine, poverty, war, and the oppression of colonialism.

The direct provision crisis – and it is a crisis – has been exacerbated by the housing crisis. Many people in direct provision who have had their asylum claims processed and approved have been forced to stay living in the system because they cannot find housing.

How are we meant to house asylum seekers properly, as opposed to warehousing them, when people with decent jobs struggle to meet rent or even find somewhere to live or buy?

The inaction on the housing crisis is now having an unintended, but obvious, consequence. When something is scarce, we impose prioritisation. When something like affordable housing is so unattainable, people can start mentally organising who should be first in the queue.

We need to turn this around now

All of these protests have a common denominator. Local people repeatedly raise the inadequacies of the Department of Justice’s communication with people living in villages and towns where direct provision centres are planned. Something is clearly wrong there.

Communities also need political leadership, not just populist reactionary sentiments, as we’ve seen from some local politicians. Resentment is easy. Capitalising on anger is easy. Benefiting from fear is easy. Demonising people not “like you” is easy. Work harder.

This current discontent may also be useful for neoliberal parties to sit back and watch communities identify misplaced targets of blame. Anyone but them. Anything but neo-liberalism itself, anything but capitalism, anything but the inequality that has been enshrined. That’s the real problem here, certainly not asylum seekers.

We need to turn this around now. The potential for something very dark happening in our society concerning racism can be used as an opportunity to get rid of this racist system once and for all, and create something fairer for everyone, while maintaining our integrity as a country where people are welcome and are cared for.

The maxim attributed to Eleanor Roosevelt – that a woman is like a teabag; you can’t tell how strong she is until you put her in hot water – also applies to society. We don’t know how robust we are until we are tested.

The narrative that Ireland is unique in responding to austerity policies with progressive social change cannot be spun forever, because there are cracks in that narrative, and they have the potential to turn into chasms.

Let’s not paper over those cracks. Let’s repair them properly, together.