Did politicians pay for their poppy wreaths today? Research carried out by Sky News has revealed that some of the UK’s largest military charities are sitting on vast sums of money despite many veterans still struggling for help.

One chief executive has described it as “a scandal” and another admitted it shouldn’t happen. 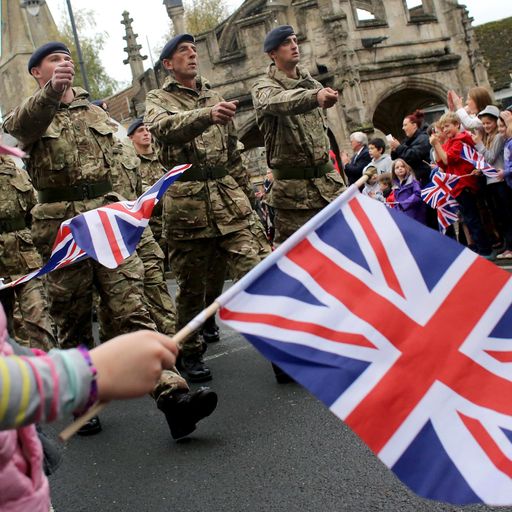 Ex-soldiers asked for help but struggled to get any

It is common practice, and sensible, for charities to keep six to 12 months’ income in reserve in case of financial problems, but one charity, the RAF Benevolent Fund, has almost two years’ income (£37.4m) in reserve.

In a statement to Sky News, the charity defended itself, saying: “Our board of trustees has agreed a minimum of £30m in free reserves is required to ensure we are able to look after those members of the RAF family we support, throughout their lifetime, whatever happens to the fund.

“Robust financial management of our reserves is based upon long-term projections of the needs of the RAF family (serving and retired personnel and their dependants), taking into account the uncertainty of future income.”

Veterans interviewed by Sky News complained that the money wasn’t always filtering down to those who needed it and the bureaucracy had left some of them suicidal.

“Every time I have to open this box it breaks me,” one said, describing the mound of letters he has sent to the government and charities pleading for help.

Ed Tytherleigh from the Confederation of Service Charities admitted that co-ordination between charities could be better:

“At the local level I think there is really good bilateral co-ordination between different veterans charities. But I do agree that on a national level there is a lack of overall strategic co-ordination in how the veterans’ charities operate.

“There are some wonderful exceptions but, as a rule, as a whole, we are not collaborating as we should do.”

“If an individual reaches out for help, they should get it,” said Ed Parker, chief executive of Walking With The Wounded.

“And if an organisation is unable to provide it to that individual there will be another one that can. One should never just say no, and if it does happen, it’s a failure.”

Although veterans’ care in the UK has improved markedly in recent years, and the current government has established the first office for Veterans’ Affairs, the veterans’ minister himself, Johnny Mercer, has previously said the way the UK treated its veterans was a disgrace.

The research has been published to mark five years since the end of combat operations in Afghanistan.

Sky News is broadcasting a Brexit-free channel, weekdays 5pm to 10pm on Sky 523