Rick O’Shea: ‘I was never passionate about the idea of being on the radio’ 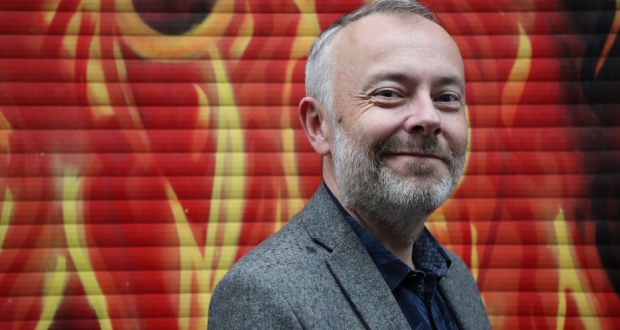 The Book Show would seem to throw Rick O’Shea a lifeline, but its run has only been guaranteed until Christmas. Photograph Nick Bradshaw/The Irish Times

With hindsight, Rick O’Shea admits he was out of his depth. Back in 2015, when he was offered the job of hosting The Poetry Programme on RTÉ Radio 1, O’Shea had plenty of experience as a pop DJ, but when it came to arts broadcasting or the book world, he was a novice. As for the subject to hand, he was even more lost.

“To be honest, I had no grounding in poetry of any kind, as was quite obvious to anyone who had conversations with me at the time,” O’Shea says, with unembarrassed candour. “If I could go back and do it again, would I take on that programme? No, I wouldn’t. What happened was I was offered something I always wanted, a way into arts and culture programming, a field I loved. I thought long and hard about it, and I thought ‘I know essentially nothing about this field’. However, if you say no, you may never get asked to do anything like this again.”

He said yes, and his instincts have proved correct. This Sunday has O’Shea debuting as host of the Book Show on RTÉ Radio 1. As well as becoming the programme’s first full-time presenter since the departure of Sinéad Gleeson two years ago, his new job sets the seal on his unlikely transformation from polished 2FM pop jock to book industry stalwart.

Over the past four years, the affable 46-year-old Dubliner has become a regular fixture on the literary circuit, interviewing authors at festivals, curating events such as the Waterford Writers’ Weekend and running the self-explanatory Rick O’Shea Book Club on Facebook. He’s even writing a short story for a forthcoming anthology of working class writers. So when he was offered the job, “he bit the hand off”.

“I’m perfectly comfortable this time around,” he says of his forthcoming gig. It’s a different tune from his tenure on the Poetry Programme, where he did a creditable if slightly tentative job – he did two series before being replaced by Olivia O’Leary – but was never quite accepted into the Irish poetry world.

As O’Shea talks over coffee in a Dublin hotel, he has the smooth tones and chatty flow of his on-air DJ person

“I was never part of that universe, in the same way that I would like to think I belong in the Irish book community these days. But again, I did that arseways, I’ve done this one the right way around. I’ve built up a certain amount of people knowing who you are, that you’re not an idiot.”

An idiot he is not. As O’Shea talks over coffee in a Dublin hotel, he has the smooth tones and chatty flow of his on-air DJ persona, but is more self-consciously serious as he discusses his personal taste in books – literary fiction, non-fiction, a bit of sci-fi “for fun” – as well as his professional trajectory. Talking about the new series of the Book Show, made with producer (and sometime BBC Northern Ireland chat show host) John Daly, O’Shea is keen to differentiate it from the programme’s previous iteration. Whereas Gleeson’s show was imaginatively made but distinctly literary, O’Shea’s version seems more reader-oriented, with author interviews – the names of whom are still under wraps – mixed with writers answering questions put by local book clubs.

“It’s like taking over Doctor Who when you’re Russell Davies, ” O’Shea says. “You can’t go, ‘What would Tom Baker have done?’ You have to go, this is how we’re going to play it from here. It’s a rough analogy, and I’m very sorry I said it out loud now,” he adds, mock ruefully.

Such pop cultural references speak of his years as an easygoing, wisecracking disc jockey, a career which is now under threat. Last month RTÉ announced it would be closing all its digital radio channels, including RTÉ Gold, the oldies station where O’Shea has presented a late morning show since his exit from the ruthlessly youth-oriented 2FM two years ago. Given the low listenership figures for digital radio in Ireland, O’Shea felt the stations were vulnerable – “You always hope the bullet passes you by, but it didn’t” – but was still surprised to learn of the closures when leaked details of the cuts appeared in The Irish Times. “I found out quite suddenly, so there were phonecalls from management to everyone concerned at 11 o’clock at night,” he says. “None of us who occupy these positions know what we are going to be doing for a living next year, nor do we know exactly when everything is finishing.”

As a full-time employee of RTÉ, O’Shea shouldn’t lose his job there: “There are no compulsory redundancies – yet.” The Book Show would seem to throw him a lifeline, but its run has only been guaranteed until Christmas. “The plan is for us to make programmes throughout 2020, fingers crossed. But we have no definitive answer because of the precarious state of the finances.”

‘People kept telling me; ‘you’re not bad at this’ – you fall into something that you’re accidentally good at. But I was never passionate about the idea of being on the radio’

O’Shea never planned to work as a DJ this long. Growing up in Crumlin in Dublin, back when he was known by his birth name Paul Crossan, he loved music, but wasn’t interested in radio. “I couldn’t have cared less about it,” he recalls. “I had friends who were into radio as an end in itself since they were kids, who were building their own stations from age 15. I was not one of those guys.” But after entering a presenting competition on a Dublin pirate station in his teens (“because I wanted the prizes”), he discovered he had an aptitude for the medium. After stints in hospital radio, he ran the college station when a student in UCD, before landing a job as DJ on local radio. “Because people kept telling me, ‘you’re not bad at this’, you fall into something that you’re accidentally good at. But I was never passionate about the idea of being on the radio.”

Even so, he was keen enough on his career to change his name. “I was given it, whether I liked it or not,” he says, detailing how he was allocated the name after joining commercial station Atlantic 252. “When you’re a 20 year-old kid playing pop music, it’s a perfectly acceptable stupid name to have. When you’re a 46 year-old man, interviewing a Booker prize winner, it becomes a little weirder. But it hasn’t stopped me doing loads of things I want to do.”

O’Shea has had to overcome greater obstacles, not least his epilepsy. He was diagnosed with the condition at age 16, he has lived with it to varying degrees of distress ever since: he last had a seizure in 2010. “Does it affect my daily life? No, because in theory, once I take my medication in the morning I should be fine. But that doesn’t constitute a guarantee.”

Such deeply personal trials help O’Shea put professional travails into perspective. Which is just as well, given how much he was moved around the schedule in 2FM: “I did 17 different time slots in 16 years. I was never let find stable ground under me.” Even so, he says he was often fulfilled at the station, as well as being able to raise three children with his ex-wife.

As for RTÉ’s current woes, he sighs, “I think this is our fifth crisis in my time here.” Yet O’Shea is clearly concerned that the network’s public service broadcasting mission may be irretrievably damaged by its latest upheaval. “Given where the media landscape is in the world, it’s a dangerous time to let something like that teeter over the edge.”

It’s also a tricky time to change career direction, particularly towards something as precarious as arts broadcasting. “As you know, in many areas of Irish life, arts and culture comes quite close to the bottom when it comes to money spent, we tend to suffer from a trickle-down effect,” he acknowledges. But he rejects the notion that cultural programming such as the Book Show is a niche sector. Unsurprisingly for an avid reader, book club supremo and mainstream pop DJ, O’Shea aims to maximise his show’s appeal. “I don’t want to use the word specialist, because it’s not. Reading books is a pursuit of a vast tract of people in this country, not just something for a specific elite. You have to presume there’s a huge appetite for reading there.”

It remains to be seen if O’Shea can connect with Ireland’s huge reading public. His polished delivery and easy patter may seem an odd fit for a cultural show, but such traits didn’t stop Mike Murphy from being an accomplished and popular host of The Arts Show on Radio 1. For the moment, O’Shea hopes that the Book Show marks – yes – a new chapter for him.

“If I was told ‘you’re not going to be doing music radio any more’, and let’s face it, there’s a very high probability that’s going to happen, I’d be fine with that. And if I was told that I’d end up doing arts programming of one kind or another, I’d be thrilled.”