The wild chase of a murderous ‘Cork tramp’ in Co Donegal

In 1870, a mob ran down a ‘ragged’ man after hearing rumours about a terrible crime in Glenties

By Dean Ruxton in The Irish Times 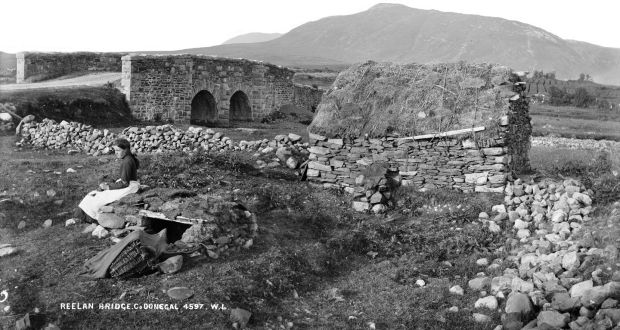 A woman sits near a bridge at Straboy, Co Donegal, not far from the scene of the chase, circa 1865-1914. Photograph: National Library of Ireland/Flickr Commons

In a remote area of Co Donegal, workers stopped to watch a man run across the fields. He carried a revolver in his hand.

The runner was ragged, and appeared to be headed for Stranorlar. As he navigated the rough terrain north of Binbane hill, he ignored the urgent questions asked of him by the turf cutters and sheep herders whose paths he crossed. They thought, perhaps, he was chasing a wild dog. Some simply assumed he was “a maniac”.

But the cries of an emerging mob in pursuit of the runner, coupled with the firearm, gave the curious onlookers cause to drop what they were doing and join in the chase. And what a chase; stories in The Irish Times and documents the National Archives of Ireland describe the pursuit of the “Cork tramp” John McCann on the afternoon of June 7th, 1890, as a pretty remarkable spectacle.

“The race was one of the wildest and most exciting that can be imagined,” declared an Irish Times report some days later. “The peasantry learning the nature of the man’s crime, and knowing that he was armed, lost some time preparing themselves for the chase, which gave the run-away room for a good stretch ahead, but when equipped for their undertaking, some with guns, some with reaping hooks and turf spades, they never lost sight of their man . . .”

Many joined the hunt without knowing anything about the grave allegations against their target. Those who weren’t fit to join the chase did their best to spread the word about the pursuit and a messenger was despatched to Glenties to alert the police. The news spread quickly, and officers from Ardara, Glenties, Tievelough, Mountcharles and Ballyshannon set out to cut the runner off.

As he fled over mountain and marsh, the man shot his revolver back at the mob at least once. The chasers returned fire from their muskets, according to one report.

The story that spread through the mob was that the man – as yet unnamed to them – had shot a woman in Glenties. On the back of that allegation, he was pursued for seven or eight zig-zagged miles over challenging ground – “among the roughest and wildest in Donegal”, by the estimation of The Irish Times. Four hours after the chase began, it ended with the fugitive’s surrender.

The police were denied the final act of capture. That went, instead, to the mob – for whom The Irish Times had no small amount of praise: “What makes the action of the peasantry still more commendable is that after the would-be murderer had fired his last shot in the air and thrown away his revolver as a sign of submission, not one of them laid a rough hand on him, but formed themselves in a circle around him, and remained in this position until Sergeant Anderson, of the Tievelough Station, came up and took him in charge.”

Shot in the chest

The exhausting chase earned many lines of newsprint. More newsworthy was the man’s crime, which had been accurately gathered by the mob; McCann had, that afternoon, shot a woman in the chest as she washed clothes.

McCann was “of the tramping class”, and early dispatches noted he had a “military look”. That was confirmed by later updates, which revealed he was a discharged soldier who had spent two years in India.

McCann had arrived to the area the night before and slept in a local workhouse. Registers for the Donegal workhouses for that night include an entry for “John McCann”, with a handful of additional particulars: male; labourer; aged 38; Catholic; single; and of “ragged” appearance.

The events of the next day – the day of the chase – can be gleaned from an early Irish Times report, as well as one report from the Belfast Newsletter, which detailed some depositions at a special court sitting five days after McCann’s capture.

McCann was from Cork, and had not been in the area before that weekend in June, 1890. At about 1pm on the 7th of that month, he arrived at the door of a woman named Bridget Gallagher, whose husband was working in a nearby bog. The “Cork tramp” asked if he could light his pipe.

Bridget, who was pregnant at the time, granted him entry and the stranger was shortly on his way. But he returned 15 minutes later, saying his pipe was out again. Without warning, he then produced a revolver, pointed it at Bridget’s chest and pulled the trigger.

The Irish Times said the bullet “penetrated her left breast, took a slanting course downwards through the flesh, and has not been extracted”. It was later theorised by the doctors attending Bridget, who survived the shot, that the bullet had exited her body and fallen in the field as she ran to alert her husband. Bridget’s sister-in-law fled the house after hearing the shot and seeing smoke outside the kitchen. The word spread, McCann ran and the chase began.

The violent and dramatic saga was condensed in headlines as the “Desperate Outrage in Donegal” in the case of The Irish Times, and more specifically as “The Binbane Shooting Outrage” in the Belfast Newsletter. One common aspect of each news story, as well as constabulary reports, was the total absence of a motive.

McCann, upon his capture, admitted he fired the shot. He was undefended at a special court sitting in June, asked no questions and pleaded guilty. He was sentenced at the following assizes that July in Lifford.

The short Irish Times report following that hearing said: “His Lordship said that the prisoner’s conduct had no possible excuse. It was dictated by a recklessness almost amounting to insanity. The crime was a narrow remove from being one of murder.”

McCann, the report says, had some previous and unspecified offences on his record. He was sentenced to 15 years’ penal servitude.

The constabulary report referring to the case states, simply: “No motive whatever can be assigned for the outrage.”