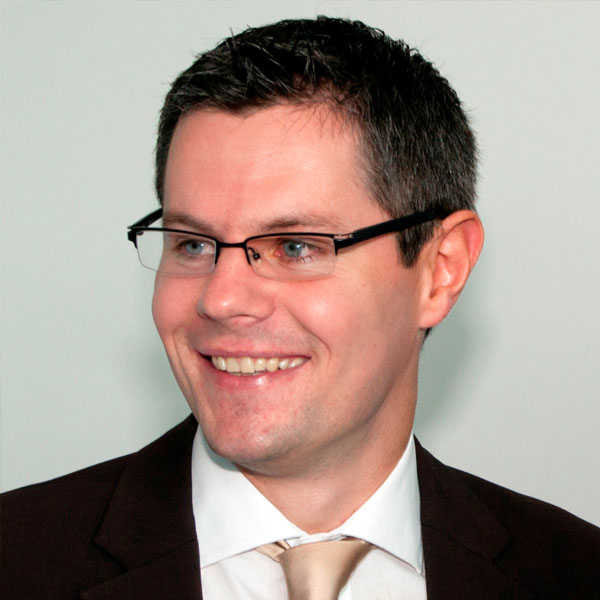 Scotland’s finance secretary has resigned his Cabinet post after the SUN newspaper alleged he had been sending messages to a 16-year-old boy.

Derek Mackay was due to present the Scottish government’s budget at Holyrood this afternoon, but it goes without saying that he will not be now be doing that.

He was due to set out his latest tax and spending plans at Holyrood, but Mackay will now see the budget delivered by another rising star of the SNP, his junior minister Kate Forbes, pictured below left.

First Minister Nicola Sturgeon took questions at midday when the Scottish Sun’s revelations that he contacted the boy on social media over a six-month period, inviting him to dinner and to attend a rugby event, were raised by Tory Party leader in waiting Jackson Carlaw MSP.

Update: Derek Mackay has resigned as finance secretary. He has been suspended by the SNP and is no longer a member of the SNP group.

The BBC had contacted the Scottish government and Mackay for comment, but no response had appeared in any part of the media until white-faced and shocked looking First Minister Nicola Sturgeon got to her feet for FMQs and asked for opposition members to treat the issue as they would like to be treated if it were one of their own.

She said she knew nothing at all about the situation until last night and only got to know more from reading The Sun this morning.

The SUN details allegations that the 43-year-old politician contacted the boy “out of the blue” and sent about 270 messages on Instagram and through Facebook.

It has published a list of conversations involving Mackay and the boy.

In one of the exchanges it is claimed that Mackay told the rugby playing teenager , who has not been identified, he was “cute”. In another, the boy confirmed he was 16 and tells Mackay “not to try anything”.

The newspaper also quotes the boy’s mother calling for Mackay to be removed from his post.

Hubristic and often overbearingly arrogant,  Mackay, who has been widely tipped as a future first minister, came out as gay when he left his wife and two sons in 2013.

He has been completely open about his sexual orientation and attends and has been a prominent figure on the gay party scene in Glasgow.

These allegations about the the contact with the 16-year-old have arrived embarrassingly on the same day as he was due to present the Scottish government’s spending plans for the next years at Holyrood – a major set piece event at Holyrood.

Details of his personal life have begun to emerge, including the fact that his own family was once made homeless and that he attended Renfrew High School before going on to Paisley University. He was later elected at the age of 21 to become one of the youngest councillors in the UK. 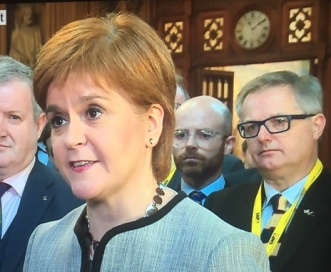 First Minister Sturgeon with local MPs Martin Docherty-Hughes and Brendan O’Hara and the Holyrood parliament in Edinburgh, where FMQs took place at midday today. The SNP Budget statement is scheduled to be delivered this afternoon.

FM Nicola Sturgeon and her SNP Cabinet colleagues were stunned by the news and this morning were locked in an office in the East Wing in the dark, grey corridors of St Andrew’s House in Edinburgh’s Regent Row discussing what to do next.

It was obvious from here statements in the Holyrood chamber that she expects an inquiry to take place.

Sky News reporter James Matthews was speculating that the definition of what Mackay was grooming a young person with the attention of committing a crime against them could be a matter for Police Scotland, but they were saying nothing about that at this stage.

There seemed every possibility that the Budget, which it was planned would be “sold” by the SNP to the public as a “No Cuts Budget” would be postponed, but that seems unlikely to happen now.

Mackay, who is suspended and was not present at FMQs, is looking down the barrel of a very real possibility that his time in politics is over.

Labour MSP Jackie Baillie said: “This news has been deeply shocking. What we must not forget here is that a 16 year old boy is at the centre of this incident and we must support him and his family during this time.

”It’s right that Derek Mackay has resigned as Cabinet Secretary for Finance and the Economy in the Scottish Government.  And that he has also been suspended by the SNP.

“He has abused his position of power both as an MSP and as a government Minister. Many people believe he should resign his seat in the Scottish Parliament, but that is a matter for him.”

He had signalled his intention to spend more on projects to tackle climate change in his budget, but would have needed the support of other parties, most probably the Greens or the Tories,  to pass his plans.

Mackay would have been putting the finishing touches to his preparations when he was contacted by the Scottish Sun on Wednesday evening, before the newspaper released the story at 23:20.

Scottish local councils, including West Dunbartonshire Council, were waiting to take a lead from Mackay’s Budget which is usually delivered earlier but was delayed because of the UK General Election.

This episode could reflect badly on Nicola Sturgeon’s judgment when it comes to choosing the right people to take important positions in her Cabinet and it will leave a huge question mark over her own ability to lead the campaign for Scottish independence.

Today at lunchtime no members of the SNP, including elected politicians and party members, was available to comment to The Democrat which they have banned for the spurious reason that we might report on matters which they felt might reflect badly on them.

Comments just coming in include this one from Scottish Liberal Party leader Willie Rennie, right. He said Mackay should go and go now.

He said: “These are troubling and alarming events. Derek Mackay should step down as an MSP. We must support the young person and his family, who have been targeted by a person in a position of power.

“It’s important that we understand what went on, what action has been taken so far and what action will be taken now by Parliament, Government and the SNP.”

Later, on this afternoon’s budget statement, Scottish Liberal Democrat leader Willie Rennie said:  This is a budget that is going to need substantial revisions. We need to see serious efforts to support local government, the police, mental health, nursery education and the environment.

“In particular, councils are buckling under pressure. The services they manage have been scraped back and back by years of under-funding and this budget doesn’t deliver a fraction of the funding they need to get things back on track.

“The budget also needs to remove any spending on work on independence at a time when we need stability and public services need as much funding as possible.

Pat was a long serving member of the Clydebank Male Voice Choir and was the Section Steward for the bass section. He was renowned for a cheery disposition and his bag of throat sweets that came with him to every rehearsal and concert.

Have you been given a risk assessment recently in relation to Covid19 and carrying out your role? 88.5% No 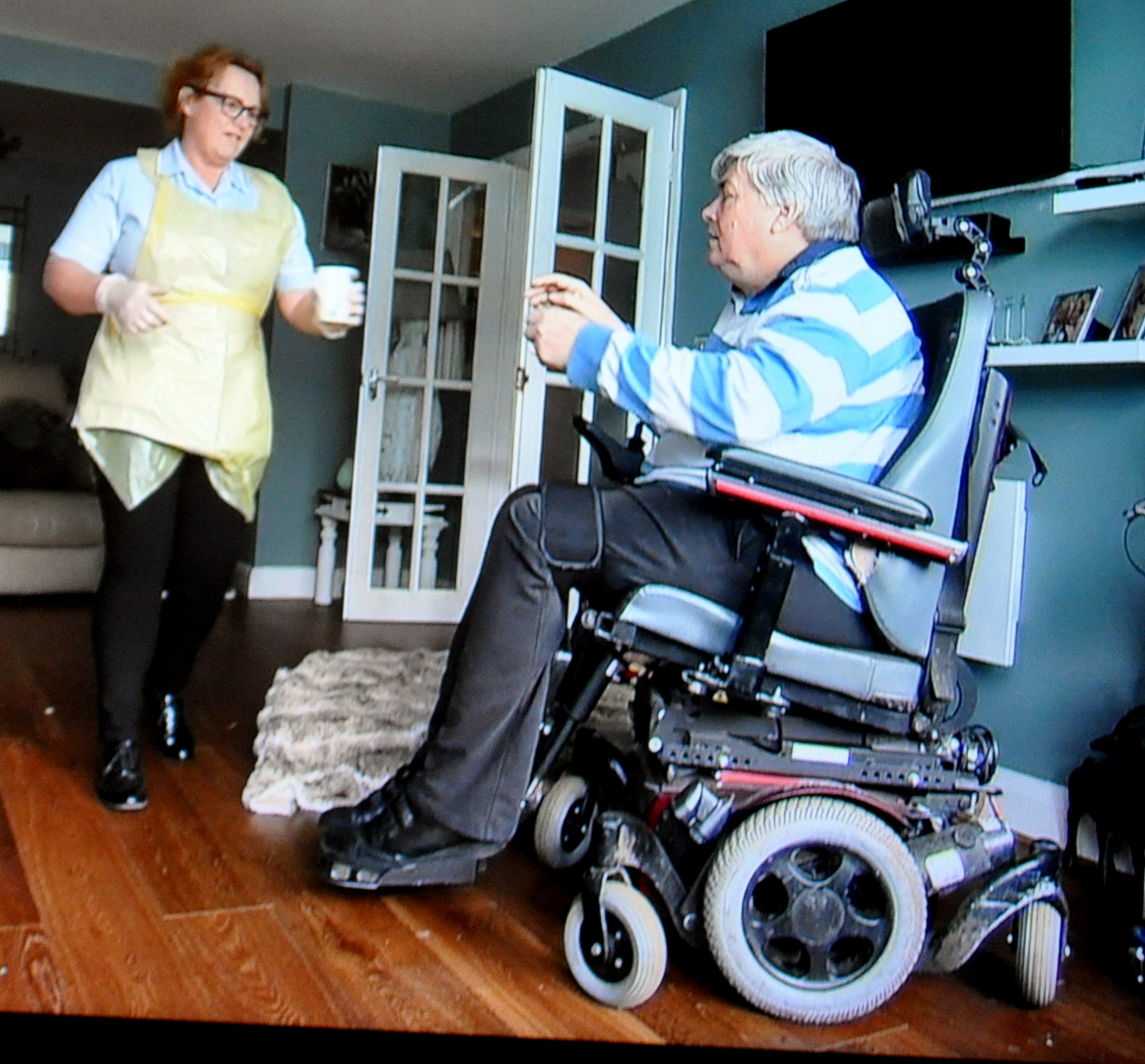 “Whilst NHS supplies have been prioritised we have seen arrangements for the care sector lag behind and the supply chain dry up.

This is part of NHS Greater Glasgow’s overall response to COVID-19 as the board aims to protect its patients, staff and wider public.

It is clear Salmond is on the warpath. The question is how far will he go? Is he willing to set fire to the house he built, just to watch his enemies burn?

Ms Sturgeon said: “We are now at the stage of this epidemic, as we expected to be, when the number of cases is rising rapidly and unfortunately that means that the numbers becoming seriously unwell and dying are also, sadly, rising.

Jackie Baillie, MSP for Dumbarton, Vale of Leven and Helensburgh has today joined calls to give free travel on public transport to all NHS staff.

VIRUS: WE NEED TO VALUE OUR HOMECARE STAFF

We may clap for the NHS, who are visible, but homecare workers are largely unseen and are not given the basic essentials they require for the challenging tasks they find inside the houses and lives of the vulnerable, writes RUTH HUNT