Police to enforce lockdown with fines of £60 and £30, same as parking 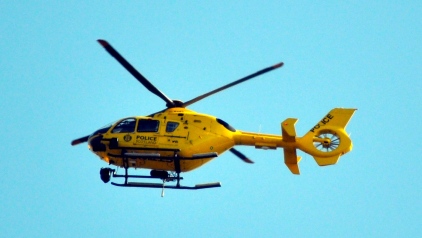 BBC Scotland is reporting that people who do not comply with social distancing rules in Scotland could be fined as much as £60 by the police, First Minister Nicola Sturgeon has said.

Emergency legislation has been passed at Westminster to curb the spread of coronavirus.

Ms Sturgeon said it meant Police Scotland could have new powers as early as today to enforce social distancing.

There have now been 894 confirmed cases of the virus in Scotland, with 25 people having died.

This was an increase of 175 confirmed cases and three deaths since Wednesday. The actual number of cases is likely to be much higher.

The new powers will allow police to hand out spot fines to anyone caught flouting the social distancing rules that were imposed earlier this week, which have left the whole of the UK effectively in “lockdown”.

The £60 fine reducing to £30 if offenders pay smartly is intended to keep the streets much quieter.

Ms Sturgeon said these were “last resort” measures, but that “ultimately this is about saving lives”. 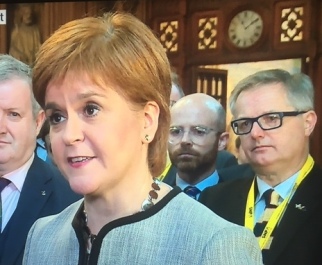 People across the UK have been urged to stay at home to help slow the spread of Covid-19 and reduce pressure on health services.

Only limited trips out of the house are to be permitted – for exercise, to buy vital supplies or to attend essential work – and gatherings of more than two people, unless they are from the same household, are banned.

The first minister, right with local colleagues Martin Docherty Hughes and Brendan O’Hara,  said that “those found not to be acting in line with regulations can be made to return home”.

And she said police officers will also have the power to give out “prohibition notices” and to close businesses and premises if needed.

People could also be given spot fines – the level of which is currently being decided – “and ultimately if necessary be prosecuted”, Ms Sturgeon warned.

The first minister said she hoped the new powers would not have to be used, with officers taking a “soft approach to enforcement” – but “they will have the power to act if that is deemed necessary”.

The first minister said she expected the “vast majority” of people to “do the right thing” and comply with social distancing voluntarily.

She said: “This will get harder with every day that passes, to stay at home and follow all of the advice, but it remains essential that we all do so.

“This has to be a collective effort. The power to stop this epidemic rests with each and everyone of us as individuals.”

The NHS in Scotland is scaling up to cope with the coronavirus crisis, and the country’s chief medical officer says she believes we are behind London and the rest of England in terms of the accelerating caseload. This means the lockdown may have a bigger impact here.

However, Scotland is still facing significant capacity issues. The authorities say they are on track to double intensive care capacity, and then want to quadruple it.

The postponement of elective surgery has meant they have are just short of freeing up 3,000 other hospital beds.

There has also been a lot of talk about “field hospitals”. One interesting point made at this morning’s briefing was that they are still saying the empty Sick Children’s hospital in Edinburgh is not safe to use.

Even if they look elsewhere, a field hospital could be for non-Covid 19 patients rather than the “fever hospitals” we’ve been seeing in China and elsewhere.

Ms Sturgeon also announced that an extra 1.5 million facemasks have been “brought back into use from the NHS Scotland central stockpile”.

These masks had passed their expiry date, but have undergone “extensive testing which has shown them to be fit for use”.

She said: “We are paying very close and detailed attention to the overall stock of PPE for our health and social care staff, and we have now taken over the ordering, supply and distribution of PPE to social care and care at home staff.

“As of today we have no shortages. We are increasing the distribution routes and networks to ensure the supplies people need get to where they are needed, including in remote and rural areas, as quickly as possible.

“The safety of our health and social care staff is of absolute critical importance, so we are taking every step we can to make sure they have the equipment they need, and we have orders in the pipeline to make sure stocks are replenished.”

REPORTER SAM’S IN POLING POSITION ON HER BIKE

So much so that she has treated herself to this little red devil to get her around when she is not pursuing major stories for the likes of Panorama or BBC Scotland’s new Disclosure programme.

This follows confirmation from West Dunbartonshire Council that it would be unable to meet the promised 1,140 hours of free early years education for three and four-year-olds and confirmation from the Scottish Government that the plan to implement the 1,140 hours would not be within the 2020/21 school year as previously planned.

Three charged in connection with probe into care home

In connection with the investigation relating to the alleged mistreatment of residents at Springvale Care Home in Lennoxtown, East Dunbartonshire, three women, aged 55, 57 and 62, have been arrested and charged. A report will be submitted to the Procurator Fiscal. Relevant families and partners have been made aware.

To help this situation, a number of public realm sites, across Argyll and Bute, including Colquhoun Square in Helensburgh, will be made available on a temporary basis to established businesses, free of charge, in a bid to help open up the area’s economy quickly and safely.

Concerns over arrest of Indy US Chief correspondent

The incident follows the arrest of Adam Gray, a New York-based photojournalist for SWNS news agency who was thrown to the ground by police, restrained and handcuffed as he chronicled protests in the city.