DUP should be forced to admit Labour is its only hope

By Newton Emerson in The Irish Times 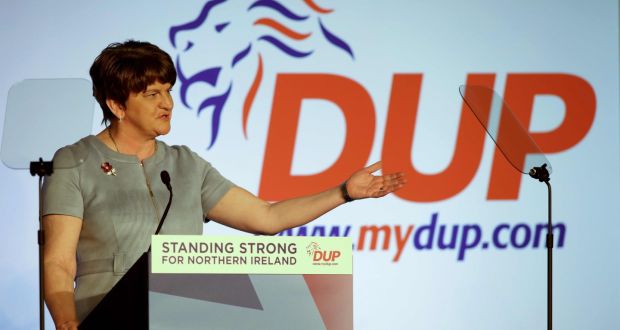 From the beginning to the end of holding the balance of power at Westminster, Arlene Foster’s party kept its options open with Jeremy Corbyn’s party.

One of the final occurrences at Westminster before parliament dissolved two weeks ago was a joint letter from the DUP and Labour’s fisheries spokesmen, the appropriately named Jim Shannon and Luke Pollard, attacking the British government over the proposed Brexit sea border.

Both parties described their co-operation as “unprecedented” but that was only true within the strict limits of this case.

In October 2017, at the outset of its confidence-and-supply agreement with the Conservatives, the DUP sided with Labour on a state pensions dispute, leaving the government humiliated.

There were many more examples of DUP-Labour dealing in the intervening years.

From the beginning to the end of holding the balance of power at Westminster, Arlene Foster’s party kept its channels and options open with Jeremy Corbyn’s party, culminating last month in Labour saying its “door is always open” and the DUP hinting it was about to walk through.

It is remarkable how many people find this hard to imagine. Although it has suited both parties to demonise each other among their supporters, the idea Labour would not work with the DUP because of political differences is demonstrably mistaken, while the idea the DUP would not work with Corbyn because he is a Sinn Féin supporter is simply ridiculous.

The DUP was in government with Sinn Féin for a decade and has spent the past three years complaining it cannot renew the arrangement. When it comes to sitting around a cabinet table with people who share Corbyn’s policies and worldview, no party in the UK can match the DUP’s experience – Labour included.

A Sinn Féin-supporting prime minister might be in a different league to a Sinn Féin deputy first minister but the DUP could easily cope if it retained its king-maker role in a hung parliament.

Several opinion polls this week make that prospect imaginable. Other polls predict prime minister Boris Johnson returning with a large majority. The phased withdrawal of the Brexit Party plus tactical voting among Remainers are adding to the complexity of forecasts.

Yet the DUP is still escaping scrutiny over what it would do with Westminster influence, even while campaigning to maximise its influence.

Logically, it must favour Corbyn over Johnson.

There has been a complete breakdown in relations between the DUP and the prime minister. No unionist party in Northern Ireland supports Johnson’s deal and no wing of the Conservative party advocates changing the deal for unionism’s benefit. If Johnson wins a majority, he will ram his Brexit through. If he needs the DUP’s help to get into office then everyone will be back to where they are now, which is not where anyone wants to be.

Labour, by contrast, is promising to negotiate a soft Brexit withdrawal agreement that would solve the DUP’s sea border problem, followed by a second EU referendum that could solve all the DUP’s Brexit problems. Brussels has vowed to facilitate the necessary talks and extensions.

DUP leaders have said their preferred alternatives to Johnson’s deal are a “sensible deal” or no Brexit but they cannot bring themselves to admit this means preferring Labour.

By refusing to accept that a Labour government is its only hope, the DUP is trying to avoid difficult questions about past misjudgments and future strategy. Its denial is becoming too ridiculous to sustain.

Is the risk the SNP would pose to the union less than the threat from Johnson’s deal?

The broadcast said the election will be close and a strong DUP team could secure more confidence-and-supply funding for Northern Ireland. Then Foster added her party “will not support a Corbyn government.”

Ironically, a Corbyn government is the best hope of restoring Stormont, as it would allay nationalist concerns about Brexit, the Tories and DUP confidence-and-supply agreements.

Setting its face against this right to the last feels like one more corner the DUP is backing itself into.

The party’s calculation is presumably that Corbyn will lose but it still richly deserves to be pressed on his possible victory. The DUP should not be allowed to quietly hope for an outright Labour majority that solves all unionism’s problems without requiring unionists to take responsibility.

Nor should it get away with opposing Johnson’s deal while rejecting the only alternative for prime minister.

The most intriguing scenario is the likeliest form of Labour victory – a minority administration propped up by the SNP in return for a second Scottish independence referendum. In theory, this is a unionist nightmare. In practice, a Labour-led government would neutralise some of the impetus for Scottish independence.

If such a government required unionist support, what would the DUP do?

Is the risk the SNP would pose to the union less than the threat from Johnson’s deal, which the DUP claims would effectively break up the UK?

Answering that question might force the DUP to confront how much it has damaged the union itself.