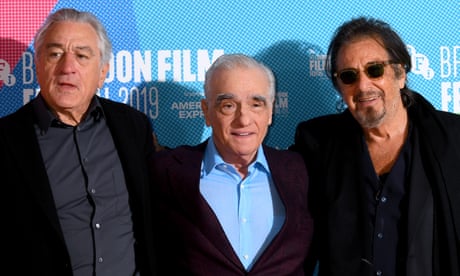 For his cast, Scorsese has assembled a trio of galacticos, a superstar repertory of players giving him (and us) performances of wintry brilliance, ebullience and regret. Robert De Niro’s stolid unemotionalism makes the purest sense here in the role of Sheeran, the second world war veteran whose military experience densensitised him to killing and more importantly schooled him in the Nuremberg ethic of following orders; he is someone who executed enemy prisoners in cold blood.

After the war, he gets a job driving trucks and doing odd jobs, and falls under the influence of two competing father figures. The first is Russell Bufalino, the senior mob guy who likes Frank’s style and taciturn efficiency. For this role, Scorsese has got Joe Pesci out of retirement and Pesci is a marvel in the role: not scary or bad-tempered as he has famously been in the past, but a quietly spoken grandfather figure, a fixer, a haver-of-quiet-words, as lined and leathery as a tortoise.

It is Bufalino who introduces Frank to his great mentor, Teamsters chief Jimmy Hoffa – a glorious performance from Al Pacino, the preening politician and local chieftain of brutal ersatz charm, in love with the sound of own husky voice. It is Hoffa who has cultivated the Teamsters’ gangster links – loaning the wiseguys cash from the union pension fund, and in return taking a slice of the interest rate, and getting mob “muscle” for when people need to be intimidated.

This is how he comes into contact with Frank, and so a great friendship is born. Frank becomes Jimmy’s factotum, bodyguard, consigliere and pal, often sharing a hotel suite with him; they get into their pyjamas together like a poignant old married couple. Jimmy is very keen on Frank’s “Irishman” nickname, wishing to distinguish him from the Italians like Bufalino and to establish his ownership of Frank’s loyalties.

But there is trouble ahead: mobsters like Russell are furious that President Kennedy (whose election they claim to have fixed) has failed to evict Castro from Cuba and restore them to their lucrative playground and that he has compounded the ingratitude by installing his brother Bobby as Attorney General in which role he is pursuing mafiosi and the corrupt Hoffa. But when Hoffa is sent away to prison for fraud and emerges furious that his Teamster empire has been taken away from him, he starts making noises that his mafiosi debtors are themselves ungrateful and he could blow the whistle on them. It is made chillingly clear to Frank where his loyalties will have to lie.

The Irishman is operatic and disturbing in the classic style, which is to say the style that Scorsese invented with the language partly provided by De Niro and Pesci. Interestingly they are both less loquacious than Pacino, but the scene is never stolen from them. There are other great performances from Ray Romano, Stephen Graham, Harvey Keitel and others. It is of course very similar to GoodFellas, but with a dourer note: these gangsters all seem older, more careworn: quite simply, they don’t seem to be having a good time they way they did in GoodFellas.

But their concerns are the same. When Frank comes home to hear that the local grocer has “shoved” his favourite daughter Peggy (played as an adult by Anna Paquin) he shows up to exact a terrible vengeance on the man. Peggy is to grow up scared and resentful of her dad and his ghastly friend Russell but affectionate towards the avuncular Jimmy. (Perhaps Zaillian and Scorsese wish to allude the traditional Sicilian explanation for the term “Mafia” – that it derives from the phrase “non toccare ma figlia”, or, “don’t touch my daughter”.)

No one but Scorsese and this glorious cast could have made this movie live as richly and compellingly as it does, and persuade us that its tropes and images are still vital. We have had ample opportunity to tire of the mob, the politicians, Florida, Cuba and so on. But Scorsese brings it back into a scalpel-sharp focus, especially with a new emphasis on Frank’s spiritual devastation and guilt: a man who had long ago amputated his ability to feel remorse and now is unable to come to terms with his feelings. It is another massive achievement for Scorsese.

• The Irishman opens in cinemas NOW and is released on Netflix on 27 November.

WESTERING HOME AND A SONG IN THE AIR

This is what the sky looked like looking West from West Bridgend, taking in Dumbarton Rock, Levengrove Park and the Renfrewshire Hills at Langbank.

SPRINGTIME IS JUST AROUND THE CORNER

Gardening question: Is this outside? I’ve been given 4 of these and I am nervous about putting them out just now. Do you think I should wait until spring and then put them out? Kay says:  This lives outside all the year round – it’s a Christmas Hellebore ( I think). Dies down on in […]

After all that rain, we deserve some fine weather in Dumbarton. Carolynn Bowman has been out and about walking near her home in Kirktonhill this evening. She brought home the goods in the form of these terrific sunset photographs and watched some ships pass on the River Clyde. The weather forecast on BBC CountryFile is […]

I offer contrasting cameos to illustrate why this might be happening. Last Saturday, an indeterminate number of people splashed their way through Glasgow, waving flags. (Incidentally, should Scotland’s Education and Justice Ministers really be sharing a march with banners which denounce opponents as ‘scum’ and “c`***s’?

In the end, it took just over a week for Prince Harry to announce and finalise the terms of his exit from the royal family. The settlement: he and Meghan have agreed to give up their ‘royal highness’ titles . They’ll still be entitled to them, but won’t use them. They’ll perform no more royal duties and – ergo – receive no more taxpayers’ money. Moreover, they’ll refund the £2.4 million cost of refurbishing Frogmore Cottage in Windsor, which they’ll keep as their UK home.

HEALTH BOARD STATEMENT ON HOSPITAL DEATHS

Our thoughts and sympathies remain with the families of two patients who were treated for a Cryptococcus infection and sadly later died. The safety of our patients is at the centre of everything we do and we encourage any family with any question or concern to speak to a member of staff so that this can be responded to personally.

THEY USED TO LOVE IT, BUT IT’S ALL OVER NOW

Dumbarton didn’t even get a mention despite the fact that they were supposed to be also the Earl and Countess of Dumbarton, where they have never so much as visited since their wedding two years ago.

NOT THIS WEATHER, IT DOESN’T …