How did I go from wanting desperately to own a massive spider to being crippled by fear at the mere sight of them?

By Darragh Geraghty in The Irish Times 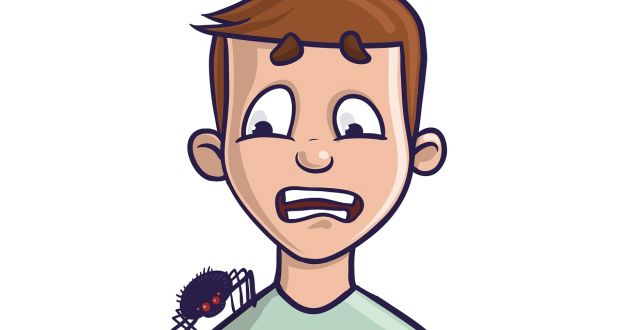 The funny thing about my arachnophobia is I used to love spiders. When I was a child I wanted nothing more than to own a pet tarantula. I took every chance to visit a pet store and run straight down to the back where they kept the gently-lit glass terrariums holding these forbidden and hypnotic creatures. I wanted to hold them and feed them dead crickets. I wanted to keep them in my bedroom like Buzz in Home Alone.

Now I can’t look at them.

I definitely can’t touch them. Even the word “spider” feels sinister. The very act of writing this, and letting my mind linger on them, has guaranteed tonight’s nightmares. Eight hairy legs, eight dead black eyes; hiding and waiting for something to kill, trapping and sucking the life out of their prey from the inside.

They are beings from another dimension, sent here to push us over the edge of sanity. This is why I can’t watch I’m a Celebrity…Get Me Out of Here.

How did I go from wanting desperately to own a massive spider to being crippled by fear at the mere sight of them?

I honestly don’t know. It is one of the great mysteries of my life. I’m clearly repressing some long-forgotten trauma, but, hey, who isn’t?

Pretending not to be scared shitless of spiders is one of the more unexpected challenges of being a parent. Spiders are our friends. We love spiders (I hate them). Spiders deserve their space in the world as much as you or I (die spider, die).

My three-year-old son loves spiders as much as he loves ladybirds and worms. Giddy with excitement he shows me a spider he has found, and in a steady voice I say something like “oh wow, cool!”, or “aw look, I think he’s sleeping. Okay, let’s leave him alone now.”

Inside I’m screaming. It is like looking into a dark void of pure cosmic terror and having to say “this is fine”.

So why do it? Why pretend?

He doesn’t know how he knows, but he knows there is nothing to fear in the garden spider outside the kitchen window. On a walk to the park he stops and marvels, actually marvels, at a cobweb on a neighbour’s gate. He puts his little face so close to study the intricate and mysteriously geometric pattern. Then he’s off again, running towards the playground and the promise of a hot chocolate. Another thing to be marvelled.

In his 1977 essay Why Look at Animals, John Berger describes a process beginning in the 19th century which has eroded our intimacy with nature, and particularly with animals.

Throughout our entire existence we have lived in tandem with animals, and in the relative blink of an eye we threw it all away. We depended on them for food and clothing, but it is a fallacy to think that is all we needed from them.

Going back millennia they played a central role in our lives. We shared our living space with them. They acted as companions; served important religious and spiritual functions. They were protected and feared, and they were everywhere. We were buried with them. Being human could not be comprehended without animals. Now they are set-dressing.

I’m not suggesting my children become eco-warriors fighting for animal rights, but I want them to keep their enthusiasm for nature.

I want them to understand the world and their place in it. We may have forgotten our bond with nature, but our children haven’t.

And it starts with a spider. A spider lives and dies and has a purpose, and in a weird way children understand the importance of it.

There will come a day when my son ignores the cobwebs and the spiders, and it will possibly break my heart a little. Or maybe not. Maybe this isn’t about spiders at all. Maybe it’s about me comparing my own life to the beautiful innocence of my son. I guess we’ll never know. Self-reflection, as we have seen, was never my strong suit.

All of this is condensed into my strained smile as my son reaches out to touch the scumbag spider trespassing on our property, and I think, you know what?

Be an eco-warrior. Do whatever the hell makes you happy. Go nuts and be yourself. Within reason, though.

Maybe chain yourself to a tree in transition year or something.

The apprenticeship levy was introduced back in April 2017, with no consultation of the Scottish Government, despite apprenticeships and skills being devolved. So far, the UK Government has resisted calls from employers to suspend the levy during the pandemic.

STURGEON SAYS NO TO GRANDPARENTS WATCHING THE GRANDWEANS

The new guidelines that were issued for childminders who are returning to work state that they can take children from four separate households. The Scottish Government has yet to issue guidelines on grandparents who are responsible for the childcare of their grandchildren.

Mr Harvie told the Holyrood parliament: “As if the pandemic itself was not enough to deal with, the world is watching with horror events in the United States, where systematic police brutality is being endorsed and encouraged by racism at the highest political level.

“Why are care homes being failed again? Surely, by now, mobile testing teams or general practitioners should have visited every care home in Scotland. Is the First Minister’s Government not letting care homes down all over again?”

CARE HOMES DEATHS ARE 52 PER CENT OF THE TOTAL

The FM said: “In my view, the figures reinforce the decision that we took last week to ease some lockdown restrictions but to do so very slowly and carefully.

Two secondary schools in Argyll and Bute are leading the way in Scottish education when it comes to delivering remote, digital learning opportunities.

“The Submarine Service is a service like no other. Once you earn your dolphins, you become part of a special team and I cannot wait to become part of that.”