Denis Staunton of the Irish Times 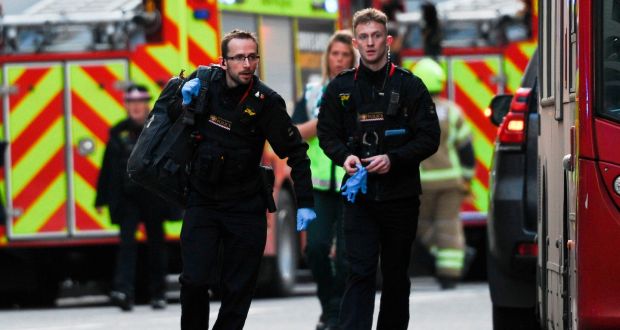 Police and emergency vehicles gather near London Bridge in England, after what was described as a terrorist incident in the area.

Political leaders have cancelled election campaign events scheduled for Saturday after two members of the public were killed in a knife attack on London Bridge that police have described as a terrorist event.

The suspect in the attack, who was wearing a fake suicide vest, was shot dead by police after bystanders wrestled him to the ground.

The Times newspaper, citing unnamed government sources, reported that the man had previously been convicted of an Islamist terrorism-related offence and was released from prison about a year ago after agreeing to wear an electronic tag.

Metropolitan Police commissioner Cressida Dick said on Friday night that three people were receiving medical treatment following the attack, which saw the assailant stab a number of people. The stabbings took place close to the scene of a terrorist attack during the 2017 general election campaign which killed eight people and injured 48.

London Bridge remained cordoned off on Friday night and Ms Dick said more armed police would patrol the streets in London during the coming days.

“Similarly, our counterterrorism detectives will be working round the clock to identify those who have lost their lives [and] to support all the victims and their families. We are also working at full tilt to understand exactly what has happened and whether anyone else was involved. For this reason we expect cordons to remain in place around the London Bridge area for some time,” she said.

Prime minister Boris Johnson, who convened a meeting of the Cobra emergency committee on Friday night, cancelled all his campaign events for Saturday.

Labour cancelled campaigning in London and Liberal Democrats leader Jo Swinson called off a Stop Brexit rally due to take place in London on Saturday.

Mr Johnson said that anyone involved in the attack would be “hunted down and brought to justice”.

The incident began at about 2pm on Friday when a man carrying two knives stabbed a number of people on the north side of London Bridge. Some bystanders wrestled the man to the ground and removed at least one of the knives before police arrived. After the bystanders moved away, leaving the man alone on the ground, police shot him dead.

The Independent Office for Police Conduct said it has launched an investigation into the police shooting of the suspect.

“At this early stage it is believed a man has been fatally shot during the police response to an incident in which a number of people were stabbed,” it said.

“It is mandatory for us to conduct an independent investigation when the police fatally shoot somebody. We have established protocols with the police to ensure our investigations do not hinder their ability to conduct enquiries as part of their related investigations.” – Additional reporting Reuters